The extension to Nykredit consists of a new building – the Crystal – sited northwest of the existing Nykredit premises. Freestanding on the site, it reads as a transparent, geometrical, glazed form which, resting only on a single point and a single line, floats as a visually light, crystalline structure above the plaza.

In terms of both form and scale, the building is intermediate between the city and the harbour, and harmonises with neighbouring buildings. On the southern side it rises with reference to the Elefanthuset’s gable apex and creates space for the main entrance. From the corner of Puggardsgade and Hambrosgade there is passage under the building and a clear view out towards Nykredit’s head office building, called the Glass Cube, and the harbour. The interior of the building is constrained by the demands of functionality, flexibility and efficiency. The typical floor plan is disposed in a Z-shape around two atria, which ensures that all workstations are well lit and enjoy a view. The disposition of the plan allows the accommodation of open plan, separate offices or meeting rooms. The building is primarily supported by a rhombic construction system placed immediately inside the façade. The system functions both as an architectural element while also allowing the building to dispense with pillars.

The building’s multi-faceted glass façade reflects both daylight and the immediate surroundings, but the double-glazing also features an integrated sun screen that allows the building to adapt to changing light conditions. In addition, the outer glazing system includes a subtle silk print design that both mitigates solar ingress and will also enliven the ambience of the harbour area.

The piazza features a large water pool which reflects the sun and the clouds moving across the sky. The Crystal and the Cloud are designed to interact with their surroundings, offering a subtle connection between the formal architecture of the Glyptotek Museum of Ancient and Modern Art, and the waterfront area which forms the setting for the new building. 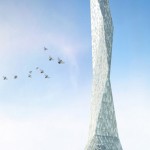 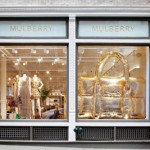