The gently curving glass skin conceals eight sloping columns that lie behind the primary bends of the elevation. Integral to resolving gravity and lateral loads, these sloping columns increase the structure’s stiffness in response to seismic concerns. Strategically placed, multi-story wind vents combined with the aerodynamic shape of the tower dramatically reduce wind forces by reducing vortex shedding. “The single most important structural parameter of a tall building is the architecture,” says SOM Structural and Civil Engineering Partner William Baker. “The CTF Tianjin Tower will be significantly quieter, with less movement than other tall buildings. We tested 18 schemes in the wind tunnel before finalizing the design.”

The 4.2-million-square-feet (389,980-square-meters) project has been designed to LEED® gold standards with a high performance envelope, optimized daylighting and landscaped green site areas among its sustainable strategies. If completed today, The CTF Tianjin Tower would only be shorter than the SOM-designed Burj Khalifa in Dubai. 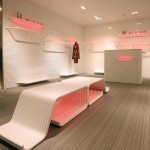 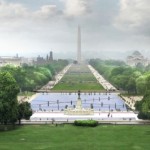