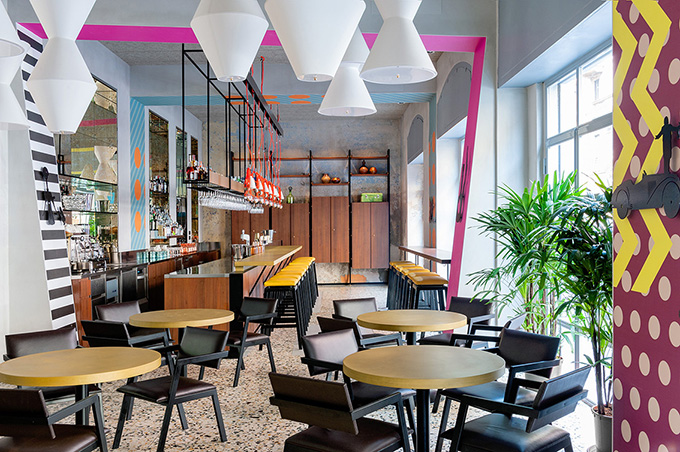 Italian Studio Vudafieri-Saverino Partners designed he new restaurant of the star-chefs Ritu Dalmia and Viviana Varese in Milan. The restaurant tells the story of the chefs’ journey around the world. The concept combines Asian influences with references to the great Milanese design, creating a vibrant, multicultural and colorful atmosphere. Take a look at the complete story after the jump. 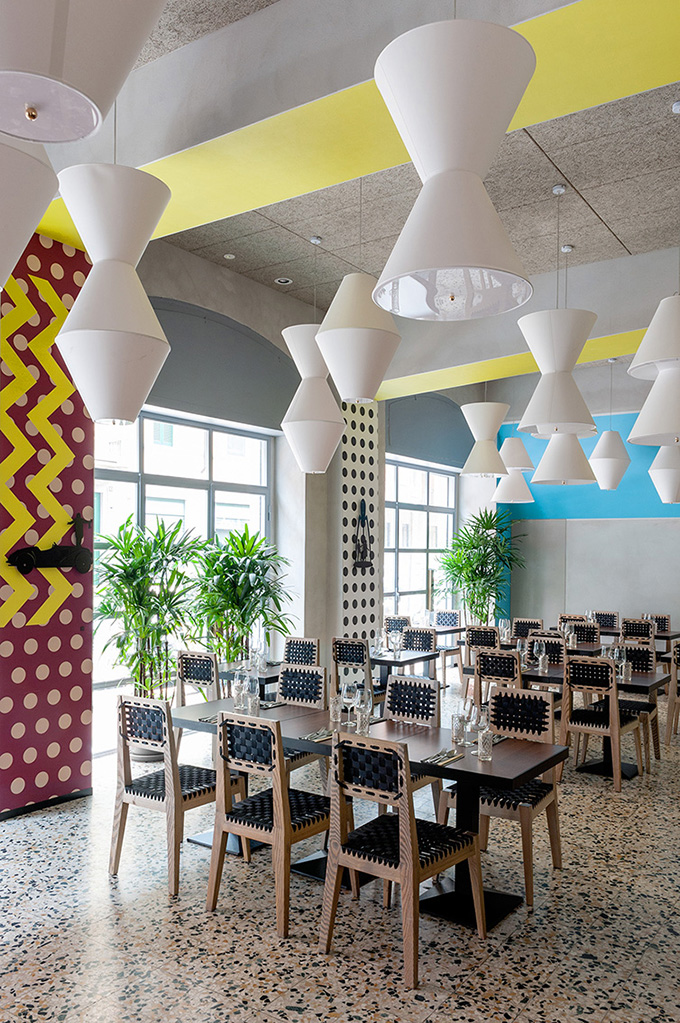 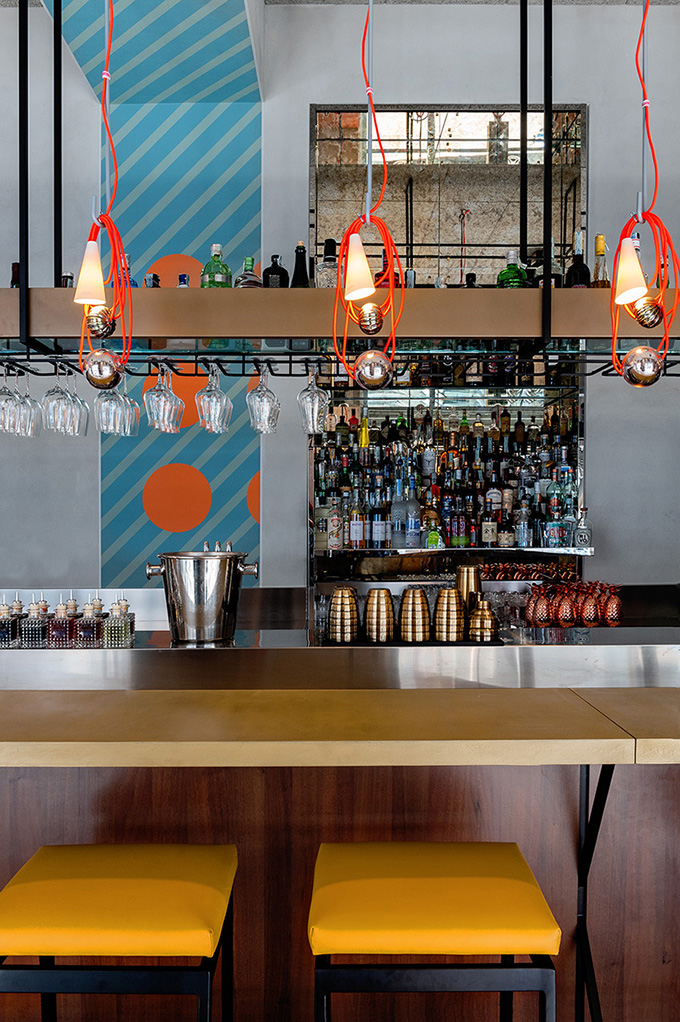 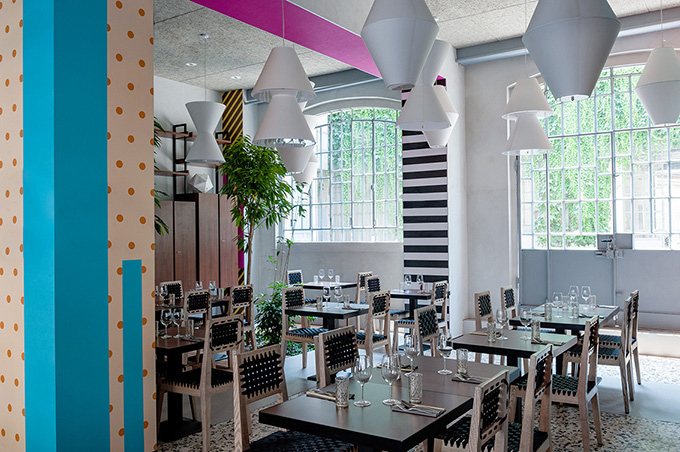 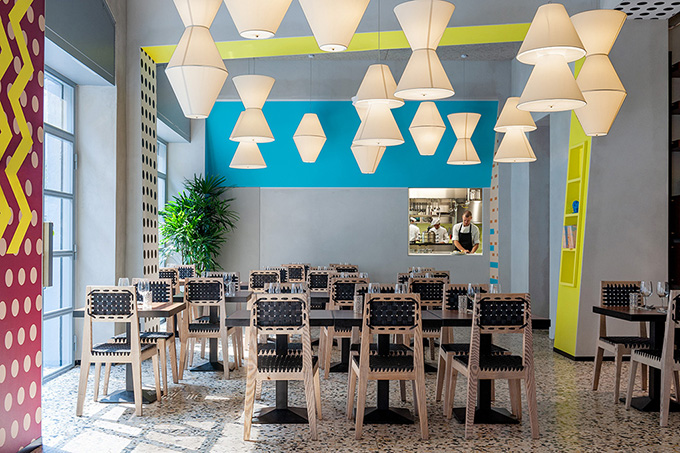 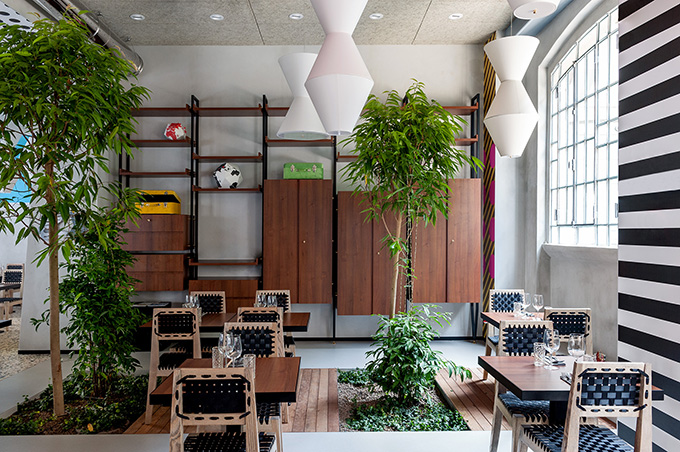 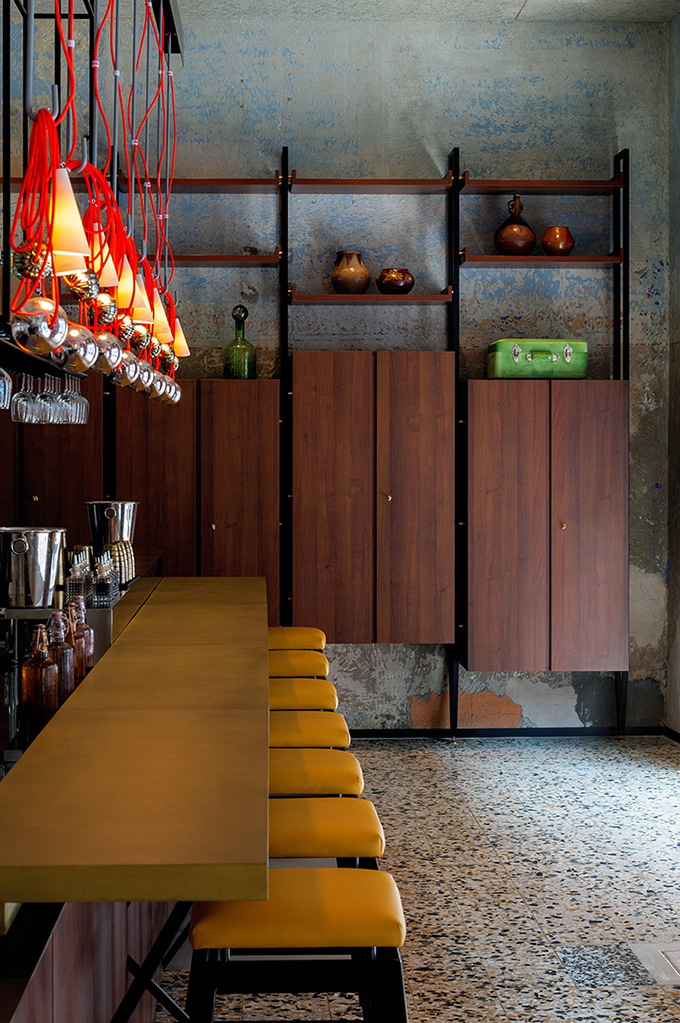 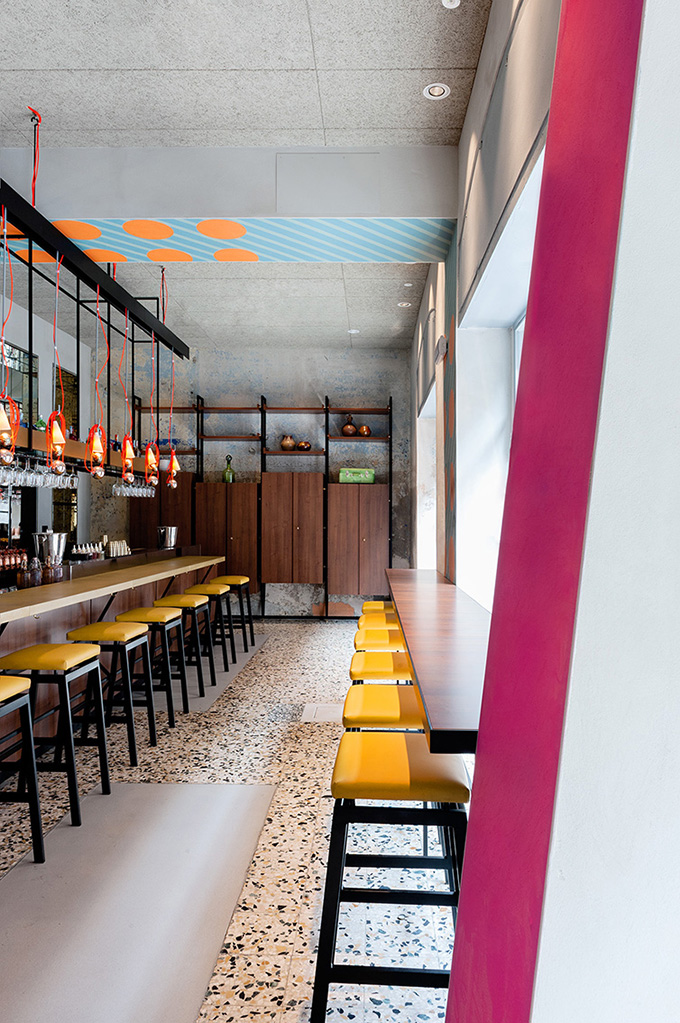 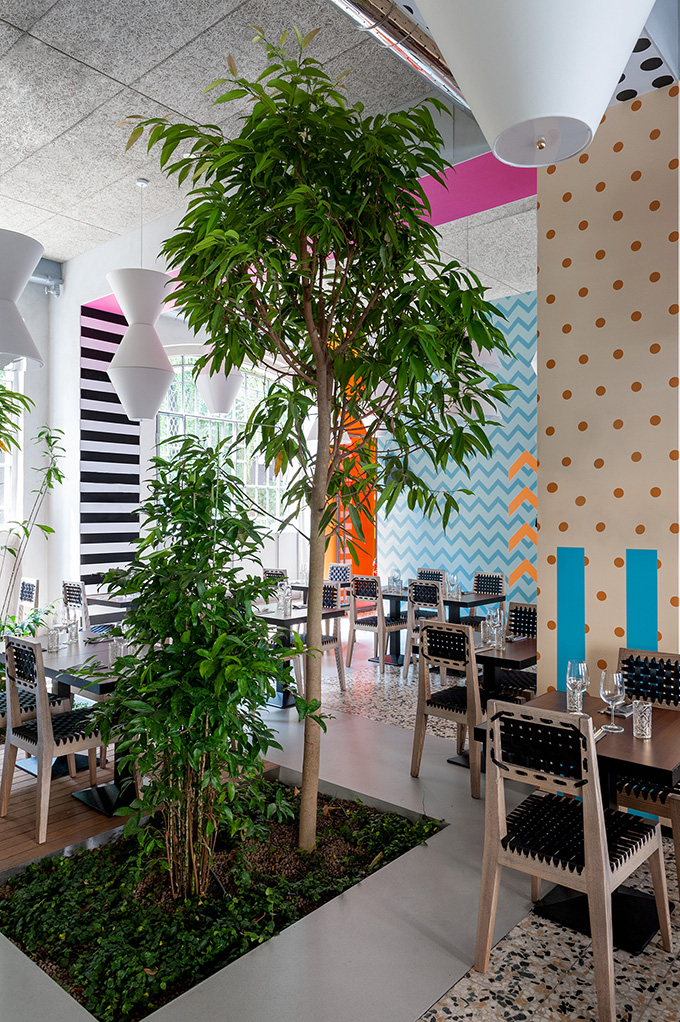 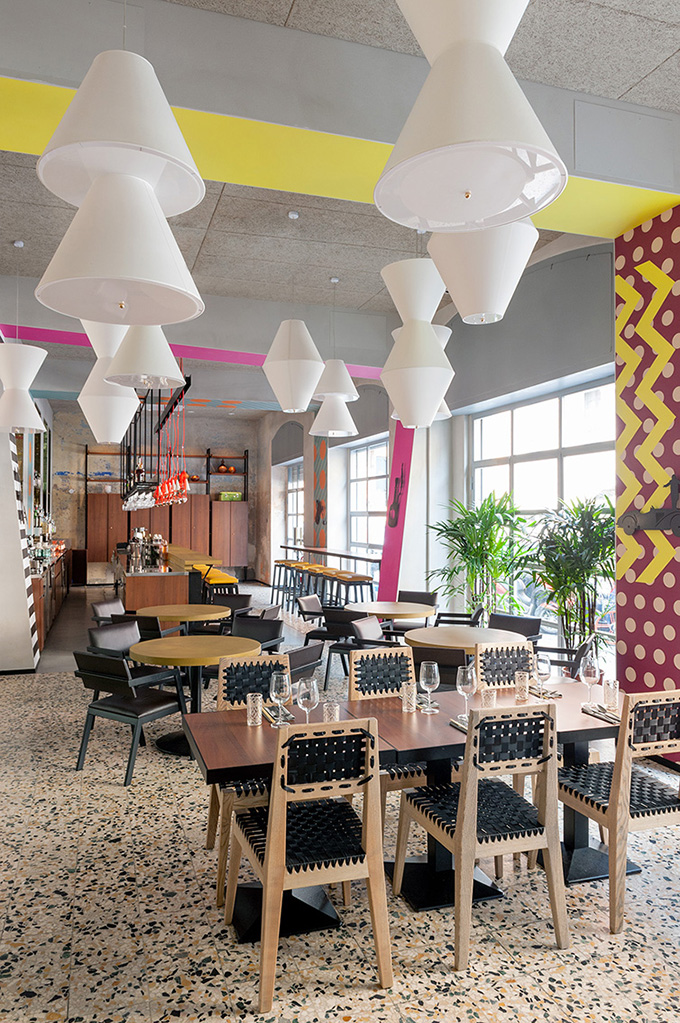 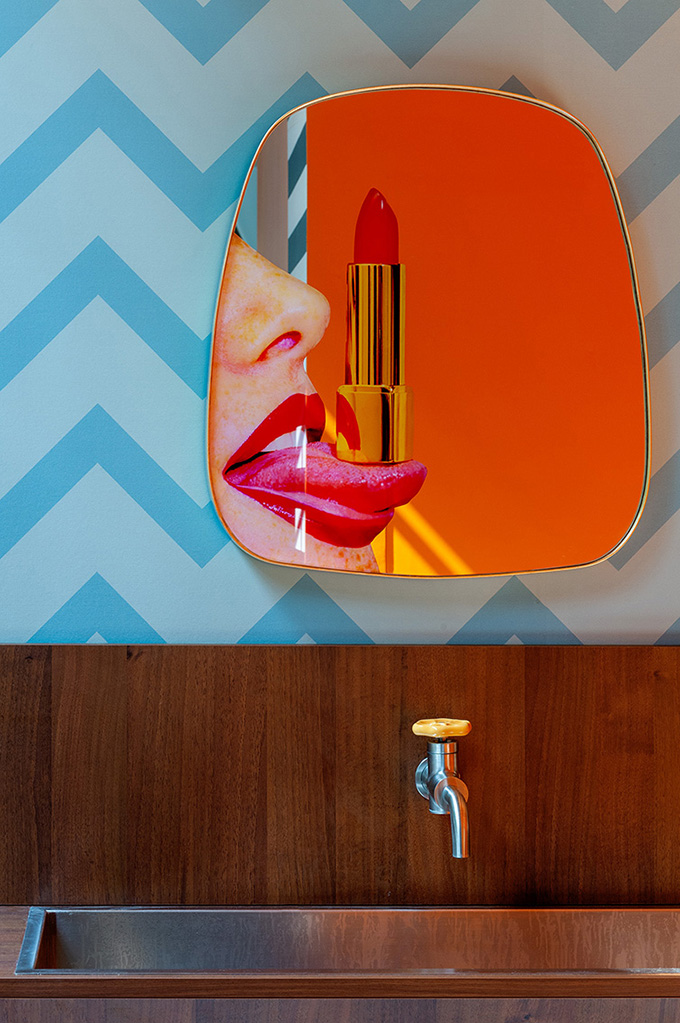 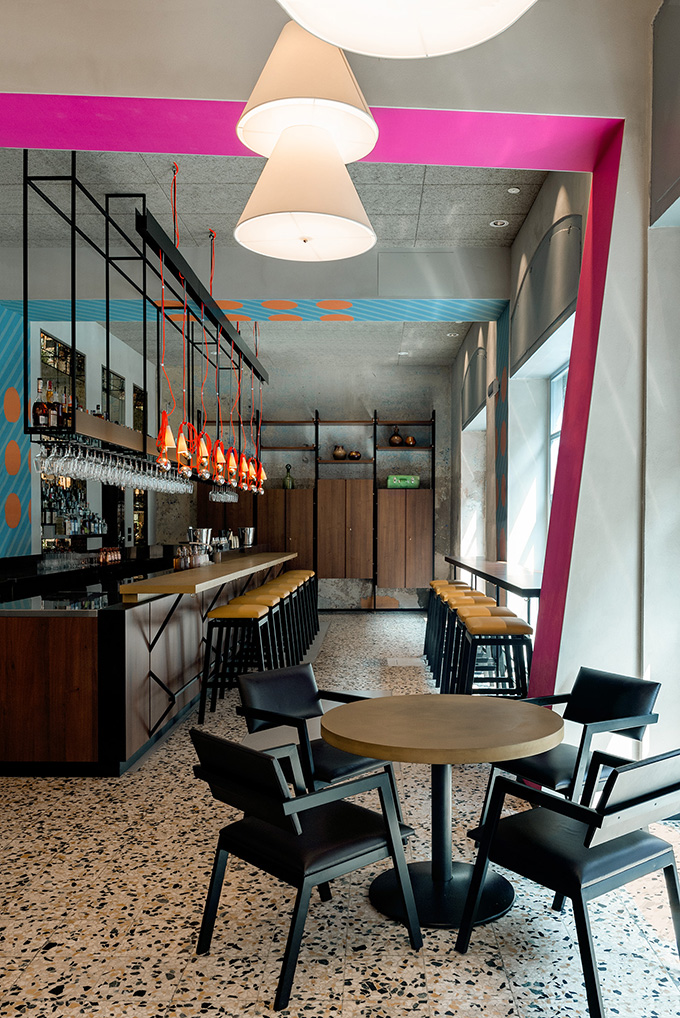 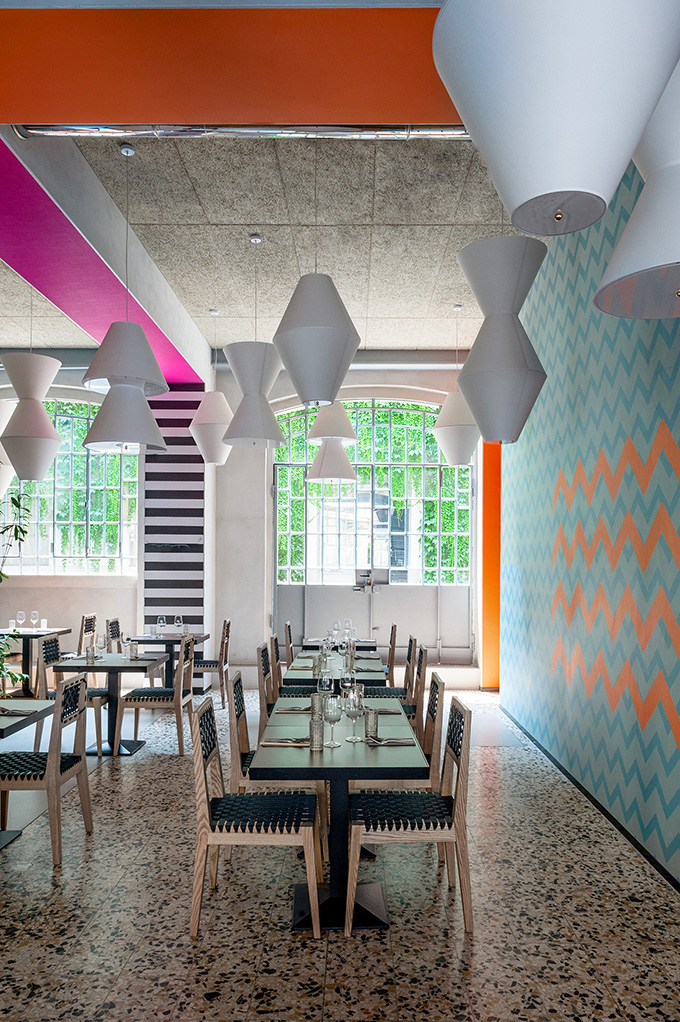 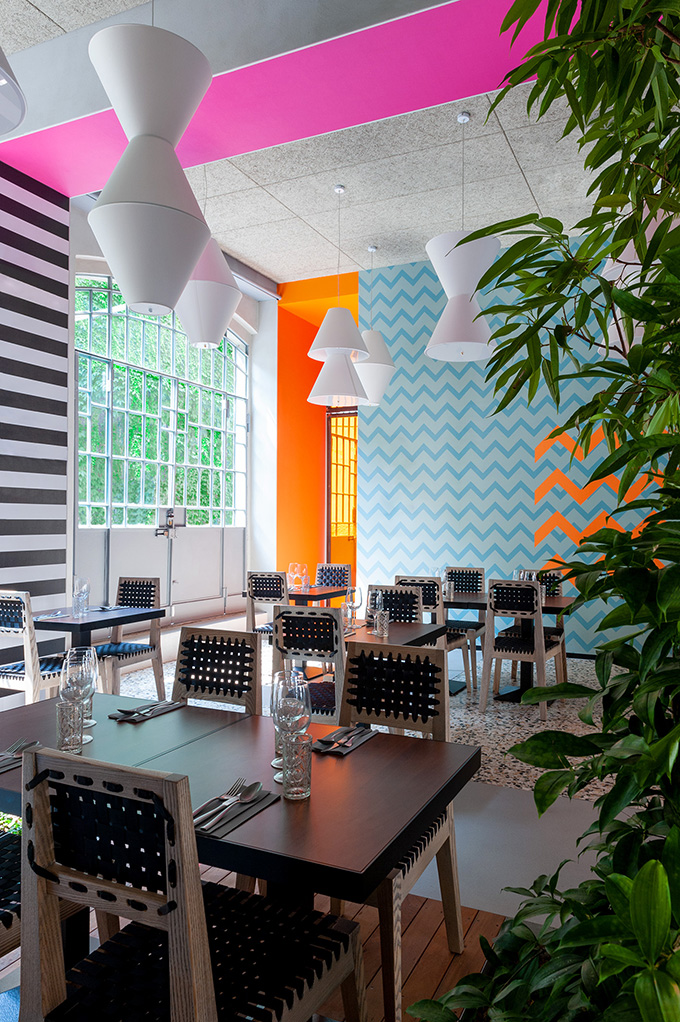 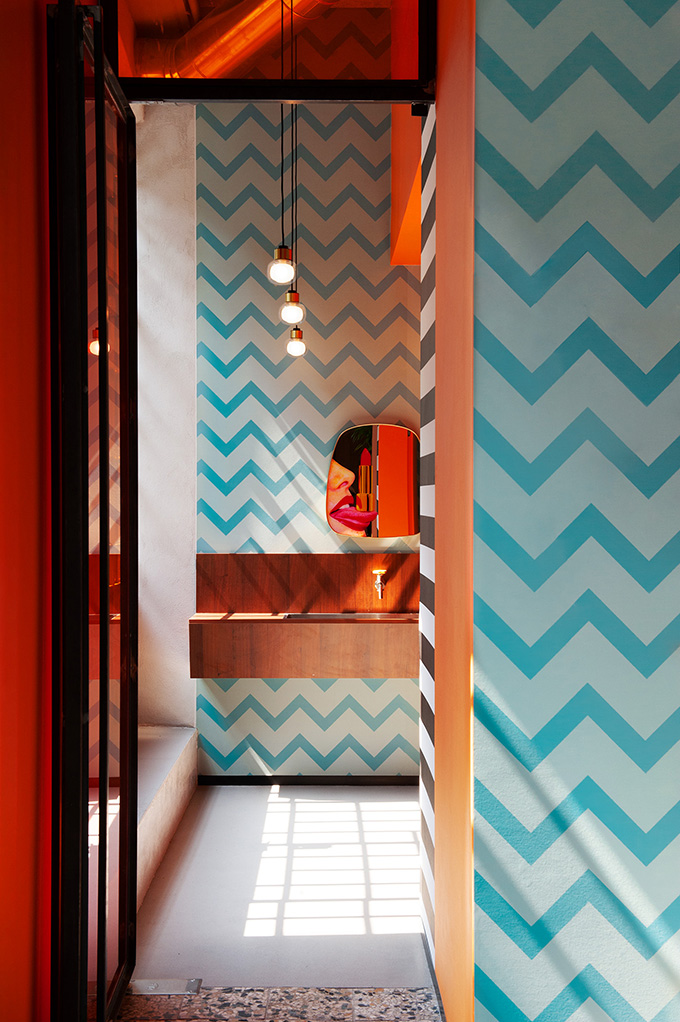 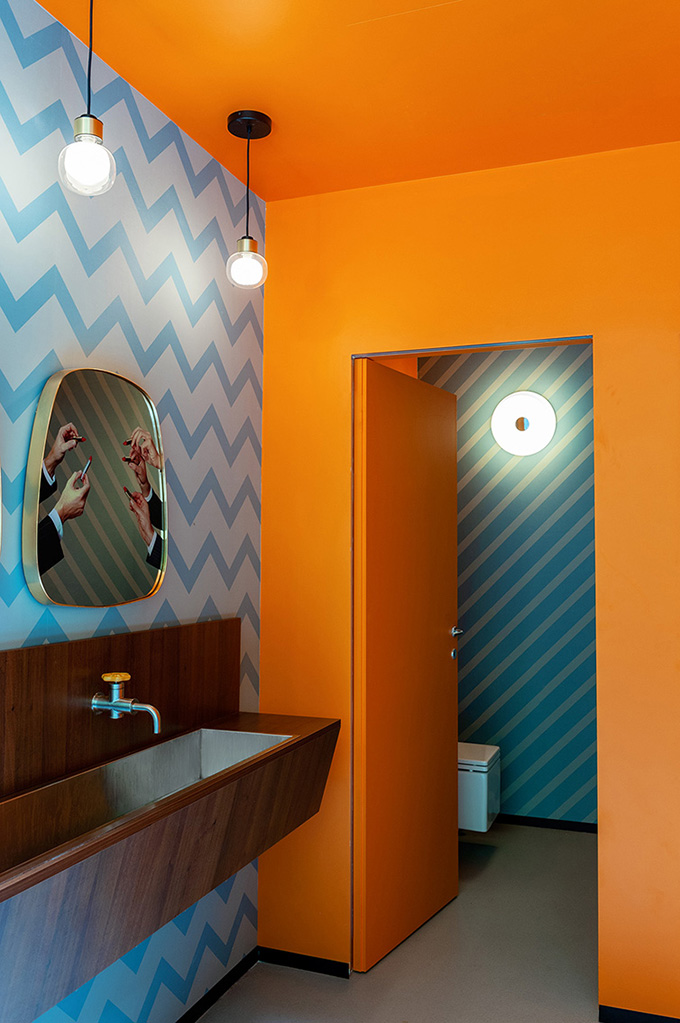 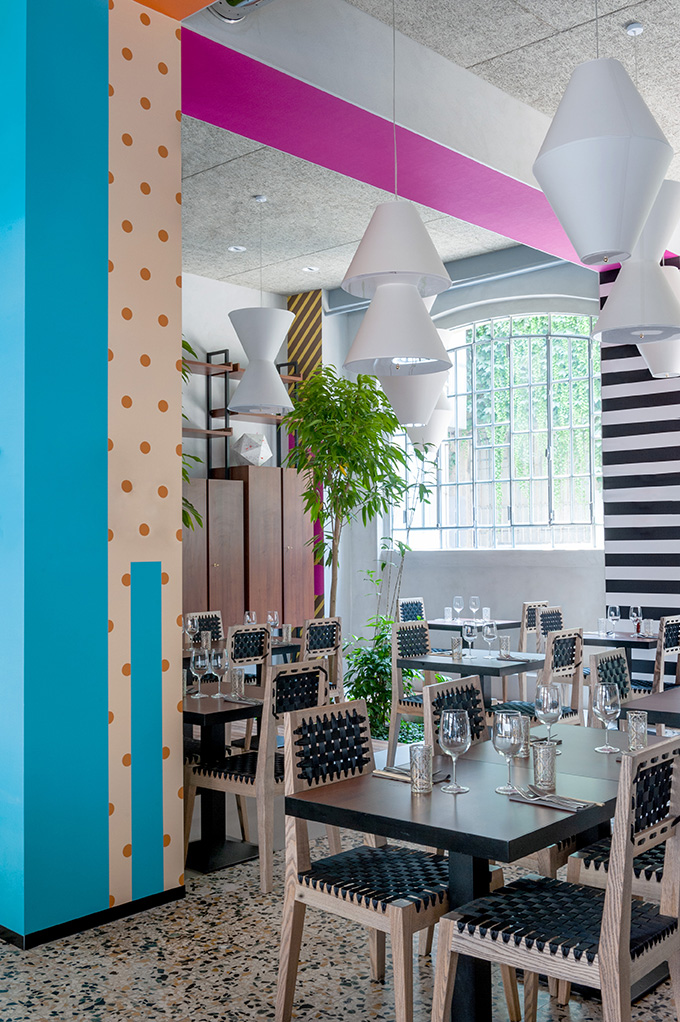 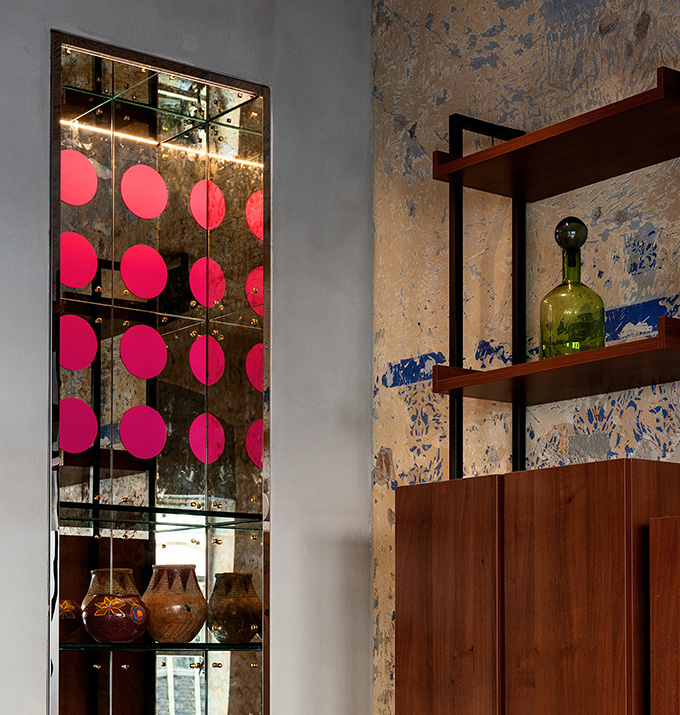 From the architects: Internationality, research and conviviality: these are the ingredients that characterize Spica, the new restaurant in the heart of the Milanese district of Porta Venezia. The two celebrity chefs, Indian Ritu Dalmia and Italian Viviana Varese, share a common passion for world cuisines: hence a restaurant that embraces diversity, offering a gastronomic journey through four geographical areas (Southeast Asia, the Indian subcontinent, Europe and America).
A journey that is reflected from the kitchen to the interior design thanks to the project by Vudafieri-Saverino Partners. The architecture studio based in Milan and Shanghai boasts exceptional experience in in developing new restaurant concepts (in Milan: Il Luogo di Aimo e Nadia, Peck CityLife, Ristorante Berton, Dry…).

The architects Tiziano Vudafieri and Claudio Saverino have designed a space capable of surprising with its unusual mix of Asian suggestions and homage to the masters of 20th century Milanese design. The result is a lively and colourful restaurant that reflects the vibrant atmosphere of Porta Venezia and its dynamic and young public.

Spica translates the story of Ritu Dalmia into the language of interior decoration. Starting out from India and crisscrossing the whole of Asia on her way to Milan, Ritu Dalmia took on board the gastronomic traditions, spirituality and hospitality of the different countries she visited. Inside the restaurant, contemporary cosmopolitan culture encounters the signs and aesthetic influences of the great Masters of Milanese design.
In their citations of Milanese tradition, Vudafieri-Saverino Partners have combined the freedom and radical design of Ettore Sottsass, with his deep passion for India, and the elegance and rigour of the modern movement of Franco Albini. Two distinct worlds that interact harmoniously in the restaurant and are reflected respectively in the architecture and in the furnishings.
The homage to Sottsass is immediately evident in the radically free style of portals, which defines the architecture of the restaurant and marks out the spaces. In contrast to the neutral framing of the ceilings, these elements are characterized by a wallpaper with colored patterns and fluorescent geometric inserts. A choice that tells the story of the stratification of cultures and the richness of colors of the countries visited by Ritu Dalmia.
The furnishings are clearly reminiscent of the great Milan masters of the ‘50s and ‘60s, first and foremost Franco Albini, who was the inspiration for the two pieces created for the entrance and the dining room. In walnut laminate, with black painted iron structure and brass details, they display ornaments evoking the places, memories and experiences of the chef’s travels.

Another reference to the Asian world and its spirituality is the space layout, following the rules of the Vastu architectural doctrine (“science of construction” in Sanskrit). An ancient discipline, born in India over 5,000 years ago, according to which the construction of houses, villages and cities should take into account the laws and influences of nature. Spica rooms face on to the cardinal points recommended by Vastu, so as to create spaces able to radiate well-being and harmony.

As always, Vudafieri-Saverino Partners have treasured the pre-existing: located in an industrial building with big windows overlooking the road and an inner courtyard, Spica retains evident signs of the past, such as the seeded floor (integrated with cement in the missing parts) and a wall brought back to its natural appearance where the layers of time are evident.

Six windows face on to the street: fully openable, they animate and lend brightness to the rooms, creating continuity between inside and outside. Each of them is matched with a coloured curtain, a prelude to the chromatic universe that is a hallmark of the interior. At the entrance, customers are greeted by an impressive 8-metre-long bar inspired by the Milanese ones of the 1960s, with its antiquated glass background, powdered brass top and long suspended bottle rack for the cocktail station. The adjacent lounge area consists of four round tables, designed by the architects, finished in the same way as the bar. The armchairs, like the stools in the cocktail bar, were created by an Indian company and are a tribute to Franco Albini, recalling the forms of his famous Luisa chair.

The big lamps in the dining room designed by Andrea Anatasio evoke the shapes of typical Indian agricultural implements, while the furniture used as a service station creates a charming corner with the wooden floor and plants on gravel, giving the feeling of being in a garden. Columns and walls are decorated with the works of Jaco Sieberhagenc: the South African artist has created a series of shapes in laser cut black painted metal, which give an ironic representation of the symbols of Italian culture, from fashion to design, from industry to gastronomy.

The bathroom is also distinguished by its fresh and colourful atmosphere, with the long washbasin with single sink and laminate shell and the iconic Seletti mirrors.

Spica offers modern, cosmopolitan and youthful cuisine. The menu is divided into four geographical macro-areas: South-East Asia, the Indian Sub-continent, Europe and the Americas. From each Ritu Dalmia and Viviana Varese have picked their favourite dishes, selected following years of travel, proposing them in two different ways, dishes for sharing and main dishes. The gastronomic proposals range from dim sum in crystal pasta and bao from China to Thai salads, Burmese soups and Japanese style ramen; from the samosa of Rajasthan to the Spanish cocas mallorquinas; from tortillas, nachos and ceviche, which make us take a leap of thousands of kilometres to Mexico and Peru, to BBQ ribs, one of the tastiest dishes in the United States.