WestendGate, also known as the Marriott Hotel, has currently being extensively modernized. At 159 meters and 47 storeys, the original structure was for a short time the tallest high-rise in Germany. Built in 1976 by the architects Siegfried Hoyer and Richard Heil in the Westend of Frankfurt am Main, the building became the path breaker for high-rise construction in the whole district and the rest of Frankfurt. Since the Marriott Hotel Group moved there in 1989, it is still the highest hotel in Europe. It occupies the top 18 of the 46 storeys of the three wing structured existing building. It has its own lobby on the ground floor and uses the second floor for a ball room.

All the remaining levels, which are accessible via a second lobby, are available for office space and building services.

Among other things, the renovation includes an architectural and energy efficient new design of the office levels, including the lobby and a conference level for the hotel as well as a new design and refurbishing of the entire façade, the installation of new solar façade modules, new building air-conditioning and optimizing of the lighting.

In addition the grounds were reorganized and designed and a new canopy was planned.

After completion of the work, a reduction of the energy use and CO2 emissions of about 36% was achieved.  That earned the WestendGate the Green Building Certificate issued by the European Commission.

Grounds and Canopy. The high-rise is located at the intersection of public green areas which are now extended by the newly created grounds. With the relocation of the underground garage exit, a large urban space for recreation was established. 1500 square meters of basalt tiles spread out smoothly into the urban surroundings, opening the space up to the city while with its new roof, it creates a new gateway to the Westend.

The organic tree-like structure of the sculptural roof is easily recognizable from a great distance. 1000 square meters of roof surface extend at one point up to a height of 14 meters, zoning in the square, with translucent air cushions filling out the construction and providing office workers and hotel guests refuge from the rain. Façade. The existing façade was completely renovated and redesigned, the pilasters doubled, and the new façade panels were equipped with additional insulation to bring them up to current energy standards. In addition vertically arranged solar façade modules are integrated on the outside.

While care was taken in the redesign of the façade to maintain the former appearance of dark façade surfaces and light gable ends, the old static and flat grace was given a plastic effect with a dynamic structuring, creating a proportionality that becomes accessible to the viewer upon approaching the building.

The façade was assembled from 3-dimensional components, which are each kinked in the vertical section, whereby the path of the kink shifts from panel to panel. As the shadow and the light reflections of the elements vary depending on the position of the sun, the façade adapts to the sunlight.

Idea and Determination of Form. The roof landscape design integrates aspects of urban development as well as spatial program and structural demands.

The flying reticulated shell, created from an inverted tree growth algorithm, is supported on the supports of the underground garage. The tree-like mesh was statically optimized with a Finite Element Analysis method to arrived at a minimal deployment of steel. The result was doubly curved surfaces, which depict the distribution of forces of the structural framework. A unity of form and structure.

This type of „associative“ design requires not only the deployment of highly developed software, but also a new form of collaboration between all those involved in the planning. The integral planning process between architecture and structural design is the basis for the high quality and economical structure. Starting with the generation of the form this collaboration continues in the communication through the exchange of data with the interactive 3D models, up to production. Execution. The supporting structure consists of steel pipes of the same diameter and three different wall thicknesses. This made possible the geometric solution of multi-axis nodal points. The pipes were welded together in several assembly units and after galvanization were bolted onto site joints. This in turn made possible a rapid, on-site assembly without welding.

The double curved, hive-like roof surfaces were fitted with transparent pneumatic ETFE plastic cushions in different shapes. Air supply hoses and cables were located inside the gutters and covered with grating. The permanently inflated cushions furnish protection against sun and rain in spite of their optical and physical airiness, offer an unencumbered view of the future new WestendGate façade.

The canopy draws in the entire forecourt, which provides access to the combined new office center and hotel driveway ensemble.

The canopy is consciously set off from the façade and the rest of the building, forming along with the newly designed forecourt an independent ensemble which reconciles the scale of the 160 meter high-rise with the urban space below. 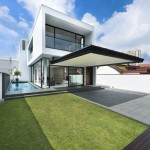 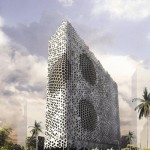