Inder House, located on a 4 250 sqf plot in a residential neighborhood of Chennai, has approximately 6 300 sqf (585.3 m2) that are organized in 4 levels. Besides the programmatic requirements of the client, their most important requirement was that the distribution of the different areas of the house, both exterior and interior, responds to Vastu´s philosophy. This philosophy provides a specific orientation for the rooms and also the rules to follow in terms of access, connections and vertical communications. Thus, the pedestrian entrance is located on the northeast side of the plot becoming the main axis in the whole house and all the communications are organized around it. Thus, the staircase becomes the protagonist element and, as a zipper, organizes the relations between rooms that are located on both sides thereof. The design of the stairs, treated as a sculptural element, and the treatment of light in this central space emphasizes the importance of this axis as a generator element and the houses 'heart'.

The house´s distribution is organized in a way were the main living spaces and the master bedroom are located on the first level, the 'noble floor' of the house, placing the other living rooms, more linked to the garden, along with the gym downstairs accompanied by service rooms and a small office. The other bedrooms are located on the second level and the third is reserved for the guest bedroom, a study and a large terrace linked to a small lounge, very important spaces for the Indian culture and widely used in a warm climate like Chennai´s.

As for the exterior design, a white stucco facade with wood elements is presented, looking for a domestic aspect through the combination of tradition and modernity. The central element occupied by the stairs is manifested as a 'flapper' to divide the house into two volumes which in turn decompose generating a series of cantilevered toward the entrance, giving a more urban scale and creating a welcoming space. The garden also becomes paramount in the house, visually expanded because of the lush vegetation of the neighboring plot. 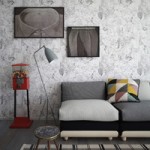 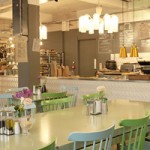