The Providence River Pedestrian Bridge is a unique urban proposal in that the basis of its proposition is an exchange of transit medium. The relocation of a substantial, vehicular only conduit in favor of a pedestrian oriented connector will completely transform the spatial character of the Jewelry District/Old Harbor. Given this significant urban transformation, the project should envision a potential much larger than a pure connector. The proposed Providence River Pedestrian Bridge can become a spatial mediator between urban and ecological spaces and function as an integrated series of programs into the waterfront public spaces, allowing east and west to become a singular meandering public space. With this perspective, the proposal is better understood less as a bridge and more as an urban intervention. More about inFORM Studio‘s Providence River Pedestrian and Cyclist Bridge submission after the break.

The alignment of this urban intervention simultaneously considers fluid movement through the city, orientation and views during the procession, and frames of view toward the bridge as an artistic object itself. Circulation of pedestrians and cyclists through the bridge is thought of as a series of tentacles gathering and dispersing travelers from numerous regions and directions. The east side of the bridge splinters into varying directions indicating subtle axis towards James Street, Transit Street, and a continuity of movement along the riverfront walk to both the north and the south. The west side is mediated with the sculpture|wildflower garden that orients travelers in four different directions. Circulation to/from the knowledge district occurs through a newly created urban pedestrian only streetscape along the south side of the amphitheater. The urban street is situated to accommodate a future mixed-use structure to the south and is aligned with Ship Street, denoting an entry into the burgeoning redefined district at the location of the newly constructed Brown Medical Education Building. A second connection is aligned with the Dorrance Street Promenade providing a more contiguous connection from DownCity into the crossing over the river. Two other sinuous connections occur meandering into a walk leading up Peck Street to the Historic Arcade and also leading north along the existing river walk.

The morphology of the urban intervention is characterized directly by the program considerations, orientation of access, views (urban and natural), and the amazing dichotomy between the history of Providence and the future of innovation. The uniqueness of the bridge form itself benefits the city more as less of an object over the river and more of an intervention into the landscape of the city with programmatic elements that serve the city in all four seasons. The urban intervention is also immersed within a duality of synthesizing traditional materials of granite and timber into programs that can feel both substantial and lacy, and weave an occupiable ground plane into a seamless connection between the east and west.

The potential programming of the urban intervention magnifies the connectivity of residential districts, commerce, tourism and culture. Further it opens potential for environmental interpretive nodes educating both residents and visitors about the history and ecology of the Providence, Seekonk and Taunton Rivers, as well as the Narragansett Bay. The success of the City of Providence developing arts, culture and tourism coupled with the vision for the Waterfront Parks; position Providence to become an international cultural destination. The design approach considers the potential of the city momentum created through events that identify the past, present and future culture of the city. Programmatic considerations such as a children’s waterscape, food vendors, sculpture/wildflower gardens, on-shore fishing, a sundeck, and a cafe are woven directly into the project.

The proposed urban intervention can be considered as three principle structural systems. Each component holds its own unique challenges and innovative design solution. Unifying the bridge design is the use of Glue Laminated Timber as the primary structural material in conjunction with discrete high strength steel tension rod components utilized on both the east and west bridge sections. These two materials, which are in dichotic contrast to the existing cold concrete structure, provide a warm traditional aesthetic through the timber framing, coupled with the lightness and grace of harnessing the tensile strength of steel.

Although not considered a part of this proposal, the proposed design recommends potential amendments to the current Waterfront Master Plan for conceptual consideration that would include a future Environmental Interpretive Center at the river edge and a future Mixed-Use Facility along the South Edge of the West Waterfront Park. The integration of these structures as public/private partnerships increases the activation of the overall plan in areas of need, and provides future opportunities to the private sector during the period of economic rebound that will eventually be sparked within the Knowledge District. 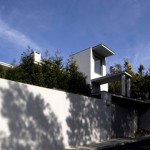 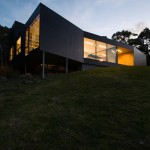