Coca-Cola's New HeadQuarters is a new interior work of the MoreySmith 's architects.  MoreySmith are thrilled to have designed Coca- Cola’s new office.
According to them: Using the brand’s iconic history, we have created a vibrant space which draws upon the positive energy of the organisation. The diversity of work spaces and unique social areas will hopefully inspire all who inhabit or just visit the building. I hope the Coca- Cola team will be very happy in their new environment.” The company’s new London base is a 1920s building which has been refitted throughout. It is set over four floors, covering 66,000 square feet and features a roof terrace, café, meeting rooms, open plan office space and hot desk facilities. The interior of the building is a celebration of Coca- Cola’s heritage and place in popular culture. The design unites the Edwardian Baroque-style front of the building, with a more modern rear extension via a staircase which runs through the core of the building. A custom-built, double-sided display wall has been installed over three floors and provides a spectacular backdrop to display the brand’s long heritage, including iconic original Coca- Cola memorabilia from its archives in the US. 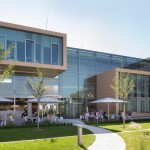 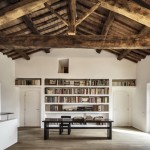