This comfortable space once was a former headquarters of the British embassy and now it is refurbished to a office space of Casa Decor Madrid with help of Egue & Seta architects. Architects has designed not only interior space but also façade of a building. For more images and architectural description go after the jump: Casa Decor Madrid 2013 opened up last week and will run until June 24th in c / Fernando el Santo 16 (former headquarters of the British embassy). This time the show organization comissioned our studio with the design of the building´s façade intervention, the wayfinding system for the event as well as exhibition space n ª 14: A gallery like hallway layed out as an excuse to bring closer to the eye the project executed at a larger scale in the exterior of the building. Tired of "slamming doors" and people walking with their heads down, we wanted to come back to Casa Decor openning up a few windows and inviting the audience to look up to sky. With "Güindous 16" instead of covering the façade, we intended to multiply its openings: we wanted to turn all the blank portions of the wall into madrid´s architectural digest. Space Nº14 is a gallery where the printed artwork outgrows the marquetry creating printed carpets, bricks, and joineries made of ink. Within a space that brings down the facade to the level of eye our team wanted, at same time, to set graphics free from their tradicional paper confinement, thus creating an interior design scheme that covering walls, floors and ceilings, ultimately aimed to release the full decorative potential of line and color. There is no embassy without its flag, and the 21st edition of CasaDecor, in the former British embassy headquarters in Madrid would be no exception. We believe however, that in this case, the standards should not stand for borders or governments: instead, dyed a vibrant red, and using changes in orientation, they prefer to guide us through the exhibition, and contribute to the festive tone of the an event that celebrates creativity and decoration . 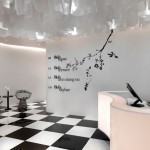 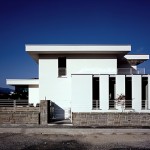