In early April, studio KNOL opened 'Out of Office'; a picture-perfect flexworking space in the center of Eindhoven. Barely two weeks later it was on its way to become the most popular working spot in town, but just when everyone was spreading the word things started to turn around… Introduced to social media and local press as the newest flexible workspace in De Witte Dame, a former industrial Philips building, Out of Office appeared to be the embodiment of freedom, suiting the work ethic of the 21st century. It offered a variety work settings such as a garden including a cuddly white rabbit, a comfy work-bed in which one could doze off in between e-mails, a coffee bar, a living room and a library area . But over time, Out of Office slowly mutated into simply “Office”. The unsuspecting workers lost their beloved flexworking areas, and were forced into a disciplined, gray cubicle office. The project is a play of the extremes. The trendy workspace turned out to be a social-architectural experiment by studio KNOL that places the hype of our nomadic and flexible work behaviour in a critical context. “Aren’t we slowly becoming slaves of our own freedom of choice? We can hardly bring ourselves to unplug anymore.” Says Celine de Waal Malefijt from studio KNOL.
KNOL was asked by modern art museum MU to participate in an art relay, which celebrates the last five months of its occupation of the Witte Dame space before moving to their new location at Strijp-S. Each month, a different art or design studio is invited to transform the museum to its own liking. Known for telling spatial stories, studio KNOL took up the opportunity to create a month-long story about our past, present and future work ethic. Why? We are witnessing a true revolution in the way we work. The commodities of the new economy are ideas and creativity and the current generation of workers demands flexibility, autonomy and inspiration. As a result, our work environment is changing accordingly. A coffee place becomes a work space (or ‘coffice’), a park or a train may just as well serve as a temporary work station. Informal and playful offices are popping up everywhere, with New Economy frontrunners such as Google, Facebook and Twitter as pioneers of this trend. We all seem to believe that hierarchy and rules belong to the dusty past of the office, and that freedom on the work floor helps create the most satisfied and productive workers.
In setting up ‘Out of Office’ studio KNOL collaborated with Anna Dekker, a social urban planner that has completed research at the LSE on new ways of working and suitable spaces for doing so. Together they translated the current trends into an interior concept that conforms to all the essentials of a modern flexworking space. Besides basics such as wide opening hours, plenty of electricity sockets, good coffee, fast and free wi-fi, the space integrated elements of play and allowed for a change of scenery to keep the workers ‘fresh’.
In the design, studio KNOL responded to the new working trends by creating a variety of thematic environments in the open space of 300 m2, allowing workers to choose the setting they felt most comfortable in at that moment. Out of Office hosted five characteristic areas that – by now – we all recognize as a workspace: a bed, a living room, a garden, a library and a coffee bar. Anna: “We didn’t want to create a completely non-work environment (such as home), we don’t want an environment that screams work either. We created a space that whispers work.”
Some consider the blurring line between formality and informality as a true liberation. We can work anywhere at any time. We can party late and sleep in, as long as we catch up on work later in the evening. We are our own boss. However, reports on the drawbacks of this freedom and flexibility in work are also proliferating. We are practically always at work. A lack of imposed discipline leaves us completely dependent on our self-discipline. Studio KNOL wants to investigate if we have gotten carried away with the trend of being extremely flexible. Would we enjoy having more set and limited working hours? Aren’t we more productive when we add some externalized discipline to our work environment? We considered it worthwhile to contribute to this debate by executing this experiment. The space underwent a physical and social transformation during which studio KNOL carefully monitored responses from Out of Office members. During the transformation we tried to find the golden mean between two extremes of freedom and control. Anna Dekker: “the goal was not to create a cubicle inferno but to honestly investigate the opportunity of liberation through an organized and disciplined setting.” Workers needed to clock in and out, but were encouraged to take and enjoy their free time. A “Big Brother” virtual host called Steve was projected on the wall, responding to the workers and their movements through motion tracking technology. Steve would keep an eye on everyone’s activity and introduce coffee and lunch breaks, RSI exercises, and demand quiet when there was too much noise.
The five different atmospheres that were so characteristic for ‘Out of Office’ gradually merged into a compact grid with 14 clear and organised workstations. Along with talented designer Christiaan Bakker, studio KNOL designed the furniture in a way that both setups consisted of the same material. With modular building blocks – 3 panels that together form 1 cubicle – the various work areas could easily be transformed into the office setting. The panels had integrated lighting and electricity. All the grey coloured building blocks for the cubicles were already present and numbered in the first setting, yet very well hidden. Pieces that served to connect or disguise the cubicle shapes were brightly coloured in reds, yellows, greens and blues. As the cubicles were formed and gravitated towards the grid, all colour dissolved, leaving behind a clean grey space. During the entire month studio KNOL has monitored productivity and overall satisfaction among Out of Office members. Joep Slagter from KNOL, also in charge of the motion tracking technology for the virtual host, analysed the results. People were very positive about the flexwork settings of Out of Office. “It’s a wonderful, creative space to think study and work in.” said one of the workers. “We need more spaces like this!” It seemed to be the ideal workspace where people could meet and work in a relaxed environment. The transition towards “Office” was therefore not much appreciated. Especially with the removal of some of the playful (and distracting) elements like the rabbit, the social coffee bar and the swing, the satisfaction amongst workers lowered quickly and made many of them to stay away eventually. However, the few workers that did come for the cubicle office, were actually very satisfied and productive. “It does help that Steve is around to keep the volume down. Working in a cubicle is less cozy but it does increase my productivity”, said a flexworker.
“We can conclude that flexworking is something very personal; most people value the freedom in their work a lot. They are easily satisfied with the basics for a flexible day plus some creative comfort. Perhaps most people did not ‘voluntarily’ choose work in the final setting, but generally noticed the positive effect on their work day”, says Joep. Of course studio KNOL expected the first setting to be more popular, and the goal of the project was not to convince people otherwise. Out of Office was an art project and by no means a full-on scientific experiment. It is a story in which people are taken along. By experimenting with the effects of social and architectural design on work performance and satisfaction, studio KNOL hopes to have contributed to a better understanding of it.
Now, quiet please. You may enjoy a cup of coffee in 5 minutes. 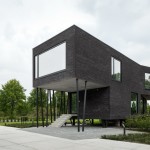 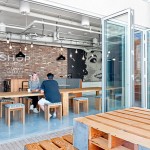