For more images and architectural description continue after the jump: Restaurant Congo at St. kongens gade 34 in Copenhagen opened Tuesday 5th February. The restaurant is owned by the danish comedian Casper Christensen and the two club owners Simon Lennet and Simon Frank that ownes Simons Nightclub. The club is on the worls finest list. Behind the interior, is the Danish design studio WAAUW, established by architect Mikas Emil.

Mikas Emil, who has previously worked in Japan and was junior architect at ARO in New York, graduated from the School of Architecture in Copenhagen and has since his graduation in June 2011 worked for Danish KiBiSi and at various art and interior projects at home and abroad.

The premises for the restaurant was that it was able to act as a restaurant and later in the evening as a cocktail bar. The owners’ desire was therefore a dark and exclusive expression where the details where hidden but still there.

To emphasize the establishment’s two functions is the cocktail bar and large dining Mikas Emil divided the two rooms with a box built out of oak, which in its warm material makes the room inbetween bright and cozy. The oak box in itself acts as a small dining area. Before the “box” was introduced this place was the least atraktive – with a low ceiling.

With the exception of Hays’ About a Chair “, chairs and lamps from Tom Dixon and Modular is all the other furnisher in the restaurant designed by Waauw studio and made by Korf Carpentry.

The restaurant has a dark carpet, which together with the high velvet panels absorbs the sound from the dining guests so the acoustics are pleasant. At the same time the panels are dividing the space in height and gives a visual impression of higher ceiling.

One side of the wall is decorated with a milled pattern that shows many different skulls merge together. Mikas Emil has been drawing the skulls in hand and later modeled it in rhino (3D program.

The overall idea is that by first impression the restaurant looks black in black and then slowly all the details emerge as one moves through the restaurant. 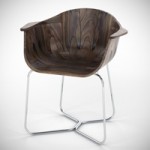 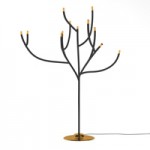