y.ad studio have recently completed their latest project in Jijiadun Village, Jinxi Town, Kunshan. The architects intended to disrupt certain conventional conference patterns and create a unique, pleasant, and peaceful ambience for this village-based conference facility by using various types of space and utilization. Discover the complete story after the jump.

From the architects: The project is a countryside conference center where architecture and nature, indoors and outdoors, light and space are interwoven.

Located in Jijiadun Village, Jinxi Town, Kunshan, the site used to be the office building of the village committee, and was later transformed into a public activity space for local villagers. The first floor used to be catering and reception space and the second floor served as a restaurant. For functional adjustment, the building again needed to be transformed and upgraded. The client hoped to limit demolition and maximize the reuse of materials and walls while achieving functional and aesthetic upgrade. During site investigation, the architects were impressed by the harmonious fusion between indoor and outdoor spaces, architecture and nature. Consequently, the team decided to retain the original form as much as possible for facade renovation through an approach of micro intervention and partial renewal, while focusing on the existing atrium space that blurs the boundaries between indoors and outdoors.

After careful analysis, the architects reorganized the space so as to meet the client’s various functional needs for conferences and other events.

The first step was to redefine the entrance. The original interweaving layout of building, walls and courtyard eliminated the boundaries between indoor and outdoor spaces, so that the building could be entered from any direction. However, this weakened the presence of the main entrance. The original main entrance was a semi-enclosed courtyard space, which was winding and narrow, lacking visual identity. As the architecture was planned to be repurposed for conference use, it needs a clear and guided entrance. To that end, the architects removed the many enchanting courtyard walls and openings on the south side, widened the way into the main building, and blocked partial corridors. The existing bridge over the pool was also widened, so as to highlight the main entrance.

Secondly, the space was redistributed. On the second floor, the original restaurant is preserved, and conference rooms of various sizes are reconfigured to cater to different needs. Meanwhile, the courtyard is integrated with space for tea, coffee, resting, and work. On the north side, the original semi-outdoor corridor is incorporated into the indoors to form a large multifunctional conference space.

For this village-based conference space, the architects wanted to break some established patterns of conferences and to create an interesting, comfortable and relaxing atmosphere through different forms of space and usage.

Originally, there was an indoor-outdoor circulation loop connecting the two roof platforms on 2F and the suspended corridor. It also linked a series of outdoor atriums and the indoor terraces on the second floor, which created a maze-like experience. However, the loop was interrupted when the former exhibition hall was transformed into a multifunctional conference room, and the suspended corridor and vertical staircase in the hall were subsequently removed. The architects reorganized the circulation routes because it became inconvenient to connect the second floor to the indoor space through the outdoor terrace. And a new vertical staircase compatible with the landscape is added in the atrium, while the rest of the vertical circulation routes remain unchanged. Originally leading to the interior through an outdoor terrace, the previous circulation route on 2Fis made connected to the indoor space directly by opening windows and adding a staircase. The main entrance leads to functional areas in three directions: forward into the multi-functional conference room, left into the office are aor the conference rooms on 2F through the atrium, and right into the café and restaurant area on 2F. The architects created a new main circulation route while also maintaining the walking experience of the original space.

Internal, external walkways and courtyard spaces in the original architectural space are converted into transitional spaces with varying visual effects and functions. The architects retained the original state of those spaces to the maximum extent, whilst enabling them to shift and integrate more naturally.

Interweaving of interior and outdoors

The indoor and outdoor spaces are interwoven, in the same manner the architecture blends with nature. The architects have preserved the breathing spaces and plants in the original building as much as possible and juxtaposed them in a way that both isolate and intermingle by creating framed views.

“Viewing and being viewed”

The architects did not want the spaces to be separated from each other after repurposing, but intended to create more connections between the multifunctional conference room and the atrium. During site investigation, the team found that the wall in the middle was quite massive with a thickness of 60cm, and hence decided to carve out vertical and horizontal openings to create frames with different viewing angles, in an attempt to create a visual effect of “viewing and being viewed” in the space by combining landscape and opposite views. In this way, the spaces become more fluid and interconnected. 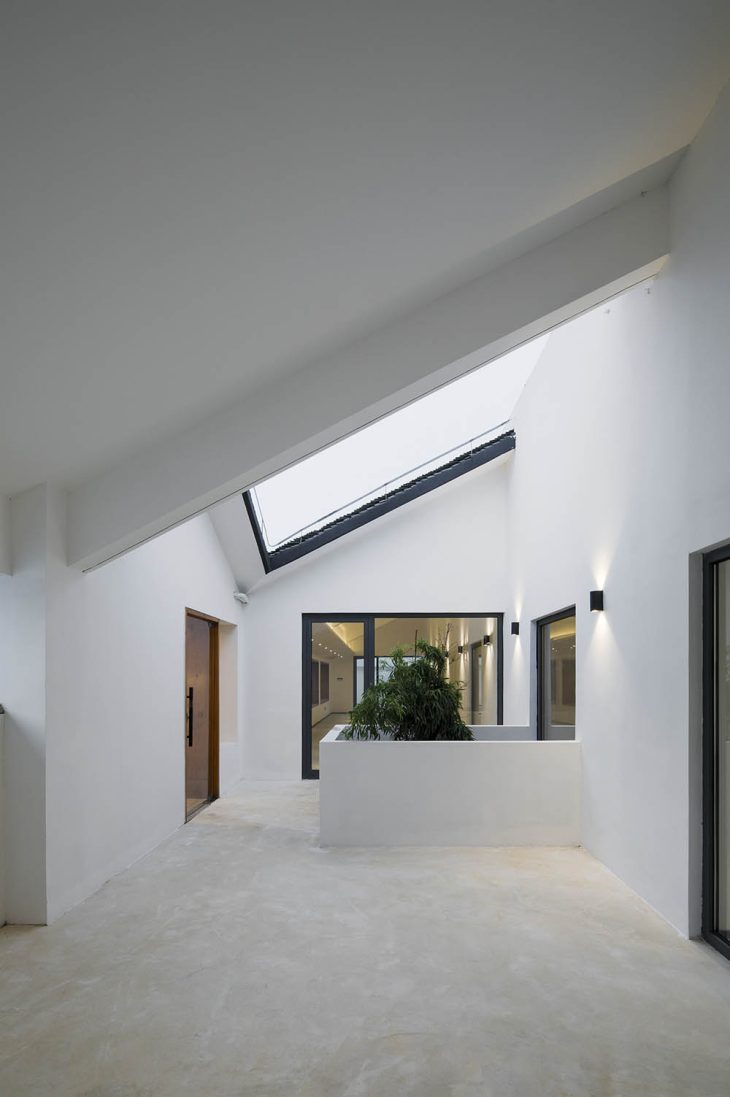 The existing daylighting atrium is preserved and given a different light atmosphere and expressions through design intervention. 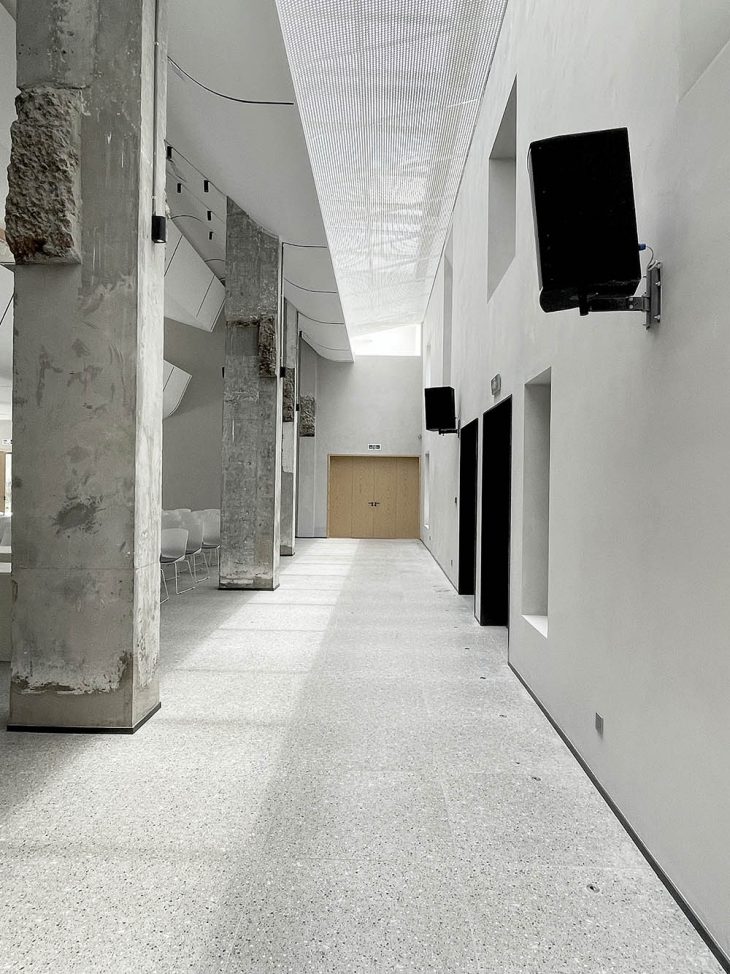 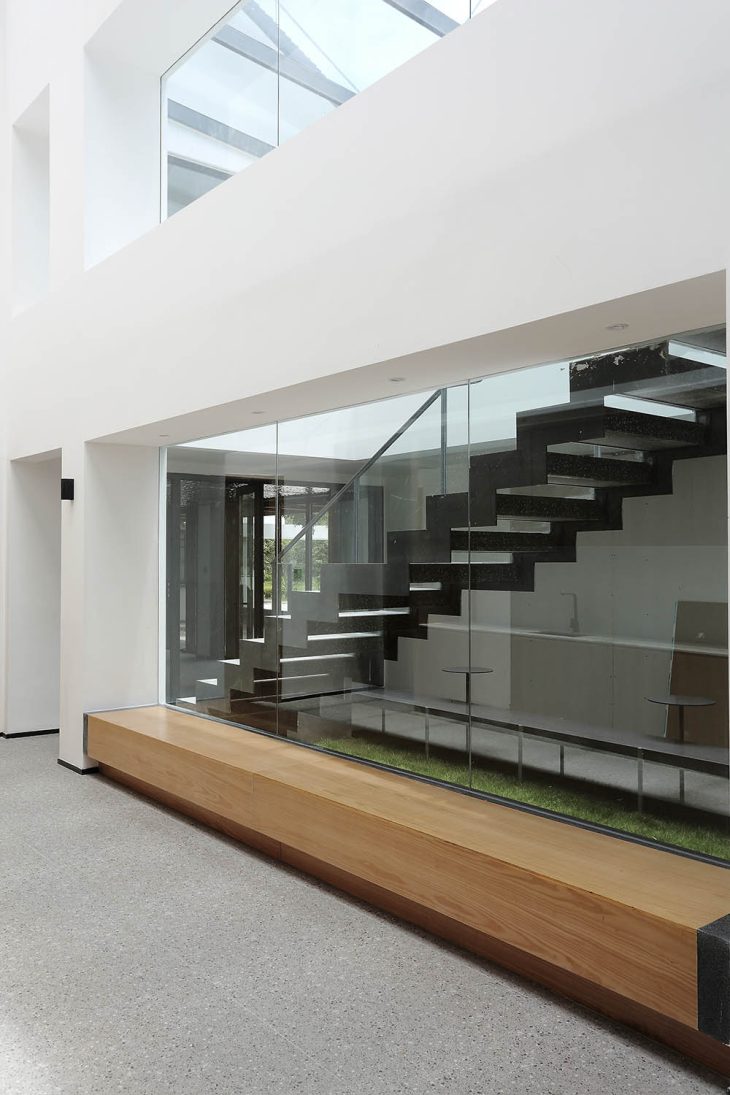 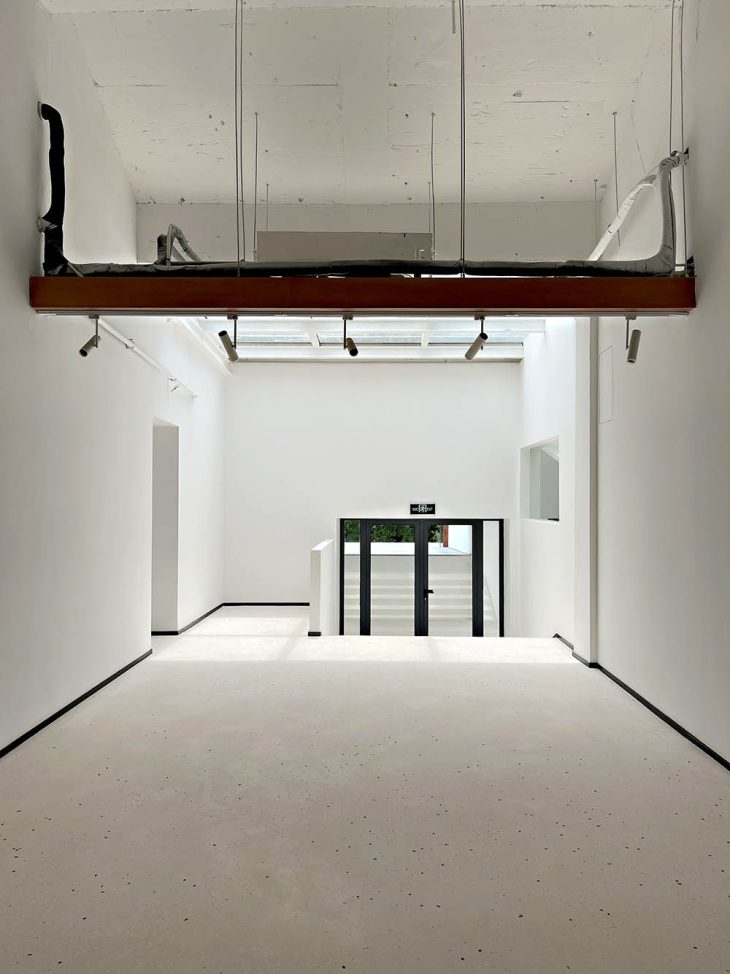 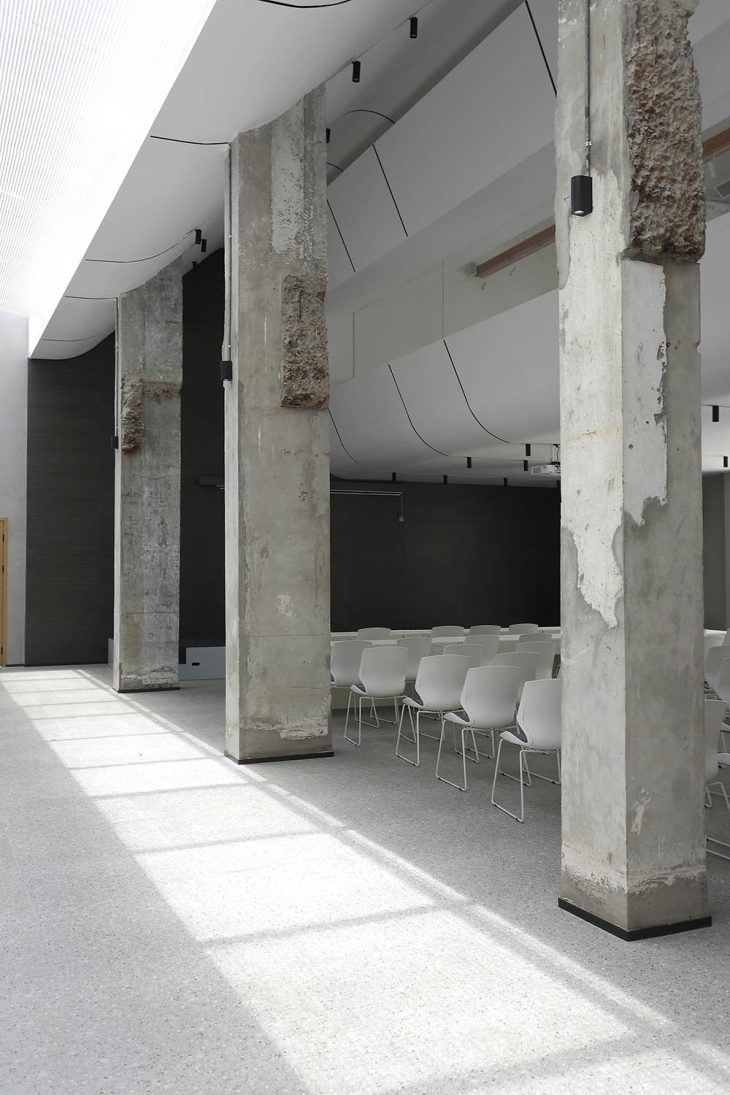 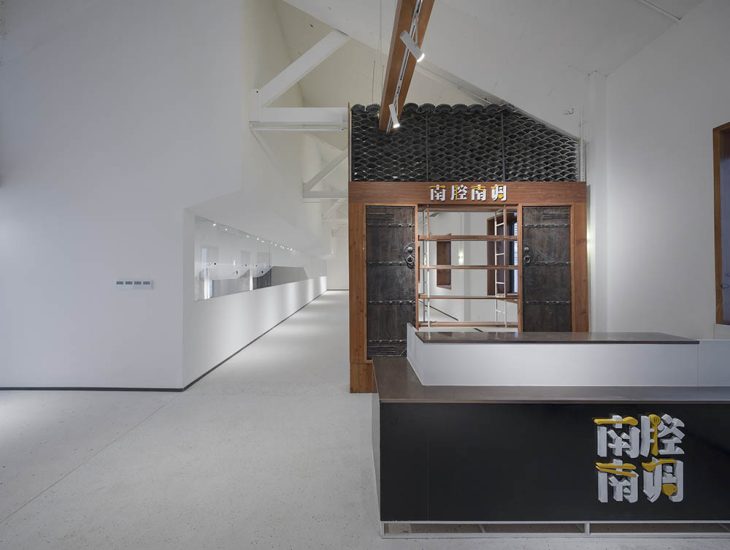 05 Contrast and integration of the old and new

The rough cement columns and old timber were preliminarily planned to be demolished or repaired. Nevertheless, during the construction process, it was discovered that some traces need not to be covered up or updated and hence were kept as before. The contrast between the rough cement columns and the delicate ceiling, along with the dialogue between the old wooden cabinet and the renovated walls, creates a dramatic visual impact, revealing unexpected appeal, aesthetics and complexity. 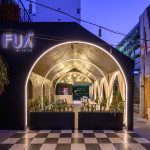 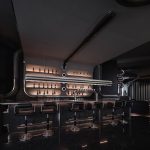