The climate is changing behavior. The Copenhageners can look forward to fewer but heavier rain showers, as the city has already been experiencing over the last two summers. “The increase in rainfall is a major challenge for our city. But by tackling the challenge the right way, we can secure the city from cloudbursts while also bringing the city new recreational values. The ideas in Saint Kjeld’s Neighborhood are a really good example of this,” says Technical and Environmental Mayor of Copenhagen, Ayfer Baykal (SF).

The obtained area counts potentially 50,000 square meters and is to be used for new urban space development. It is also an important parameter not to compromise the city’s existing functions. In the large urban spaces, such as Saint Kjeld’s Square and Tåsinge Square the office has put a great effort into creating new kinds of urban experiences founded in the city’s and nature’s changeability. A gigantic floating ring sprays a cooling rain mist out on the hot summer days, hundreds of plant species secures an attractive nature all year round and a hilly terrain invites you to play and stay.

“At Saint Kjeld’s Square and Tåsinge Square we optimize the terrain effectively doubling the urban space’s surface area. This provides new space for a comprehensive volume of natural value, a better micro-climate and hence more urban life and better rain water management. The large spaces will be both striking and natural hot spots in the district. It is also possible to integrate new cafes and playgrounds in the optimized terrain,” says Partner in Tredje Natur Flemming Rafn Thomsen.

The project introduces bicycle paths that act as storm water channels, water towers, green roofs, urban gardens, green houses and canals that carry water out from the neighborhood to the harbor. And simultaneously give rise to greater biological diversity in the city. These are just some of the ideas for new ways to adapt to the climate change that will emerge over the coming years. The City of Copenhagen plans to transform the densely populated neighborhood into a showcase area for climate adaptation technology. It is hoped to become a place that exhibits how we at one hand ensure our cities to future climate challenges, and moreover upgrade our urban spaces and streets significantly.

“By far the greatest challenges our society face lies in the existing city. The goal is to upgrade the city to residents’ expectations as to how the city must perform in terms of sustainable, social and health related issues. Our key concepts are driven by the notion that a coherent and natural design creates the most powerful strategy and solution for the neighborhood as a whole, but also comprise a sensitivity to individual spaces, places and the people in the area,” says partner in Tredje Natur, Ole Schrøder.

Adaptation to the climate changes should not only deal with larger sewers or rising taxes. Therefore, the project will instead operate with the city’s visible surface and make the city greener, so that water is both delayed and the urban spaces are simultaneously transformed into wondrous places for the city’s residents to hang out or exercise.

“In Copenhagen we must secure the city against the heavy rains we expect in the future,” says City Architect Tina Saaby. “The projects in this neighborhood show how we at once can create beautiful, green streets and spaces and at the same time establish an effective technical solution that leads the rainwater in our streets to the harbor – instead of into our basements. It is architecture that integrates art and aesthetics in a new and very exciting way, “says Tina Saaby, City Architect of Copenhagen. 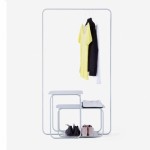