Last August, CFA (Colboc Franzen & Associés) has been invited to compete for the construction of public facilities and housings in Munich with 15 other international teams. On december 2013, the agency has won the 2nd Prize. Among 16 international candidates allowed to the competition, CFA and its team – Topotek1 (landscape, Berlin) et IB Hausladen (structure engineer, Munich) – has won the 2nd prize of the competition for the construction of a cultural centre, public facilities and housings in Munich. 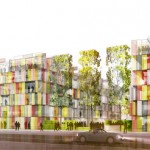 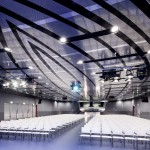