Michael Labory and his partner Bertrand Schippan would like to share with you their last project: Au Fil du Temps.
It was designed for the Europan 12 competition, on the site of Munich, Germany. For more images and architects description continue after the jump: Throughout its history Munich has been rapidly growing, however the growth, both at the scale of neighborhoods, as well at the scale of the city was not always sustainable or well-managed. It caused whole areas to be poorly connected to surroundings and suffer from outer environment intrusions in the form of noise, pollution and lack of common public spaces.

01. Density: Extra program
Situated on the busy traffic artery of Munich, the site naturally needs noise protection on the one hand and densification on another. The latter will contribute to limiting the endless city sprawl and integration of the neighborhood into its surroundings.

02. Comfort: Acoustic buffer
Noise pollution from the heavily trafficked Bacherstrasse is the comfort-killer for inhabitants of this area. Peace and tranquility can be restored by wrapping up the buildings in an acoustic buffer, made of movable glass panels. Being extension of existing walls and balconies, the created space is defined by both private use – as terraces, extra rooms or galleries – as well as communal use – large loggias, gardens or passages. 03. Sociability: Sharing spaces
The activated rooftop areas become a communal place for rest, communication, barbecue, gardening, meeting space, and playground. Their south orientation contributes to the liveliness of the densified roof tops and makes them more appealing for the residents.

04. Green: Acoustic landscape
Landscape design is a powerful noise abatement measure. Landscape elements are arranged with increasing heights towards the edges of the site. Together with a ring of tall trees surrounding the whole site, such arrangement forms a natural soundproof system. Not only will it block the noise from the road, but also will contribute to the creation of quiet, cozy courtyards and will help with easing air pollution. 01. Existing plan
The existing apartments plan doesn’t allow any flexibility in the organization of the rooms. Existence of fixed, unmovable elements, such as structural walls, shafts or separation walls blocks the possibility for creation of flexible living space.

02. Cleaned plan
The first step to create a flexible typology apartments is to get rid of separation walls in order to clearly see the available space. It becomes evident that the total space is not optimally utilized due to inefficient distribution of structural walls and shafts.

03. Freed plan
By sweeping off the walls to the edges of the apartment, grouping shafts, avoiding creation of heavy wall groupings and enlarging windows, we maximize the usable space. Major upgrade of the total surface brings up an optimized apartment typology. 04. Neutral plan
Water pipe connections often tie the residents to using a given space for a single function. To avoid this, we create a virtual grid, by means of which we uniformly distribute water pipes connections throughout the apartment. The grid divides apartment into zones with size suitable for use in any function. Such system breaks fixed connection between functions and apartment zones, allowing residents to assign any desirable function to any zone, at any moment.

05. Furnished plan
For complete space optimization, zone-specific equipment and furniture is embedded into the walls. A sample catalogue of “Furnished walls” with identical dimensions brings in everything needed: kitchen equipment, library, single/double bed, sink, shower, bath, wardrobe. The system allows to “wall-in” (close) the furniture not currently in use or to “wall-out” (open) when you need it. Tailor your space as you wish.

06. Adaptable plan
The time we spend in different rooms varies drastically, however it is not always proportional to the space rooms occupy. For instance, for average only 2 hours per day in the bathroom, it does not seem fair to devise a space too large. Why don’t we use it as a part of living room for average 6 hours or may be as bedroom for 8 hours? We could do it if we moved the walls. As the last step we place movable walls following earlier imposed grid. In order to create isolated functional zone, residents can close the wall, or open all of them to enjoy the maximum available space of the apartment. 03. Winter Garden
Facade is made of movable glass panels, which can be fully closed, opened to a certain degree or moved to the sides. By completely closing the panels, a winter garden can be created, which is especially charming during cold winters.

Cross ventilation is easily achieved when panels are opened at 45 degrees to the facade, valuable advantage for warm Munich summers. Even when open in this manner, the facade will still be working as acoustic buffer by ricocheting the noise from the road.

05. Large balcony
If needed, panels can be fully moved to the sides, thus opening a large portion of facade for loggias.

06. Variety of position
The facade is flexible enough to allow a variety of panels’ positions depending on season, weather and residents’ needs. Facade is as flexible as the apartments themselves. 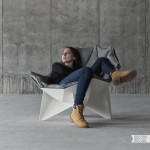 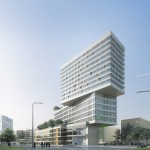