China has the world longest High Speed Rail (HSR) network that connects the entire country from north to south and from east to west. In the city of Harbin, the new West Train Station will become the northern China gateway connecting to China’s major cities with daily high-speed links to Beijing, Tianjin, Shanghai and Guangzhou. Sharing the same DNA – but positioned differently – the Twin Towers form a new icon for the Haxi Business Development Zone. The Towers creates a balanced relationship between empty and full, mass and void, private and public. Each tower creates a program specific dialogue with the site, with the north SoHo and Service Apartment tower atrium opening toward the Plaza, and the south Office Tower atrium oriented toward the Business District. In response to Harbin’s extreme climate conditions, interior multi functional green terraces are injected into the upper atrium spaces promoting a high quality and healthy working environment for the office tower, and creating comfortable and climate controlled recreational terraces for the luxury residences. The towers perform as the Digital Gate framing the city and station. The integrated media facades frame and activate the adjacent plaza promoting communication and social interaction between travellers, commuters and residents. The suspended microclimate atriums create a new typology of indoor spaces that promotes human interactions. 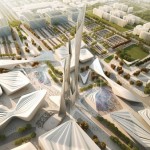 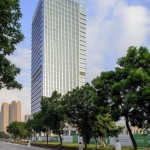