KCAP and Kraaijvanger Architects transformed the Stationspostgebouw, a former postal sorting center next to The Hague’s Hollands Spoor train station, into a sustainable and social work environment for the twenty-first century while preserving the original architecture. LIFE, SENS real estate, and PostNL, the national postal service and former occupant, commissioned the national monument’s renovation. PostNL has returned to the building, which is now its headquarters.

The Stationspostgebouw is a building with significant historical, architectural, and urban significance that was created in 1939 by Chief Government Architect G.C. Bremer. Upon completion, the 30.000 m2 structure, which is regarded as a prime example of Functionalism, was one of the Netherlands’ most cutting-edge postal sorting facilities. It is notable for having a unique pale brick façade with curving forms and glass block windows that hides deep but high floor spaces. It was intended to be the most noticeable building along the rail and has always served as a beacon for The Hague.

While Kraaijvanger Architects was in charge of the interior design on behalf of PostNL, KCAP was in charge of the architectural transformation for developers LIFE and SENS real estate. The improved daylight access that was made possible by altering the facade and adding vides is one of the transformation’s main outcomes. But significant structural alterations were not allowed due to its status as a monument. It was also difficult to repair the structure in a way that preserved its monumental character. As a result, the restoration plan concentrated on the primary load-bearing structure while preserving the integrity of the original beams and columns. Particularly considering that the Stationspostgebouw is among the first structures to use prefabricated concrete columns.

The Stationspostgebouw also needed to adhere to the strictest sustainability standards. It is the first national monument in the Netherlands to be accredited with the highest possible energy certification, “A,” after being redesigned in accordance with WELL and BREEAM standards. An almost undetectable layer of insulation is provided via a glass “second skin” inside the structure. In this manner, the building complied with the standards while maintaining its magnificent facade. Additionally, this method saves a sizeable amount of energy, reduces noise from rail and road traffic, and is backed by additional energy-saving measures. Existing materials are reused whenever possible, in keeping with the principles of the circular economy.

The building was initially well-lit because to the glass block windows and skylights. This, however, proved insufficient for a modern office setting due to the depth of the flooring. KCAP installed vides all around the building to improve the amount of daylight on the lower floors. This building’s impressive atrium, which opens up the structure and encourages people to “see and be seen,” serves as the energetic center of the new workplace. These staggered vides, which are occasionally wide and occasionally narrow, create a lively interplay between single-height and double-height floors.

This intervention also brings to mind the magnificence of the machines that formerly ruled the area. The atrium, which is encircled by tumbling floors and is crossed by bridges and staircases, can be seen as a metaphor for the sorting devices and conveyor belts that once carried mail directly from the station, according to KCAP partner Irma van Oort. These unofficial paths encourage social interaction while also allowing individuals to independently explore the area, creating a pleasant, unplanned mood.

The “Community Center” is located on the first floor and includes a lobby, café, common areas, conference rooms, and workplaces. The flexible layout of the top floors enables a variety of office concepts to be provided and set up in accordance with the requirements of various users. Future flexibility is also made possible by effective floor layouts and cutting-edge technological technologies. Irma van Oort claims that designing an office building for a new manner of working—one that makes the workplace feel like a living room—is essential to the shift.

As a response to PostNL’s demand for this new style of working, Kraaijvanger Architects focused on flexible cooperation, variable use, and employee well-being. “The glass block exterior, the deep floor spaces, and the strong structural aspects of the colossal building create an atmosphere and spatial arrangement that is singular. These characteristics, along with KCAP’s daring intervention to expose the concrete flooring, have been important in helping to map out the various internal spaces, according to Chantal Vos, associate partner at Kraaijvanger Architects.

Maintaining as much daylight as possible while separating the extremely large levels into smaller, more private quarters presented a unique difficulty. The end result is a social working environment that emphasizes connection and exchange. “Our environment has a significant impact on how we learn, work, live, think, and feel,” says Chantal Vos. Many offices are either entirely open and exposed or overly confined and isolated. The key to a good workplace is balance and creating a comfortable atmosphere. As a result, Kraaijvanger Architects gave the Stationspostgebouw the typology of a dwelling. A house is mostly made up of partially defined rooms with a variety of room sizes that are connected to one another in various ways with varying degrees of privacy.

To support the monumental palette, Kraaijvanger Architects looked for a representative architectural language. These have been used uncovered and undecorated because the materials and functional design speak for themselves. “The outcome is a potent cooperation of positive expression, a special blend in which the monument and its interior complement one another. According to Chantal Vos, they come together to create a unique visual language that is appealing to individuals of all ages.

The Stationspostgebouw is the first finished project under this concept. KCAP is also in charge of the HS Kwartier’s overarching urban vision. Irma van Oort commented, “The building becomes a part of its surroundings because of the transparent and approachable design. “In this sense, the Stationspostgebouw ensures the HS Kwartier’s human scale and serves as a crucial impetus for its vibrancy. That being the case, it is crucial for the neighborhood’s cultural fabric that PostNL return as the building’s occupant. 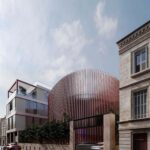 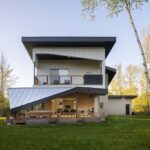