ZIKZAK Architects present their latest project in Limassol for an international IT company. The architects have developed a new expressive and futuristic facade for the building, which will become the decoration and object of attention of Limassol.

The team at ZIKZAK Architects spent more than three months working on the accent facade for the new building, which will have a surface area of more than 4400 square meters. An worldwide IT company’s office will be located in the building. Despite the project’s size and complexity, ZIKZAK Architects’ designers and architects are driven by the responsibilities marked with an asterisk.

The adjacent two-story cylindrical building and the current four-story building, which is shaped like the letter “L,” will occupy a significant portion of the courtyard and be visible from the street. The group was tasked with assembling these structures into an expressive architectural composition that piques the curiosity of onlookers and grabs their attention. After several brainstorming sessions, ZIKZAK Architects developed an original creative idea: to create a shell of large-format wooden slats that encloses a two-story cylinder and serves as the composition’s focal point. The team claims that the elaborate gleaming pavilion of Pakistan from Expo 2022 served as one of the inspirations for such a futuristic exterior design.

At ground level, the L-shaped and cylindrical buildings are connected. The lamellas that surround the cylinder take on different shapes depending on how you look at them. Wooden slats entirely encircle the structure at various angles; their bends form passageways resembling tunnels or caverns. From the side of the road, the spectator sees a striped cylinder with a regular shape, but when he turns around, he sees the building in a different, curved shape. The lamellas serve as a sun protection mechanism in addition to providing a unique and futuristic visual solution. Pergolas incorporated inside the cylinder also offer shade protection.

With programmable LED matrix covering the long ends of the rails, the emphasis cylindrical construction makes an even more dazzling effect at night. A coherent image is created from the animation that is displayed on each of the rails. A dazzling media piece that covers the full surface of the cylindrical shell is visible from a distance at dusk.

A lot of panoramic windows are available in the building. There had to be a way to guard against the sweltering sun given Cyprus’ torrid environment. Automatic Japanese curtains were installed for each of the windows in order to keep the space from heating up and to make it comfortable to remain in and work in. The established scenario is followed as they go around the perimeter. Japanese blinds have emerged as one of the unconventional options used by designers to enhance the beauty of the building front, although roller shutters are still primarily employed in offices.

The project offers straightforward and beneficial phytodesign. For aesthetics and freshness, thoughtful rhythms of plant compositions are planted on the building’s balcony and patio. The fence that is next to the road is surrounded by lush flora that visually and naturally divides the area while serving as a barrier between the yard and the dirt from the road. 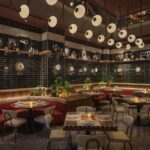 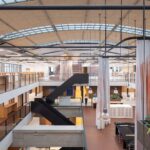