The Museum of Tolerance is located at the heart of modern Jerusalem, in its rejuvenated city center, on the borderline between the spacious Independence Park, and the urban built environment. It is designed as an elongated  structure which traces the southern and eastern borderline of the site. The structure orchestrates the three surrounding streets into a coherent urban space. The building is divided into two horizontal wings: a three floor floating upper wing which hosts the theater and social meeting spaces, and two sunken floors which hosts the museum's exhibition spaces. The entrance floor is located at the level of the public square and hosts a restaurant and gift shop. It is leading up to the floating wing or down to the sunken one. Part of the floating wing is suspended over ground level, creating a gap, a doorway, from the built city to the park. 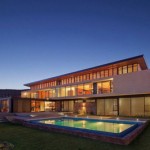 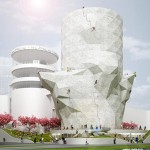