The 1963, steel-framed, brick-infill building was originally built as a speculative office building. Despite housing a set of dreary, dark offices and needing a lot of work, Clayton Korte jumped at the chance to acquire it, recognizing the untapped potential of the raw spaces. The 10,000-square-foot, two-story structure is set into the hillside abutting one of Austin’s principle thoroughfares. The property slopes the equivalent of one floor from front to back. Unstable soils meant the first order of business was stabilizing the structure. Sixty-five structural piers were drilled to prevent the building from eventually sliding toward Shoal Creek in Pease Park, which sits directly across N. Lamar Boulevard. Rooftop parking for fifteen cars supplements the thirty street level spaces.

Following stabilization, the interior was gutted, leaving an empty shell into which a minimal set of spaces was introduced. The existing, small perimeter windows were enlarged—doubled in size—to bring more light into the building and to feature treetop views of the adjacent Pease Park. Perimeter interior walls were cleaned, clad in homesite, and topped with industrial felt, transforming virtually every wall into pin-up space to encourage collaborative design exchanges. The few private offices that exist are pulled to the corners, ensuring an open, free-flowing floor plan with ample space between workstations. Low-scale office furniture reinforces the sense of openness.

The former utilitarian stair connecting the first and second floors was removed. The remaining opening was widened to accommodate a dramatic, wood-wrapped stairway featuring a steel stringer with exposed weld joints and post oak treads. The oil-finished post oak, harvested following a severe drought in 2011, also wraps the stairway. The central open stair anchors the large, light-filled studios on both floors.

Ceilings and floors remain raw, exposed white ceiling insulation and polished concrete, respectively. Simple, semi-sheer curtains were installed to modulate the bright Texas sun through the now larger windows. Plate steel baseboards continue the minimalist aesthetic while providing durability. Custom steel windows and interior doors were fabricated in-house. Kitchen and support areas are shared by all tenants. A new, glass-and-steel facade replaces the inefficient cladding of the pop-out element above the entry on the front of the building. The exterior brick is lime-washed, a simple durable finish traditionally used in the area. 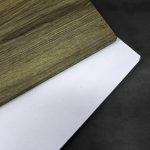