Dietmar Feichtinger Architectes  have recently completed their project – Aldilonda in Bastia. The promenade follows the rocky coastline five meters above sea level and offers new perspectives on the open sea. Take a look at the complete story after the jump.

From the architects: In Bastia, Corsica’s second largest city on the north-east coast, Dietmar Feichtinger Architectes achieved the promenade Aldilonda, which means “Above the Sea” in Corsican with local architects Buzzo Spinelli, Insitu landscape and the engineers of Sbp France.

Anchored in the rock, Aldilonda follows the rocky coastline five meters above sea level. The rock forms the massive natural foundation of the mighty enclosing wall of Bastia’s fortress, which gave the city its name. Until now, the rocky coast beneath the fortress wall was only partially accessible.

More than a path, a destination with new perspectives on the open sea, suspended between sea and sky, Aldilonda becomes a spectacular event. A softly curved path contrasts the massive fortress and the rock on which the bastion is founded. The path nestles against the rock, leans against it, breaks through it, widens out and offers places to linger. Sensitively, the construction blends into the rock, the rich natural space of the coast is carefully traversed. At the same time, the red band of the railing made of Corten steel offers a high sense of security above the surf. The bars offer maximum transparency, the iron-bearing rock harmonizes with the rusty red of the railing.

The sea can be experienced through the area covered with a transparent grid. The balcony is exposed to the surf; when the waves are high, the water passes through the stainless-steel grating on the rock, reducing the massive force of the water. Hydraulic tests in a basin in La Seyne sur Mer were necessary to determine the force of the wave impact at 14 tons per square meter.

The acrobatic use of workers, suspended from the platform of the fort on the trapeze, made it possible to anchor the structure in the rock. Drilling jigs had to be designed to anchor the 25-metre-long tension cables. 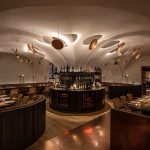 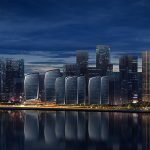