The family desired a modern home that would increase their connectivity with nature, both inside and outwardly, while also serving as a calm retreat for family members to reconnect with each other and enjoy lonely moments.

The architects sought a sensitive technique for drawing nature within the house throughout the concept’s early development, while the owner cherished intense childhood recollections of growing up in an orchard environment. The apple tree represented his first encounters with nature as a child, as well as the continuation of that connection years later while gathering apples with his own children, as part of an enduring tradition of meaningful family time spent in nature’s embrace. The apple tree was immediately incorporated into their collaborative concept, becoming the project’s focal point.

“The nostalgia of the orchard setting provoked a sincere and pure emotion, and we immediately knew that we had to incorporate an apple tree at the heart of the project in order to sow the seeds of the family’s future history. It became a central pillar for connecting the architecture, the house, and the family.”

The inclusion of the apple tree provided the residents with a much-needed connection to nature, which was expressed through close interactions with the many daily moods, cyclical seasons, and the corresponding weather patterns. The parents and kids both re-learned how to take care of an apple tree by watching it develop, pruning its branches, treating any dangerous diseases early on, and enjoying the tree’s beautiful blossoms and fruit production. Because of this connection, the area around the house is transformed into much more than just a sight of inert beauty. It has integrated itself into daily life for the family and raises awareness of the vulnerability and significance of nature on the globe.

In order to integrate the apple tree in a manner that addressed the family’s desire to blur the lines between the interior of the house and its external natural beauty, ACDF focused on transparency and openness as the foundations of the obvious choice for the architectural concept: A modernist and minimalist glass house.

Between the horizontal planes of the glass box, three individual wooden boxes were inserted, each with a small protrusion and each with a specific function.

The home’s garage and service area are located in one box, and the children’s bedrooms and bathroom are located in the second box. The master suite, which consists of a bedroom, a separate living area, and a bathroom, is framed by the third box. Despite maintaining visible linkages to both the exterior natural setting and the interior spaces of the house across an open central courtyard that is home to the apple tree, each of the individual boxes offers a pleasant, private retreat from the communal mood of the home’s main living room.

“The home is designed for connectivity, and glances in every direction provide views across openings to other spaces.That being said, the boxes were designed to respect the need for privacy, and their wall placements are intentional in their offerings of solitude.”

The use of many layers of composition that transition from the exterior to the interior allows for connections with the outdoors. Large, almost institutional-looking concrete blocks establish a clear route of steps leading up to the main door as one approaches the house laterally, next to the box containing the garage. The same experience entry point within the house should be reached by both the front door and the garage, according to the team that designed both entries.

The house was carefully positioned to maximize sun patterns in all seasons, and openings that connect the spaces make sure that sunshine is present all day. The presence of plenty of sunlight throughout the winter also aids in warming the concrete flooring and reducing heat loss. 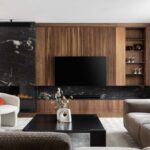 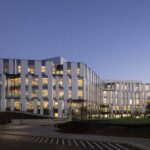