jalowski kohn kselrad architects recently completed their latest project, the  transformation of an old house in a suburban neighborhood of the city of Córdoba. Take a look at the complete story after the jump.

From the architects: It is a reform and extension of a house located in one of the traditional neighborhoods, which surround the central area of ​​the city of Córdoba, Argentina. The objective of the order was to solve the overcrowding problem, aggravated by the pandemic, of the house occupied by a married couple with two children. An internal house which is entered through a gate, which is its only direct contact with the street. The “L” shaped terrain has a depth of almost 30 meters, but in its first 20 meters it is only 3 meters wide. The original house was dark and without visual relations with the street. It consisted on the ground floor with a small room at the entrance, which was accessed after crossing the garage and a light patio. An internal dining room, an old laundry kitchen, two bedrooms and a single bathroom completed the main level. Upstairs a room served as a study and was the exit to the terrace, much used by the family; but whose appropriation was limited by two broken slabs, a larger one and a smaller one that served to illuminate and ventilate the dining room and bathroom, on the ground floor.

In addition to being able to solve functional problems, the design premise was to generate, with the intervention, a spatial journey with new perspectives, despite the limitations of the terrain.

On the ground floor, a double height entrance was generated, which functions as an internal facade. Which is accessed by crossing the small courtyard, after crossing the low and deep entrance-garage, which generates the sensation of a tube. It should be clarified that one of the client’s requirements was that from the street the facade would continue to go unnoticed and read only as a gate. The last part of the garage that previously had a roof and sheet metal openings was freed up and replaced by a hail-free pergola, in order to reinforce the perspectives towards the internal façade.

The double height entrance is accompanied by a sculptural metal staircase that leads to a new main study on the ground floor with access to the terrace and overlooking the street, this visual relationship with the outside begins to develop as one climbs the staircase.

The wall that separated the dining room from the secondary bedroom collapsed, in order to generate a living-dining room with access to the back patio, and the entry of overhead light from the dining room was preserved, which visually connects it with the terrace. In the back patio, a grill was added and all the openings in the rooms that surround them were enlarged, giving it a new role. The master bedroom was kept in its original location but it was enlarged by removing the closet and was completed with an important set of dressing room, restroom and bathroom.

A guest toilet was also added on the ground floor, in a space that was previously unused, and the kitchen was completely renovated, generating in turn a separate laundry room. It was possible to lower the level of the interior floor of the ground floor in order to achieve higher spaces.

Upon the arrival of the original staircase, on the upper floor, which previously functioned as a dark passage, the masonry railings that surrounded it were eliminated. All openings were enlarged and new openings were generated to the adjoining space. This, added to the fact that the floor level was lowered 15 cm, allowed to generate a new space that can serve as a secondary study. In the space that previously functioned as a study, a new bathroom and a dressing room were located for one of the new bedrooms. Two bedrooms were built for the couple’s children using steel frame technology, with the particularity that one of them, being located on the broken slab of the dining room, functions as a small loft.

The broken slab that originally served to illuminate the ground floor bathroom was replaced by a horizontal slab with a small skylight that illuminates the ground floor dressing room. In this way there is a more regular terrace that overlooks the back patio and which is accessed from one of the bedrooms and from the new main study.

The location of the terrace and the rear patio facing north and northeast allows the environments to have natural lighting all day. 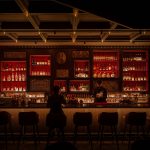 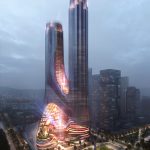