Luciano Kruk Arquitectos designed this modern concrete residence located in Pinamar, Argentina,in 2015. Take a look at the complete story after the jump. Costa Esmeralda is located thirteen kilometers north off the city of Pinamar and four hours away from Buenos Aires. Barrio Marítimo II, where the plot of land is located, is set parallel to the sea. A screen of pines lies between the neighborhood and the seacoast, thus respecting the 200 meter setback required by provincial regulations.
Lines of maritime pines occupied the lot, an almost virgin sand dune. Regarding the terrain’s topography, while there is a two meters slope from side to side, it descends longitudinally in a soft slant toward the sea.
Two were the reasons for choosing the materiality. On the one side, having built other houses in exposed concrete, we knew this material stays in good conditions for a long time practically with no maintenance. On the other, we thought its color and texture would establish a harmonious dialogue with the place’s natural surroundings.
Widespread, bright and intimately related to the outside, the social area should be the most important part of the house; the private area should comprise four bedrooms, as independent from one another as possible, each of them with its own bathroom. We aimed at developing most of the plan in a single level and at having a greater outdoor area in a higher level, where water should be present and where we could contemplate the striking natural environment from. We agreed that the trees and the terrain’s particular topography were jewels the architectural project should respect.
We wanted the house to lie amid the woods, surrounded by the place’s immanent atmosphere. That is why we decided to set the house back into the lot more than the minimum distances required by regulations. While setting the house back away from the street would give more privacy to the interior, the rear would not suffer any harm due to the fact that it expands visually beyond the limits of the terrain and merges into the pine woods next to the sea.
Aiming at producing some contrast for the senses, to enter the house one must go from a gloomy semi covered space, through a narrow staircase enclosed by blind exposed concrete walls and, finally, into an open bright area: the main floor.
Regarding the main floor’s design, in order to give every room as much privacy as possible, each one was located in a corner of this quadrangular floorplan. The central hall would house the social activities. Helping to organize this area, a stairway going up to the rooftop lies at the heart of the floorplan and gives order to the space as it separates the kitchen and dining area on one side, and the living room on the other.
The bedrooms’ –and their bathrooms’– equipment was detached from the house’s outline, thus freeing its supporting walls.
On the topographically highest side, where the main floor’s platform stands on the natural ground, the side wall was reduced to a hanging partition opening the interior to the outside through a longitudinal lower crack that protects the inner space from the looks of the neighboring lot. On the lowest side, in which the house hangs two meters above the natural terrain, a low wall with a high longitudinal opening constituted the outline. Both solutions allowed for outdoor visuals and spaces full of natural light, without losing the inside’s privacy.
While the sides were closed by blind walls with horizontal cracks, both the front and the rear were enclosed by a transparent barrier occupying the box’s whole width and height that directs the views and frames the visuals. On the rear, the opening framings help the inside expand into the semi covered deck and merge into the outdoor space.
The concrete’s own malleability allowed the stairs to be conceived as an autonomous sculptural element. The walls that separate the bedrooms from the central area were treated with the same expressive plasticity, thus generating niches and protruding volumes that function as fixed furniture.
With regards to the house’s illumination and given the floorplan’s depth, it was decided that the natural lighting would be reinforced from the rooftop. The crystal box containing the stairs bathes the social area’s center in sunlight. Linear cracks were incorporated into the inner partitions that limit the kitchen-dining sector in search of different natural light effects throughout the day on their surface. Also, the bathrooms were illuminated by means of skylights placed over the showers.
A big slab sustained by an inverted beams system, supported by partitions inside the floorplan, and metal columns disposed on the side limits as parts of the aluminum framings compose the supporting structure. In order to emphasize the house’s horizontality and to diminish the beams structural system’s visual impact, it was set back from the exterior enclosures, thus generating cantilevers that function as brise-soleils.
Embraced by the pines’ canopies, a peaceful contemplation space unfolds on the rooftop. Due to the transparency of the box containing the stairs, views in all directions can be experienced. Covered by a wooden deck and furnished by a shower area and two adjacent swimming pools, this viewing space is enriched by the sight of the sea.
We built a box amid a slice of nature and, by letting the exterior flow in and out through it, we made it a constituent part of its environment. Thus, the box and its surroundings merge and vibrate in consonant harmony. Through its spatial synthesis and the simple character of its materiality, we intended the house to wake its inhabitants’ perceptions and to maximize their senses, as in the mystic reciprocity the often appears between people and things. 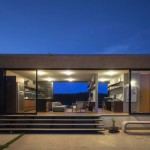 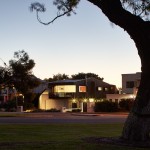