Project: Climath
Designed by Biothing
Principal Designer: Alisa Andrasek
Design Team: Jose Sanchez, Anastasia Lianou, Igor Pantic, Ermis Chalvatzis, Karoly Markos
Location: Dubrovnik, Croatia
Website: www.biothing.org
Climath project coming from competition held in 2011 is work of Biothing, it is designed for a location in the historic town of Dubrovnik. Architects were challenged with designing a contemporary structure ready to blend in with town's ancient architecture which is part of world heritage. At the same time the building solution had to follow standards of green architecture, the whole project also successfully reflects on surrounding urban planning. Synthetic Ecology. The project is binding ingredients of local culture and physics in order to developed hybridized programming through higher resolution fabric of architecture.
Inspired by the Old City’s network of polished stone pavements, squares, palace courtyards and cloister gardens, the project attempts to replicate qualities and effects of such collective “living” space. Proposal introduces high-resolution micro-articulation of urban furniture, synthetic “weather” and dispersed energy production.
Mathematics in Stone. Tilling pattern of the plaza is generated by the 5 colored Cellular Automata algorithm based on computing local neighbourhoods resulting in highly heterogeneous distribution of infrastructural cells. It provides for probabilistic distribution and controllable densities for the populations of lighting, benches, planters and other elements.
High Resolution Infrastructure Programming. Seating elements are imprinted in its surface. Swarming patterns of light are reflected in the white stone allowing it to glow at different intensities during the night, reprogrammable to various scale of use and events as well as formation of atmosphere. For centuries, Onofrio’s well acted as an attractor for people looking for refreshment during the hot sunny afternoons. Top layer of the plaza contains water-misting cooling fields as a form of synthetic weather. Dispersed field of planters is seeded for aromatic local herbs inspired by the lavender fields of Hvar and terraced vineyards of Korcula. The proposal speculates using plaza’s natural exposure to the abundance of sun hours Dubrovnik receives, in order to absorb solar energy through distributed arrays embedded into the pavement.
Inclined. In its orientation shredded tectonic plateau gently inclines towards the Old City walls providing massive clearance, the erasure of visual content in front of the dominant iconography of the Walls. Inclinations of the plaza are mathematically analyzed in order to provide diversified yet consistent viewing platforms for the spectacular sights.
Agent Based Vertical Residences. Residential sequence is again looking at the elements of local physics and culture of Mediterranean living, programming architectural fabric to reach for the sun and Old City views through elongated frontal terraces and double height windows. The luxurious quality of apartments is achieved through vertical extensions, quality of light and connectivity with abundance of exterior spaces, rather than sprawling of excessive sqm that often provide low quality of space in spite of the extensive planometric coverage. Due to its unique position, most apartment are structured as duplexes stressing vertical dimension and very tall windows overlooking the Walls. Shredded architectural fabric creates complex sectional conditions, opening interstitial patio spaces, skylights and network of roof terraces throughout _ reaching deep into all floors.
Compact. Project packs traffic circuitry and high volume parking with maximum efficiency freeing the site for generous public and residential use by inserting double layered public space oriented towards revitalization of social and cultural ingredients Dubrovnik has a long tradition of _ tradition rapidly vanishing under the pressures of global tourism. With a desire to make an impact on local community and release the pressures formed by vertiginous flux of tourism, project introduces double layered public plaza. Free-flowing topology of pedestrian-accesible zones is laid upon foundation of hyper rationalized and compact infrastructural base.
Porosity. Lower plaza is bind to the upper one through a highly porous skin/structure piercing dense field of ceiling apertures and bringing light and complex shading. Porosity is achieved by ruptures in the upper plaza/roof in the form of highly articulated “canyons” bringing light and visual connection in. Canyons are opening micro-plazas at the lower level creating deep shadows and visual connections. Program is highly hybridized oriented dominantly toward content that would support lifestyle of local community and by extension higher level tourism. Light conditions vary significantly in lower plaza and programs can be organized relative to differentiated light conditioning. Some programs proposed around “canyon” light wells are green market, restaurants and cafes and offices, while darker areas support more commercial programming such as shopping and cinema/amphitheater. 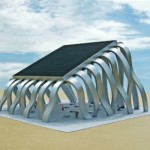