Vives St-Laurent recently completed their latest remodelling  project in Outremont, Canada – Querbes Residence. The design emphasizes the timeless character of the residence built at the turn of the 20th century. Take a look at the complete story after the jump.

From the architects: Located in Outremont, the Querbes Residence consists of the complete remodeling of a single family house built at the turn of the 20th century. From the first visit to the premises, the residence’s unique features became an integral part of the project’s conceptual direction. In fact, architectural elements such as the staircase, the plaster moldings, and the fireplace’s mantle needed to be preserved and brought forward.

The kitchen, previously partitioned, now opens on to the dining room, as well as to other living spaces on the ground floor. One of the major interventions is the relocation of the basement’s access. In harmony with the staircase’s classic style, the new access now integrates into the original structure.

Clear and simple, the kitchen becomes the key element of the open space concept. The use of gray hues enhances the stone’s natural texture. The marriage between the lacquer and the marble counter creates an ambiance with sober tones. The stone-covered peninsula gives the impression of a ribbon wrapping the cabinets, creating the effect of blocking the entrance’s point of view.

The dark-colored, American walnut floor was restored to its original state in order to contrast with customized white oak furniture pieces. The incorporation of a large bookshelf in the dining room serves both as a credenza and as additional storage for the open space. Furthermore, the addition of a bench in the vestibule can be used as a seat, as well as a functional storage space for the family.

The restoration of the back facade, as well as the remodeling of the basement, was realized in collaboration with Pelletier De Fontenay’s architectural firm. The addition of a large sliding door, and the enlargement of the window above the sink, enhance the visual connection towards the yard. The red brick siding and the anodized finish of the new windows really emphasize the timeless character of the residence.

The completely revamped basement offers additional living spaces to the residents, including a living room, an office space, a bedroom, and a full bathroom.

At the crossroads of contemporary and classic styles, the new interior design channels an ambiance that is both chic and family-friendly. 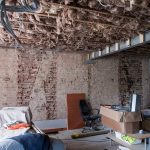 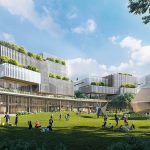