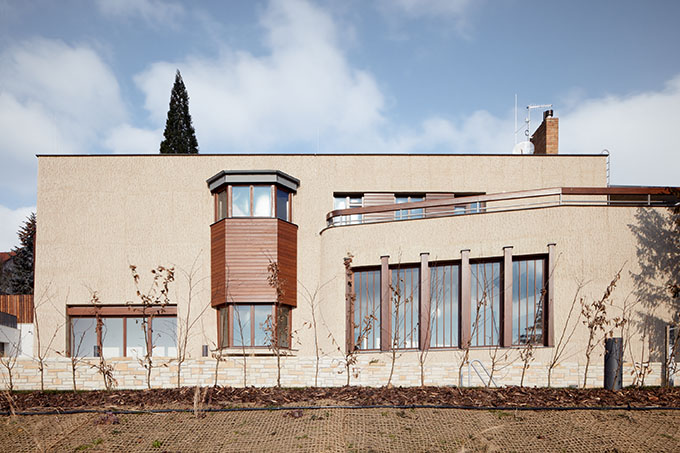 Studio Idhea renovated a 1936 Villa by Vladimír Grégr called The Indian Ship. Inspired by the haciendas and villas of Californian movie stars, this villa is a good example of the aerodynamic functionalism with its distinctive conical external walls and wood siding. 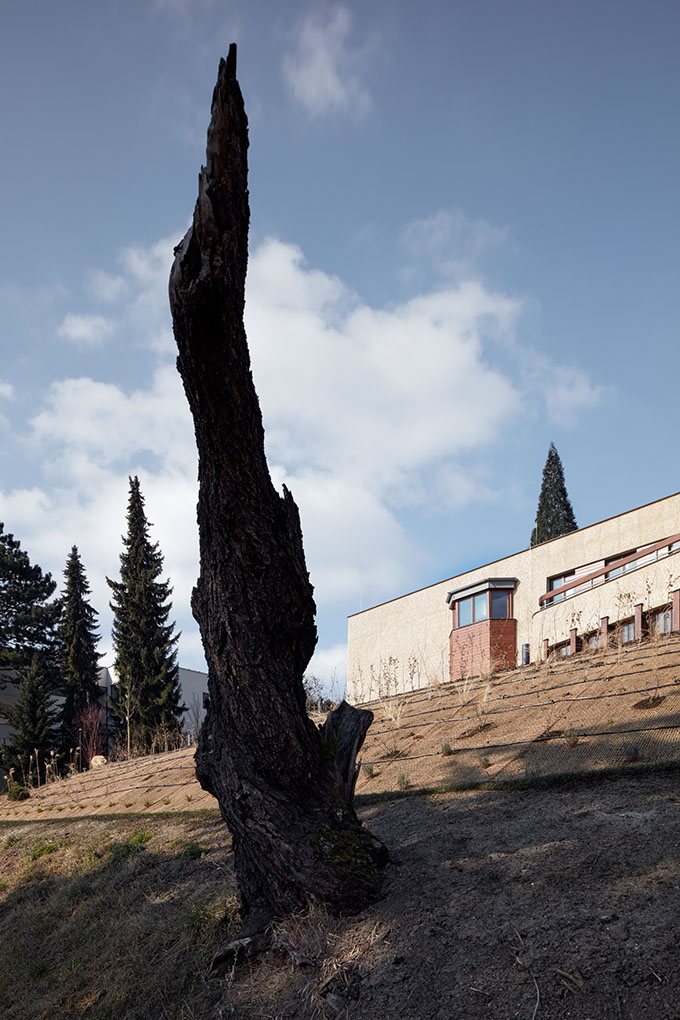 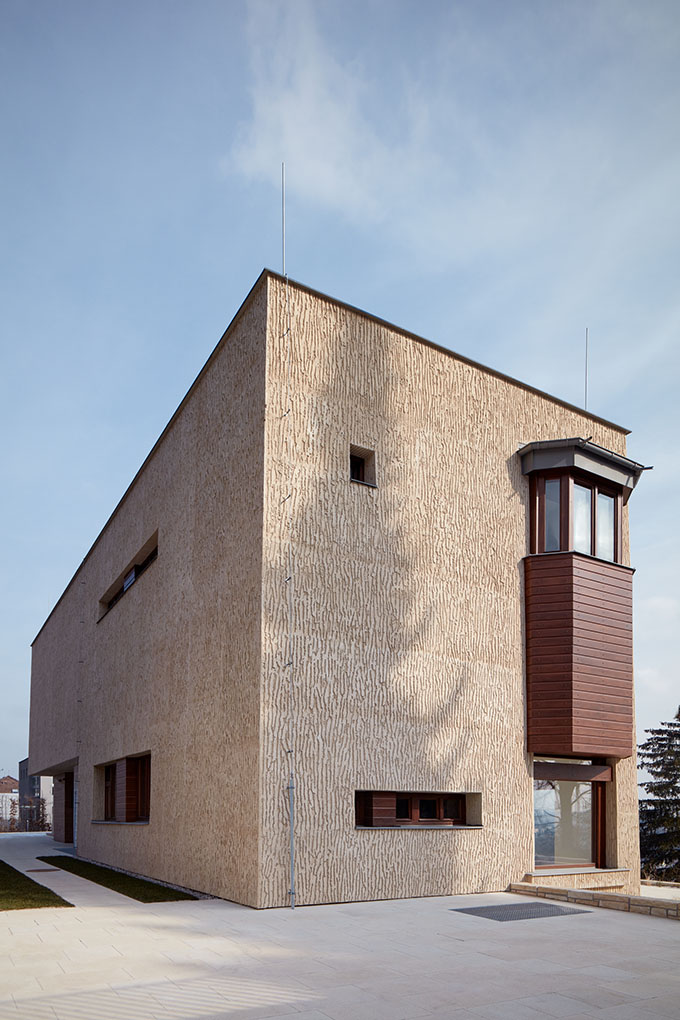 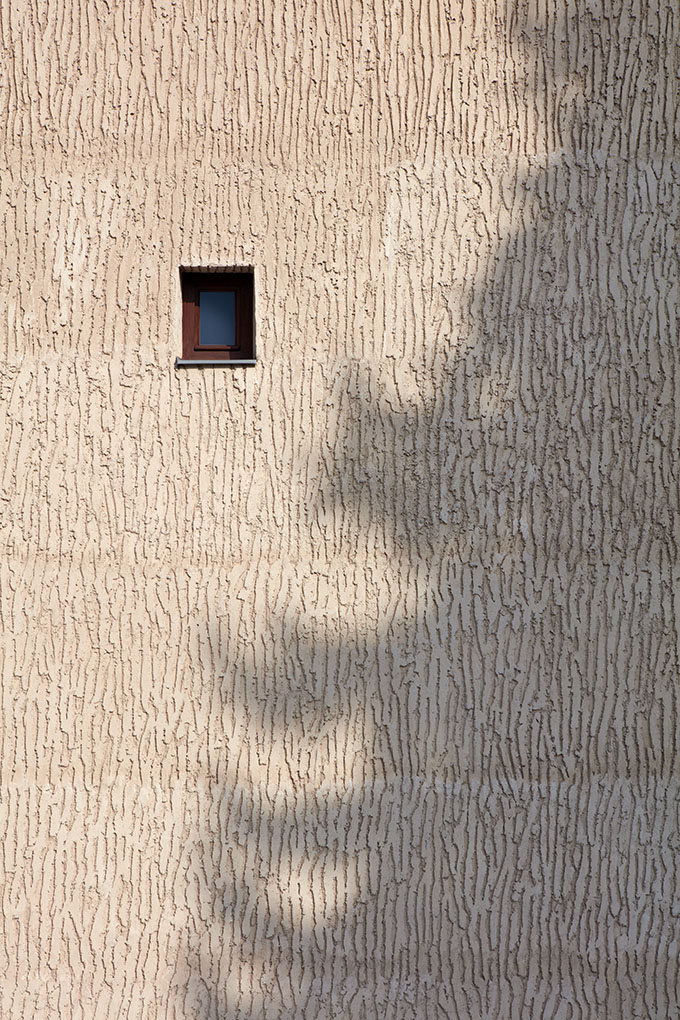 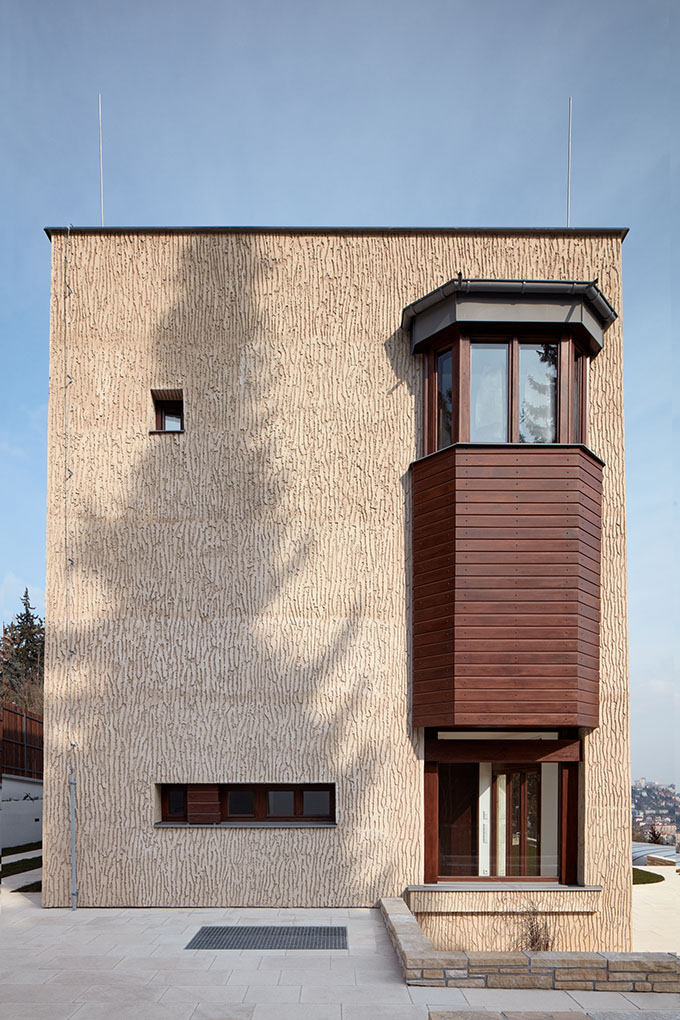 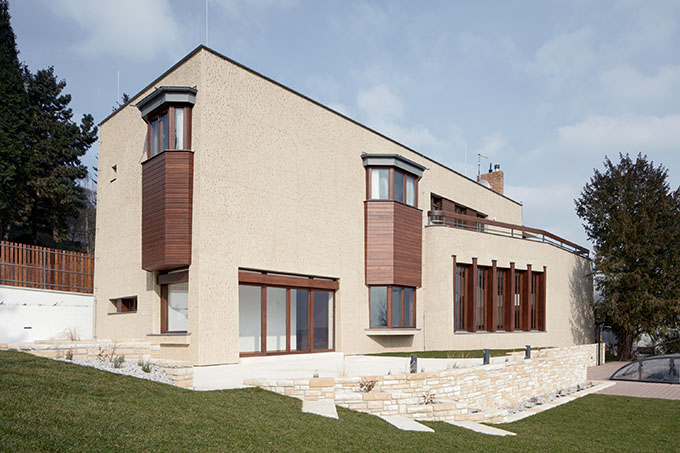 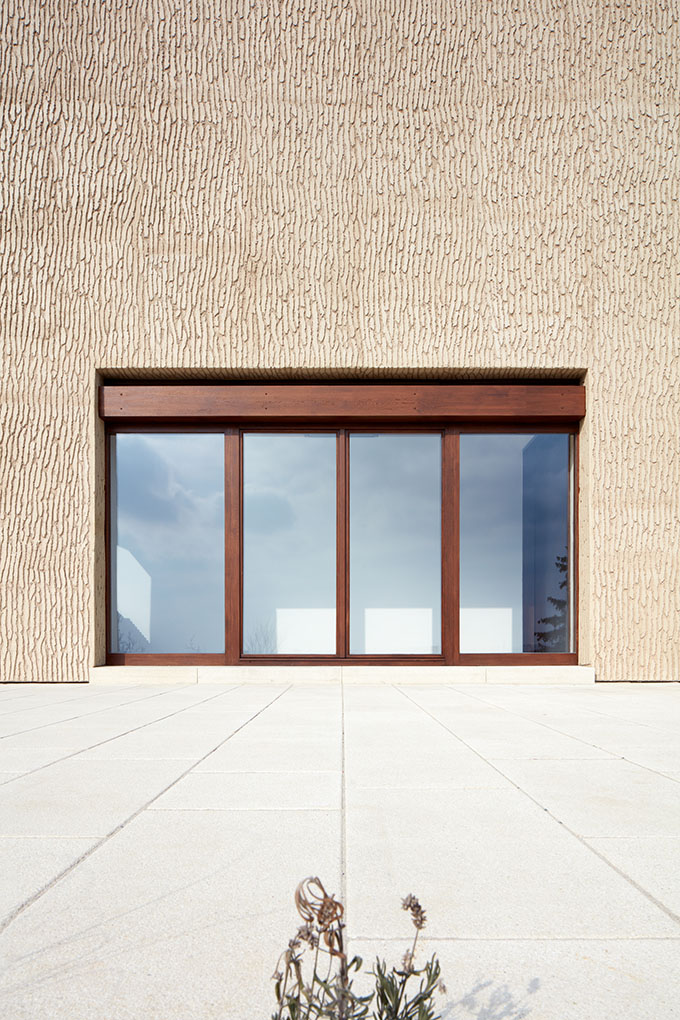 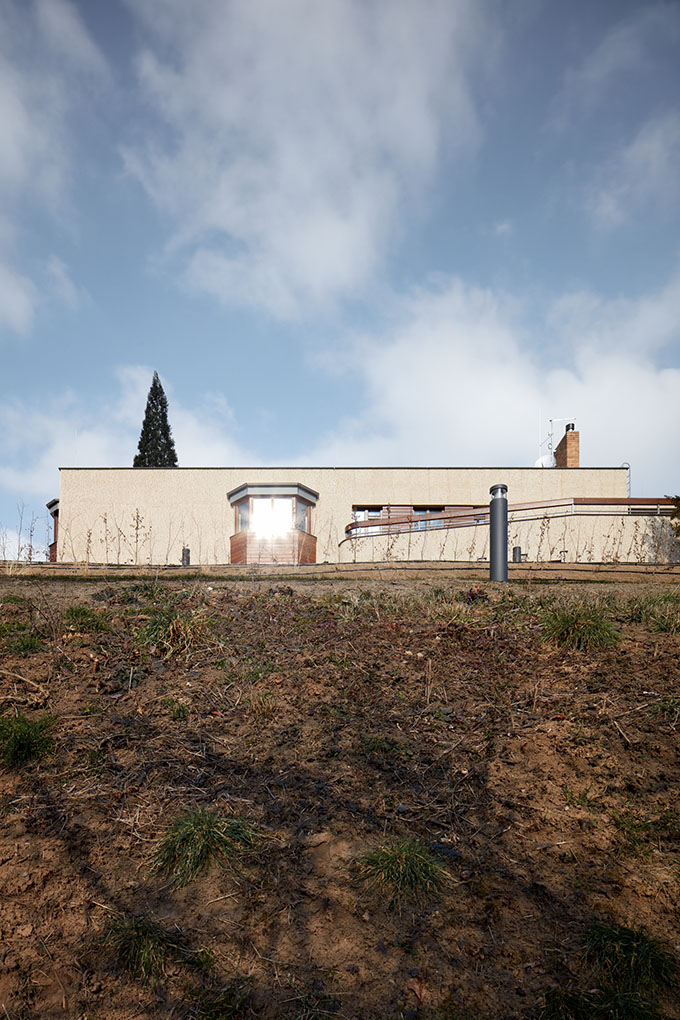 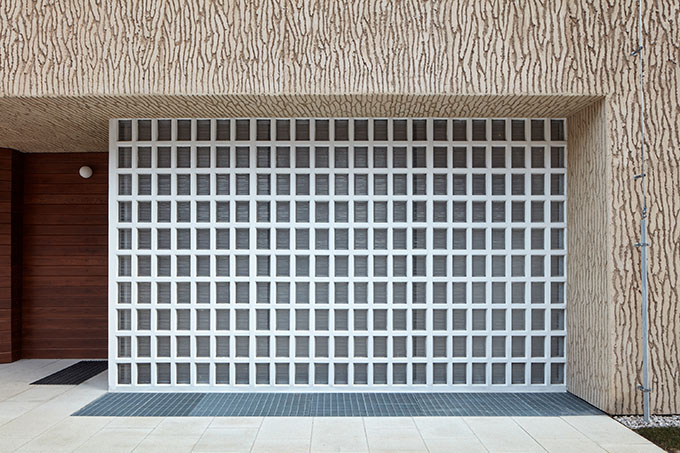 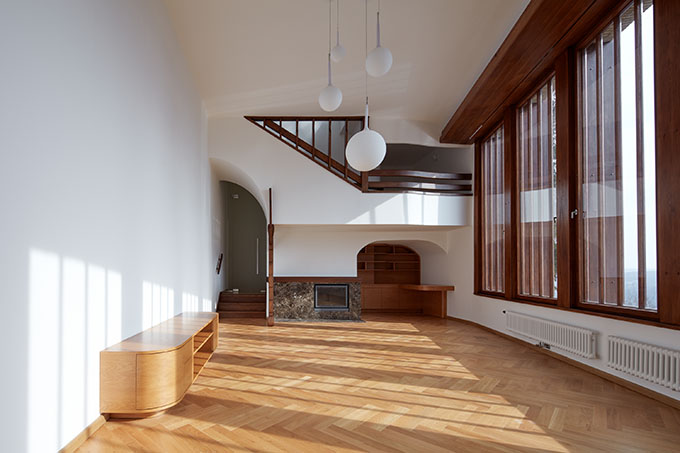 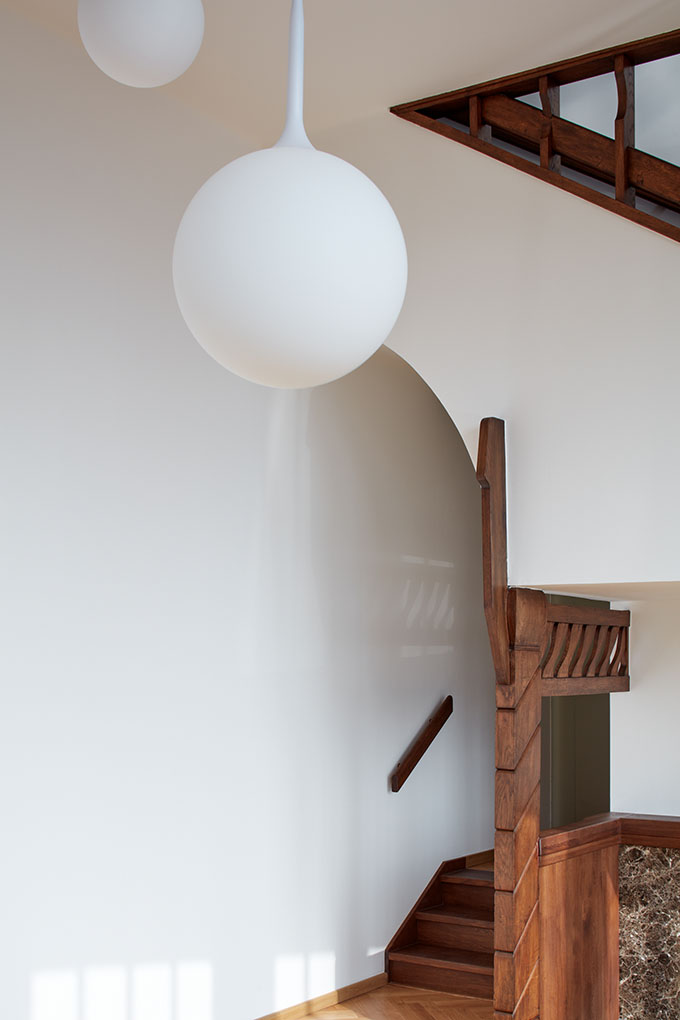 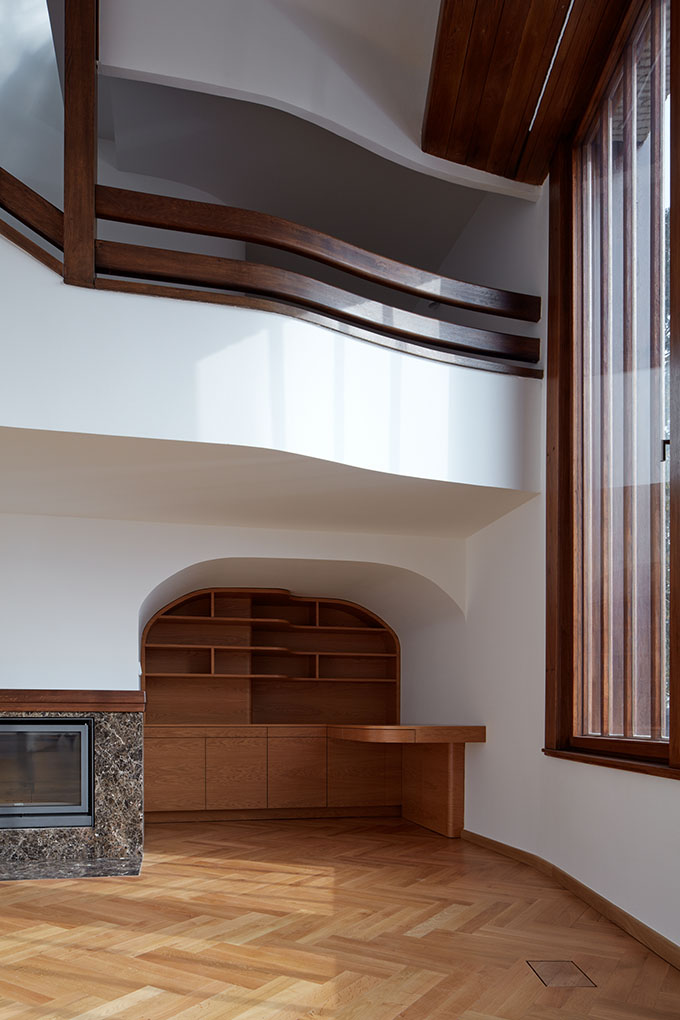 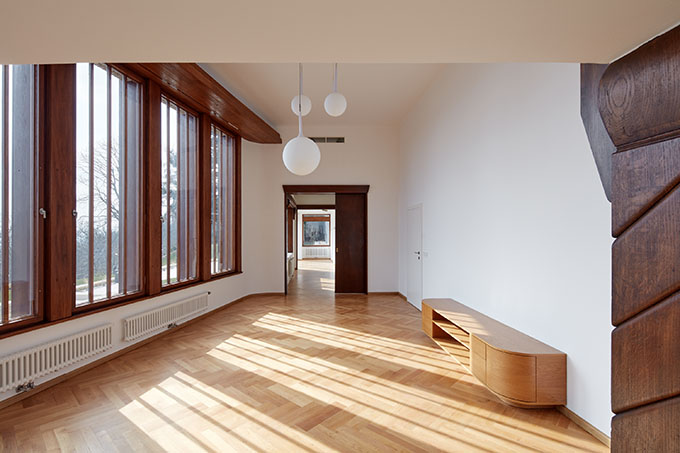 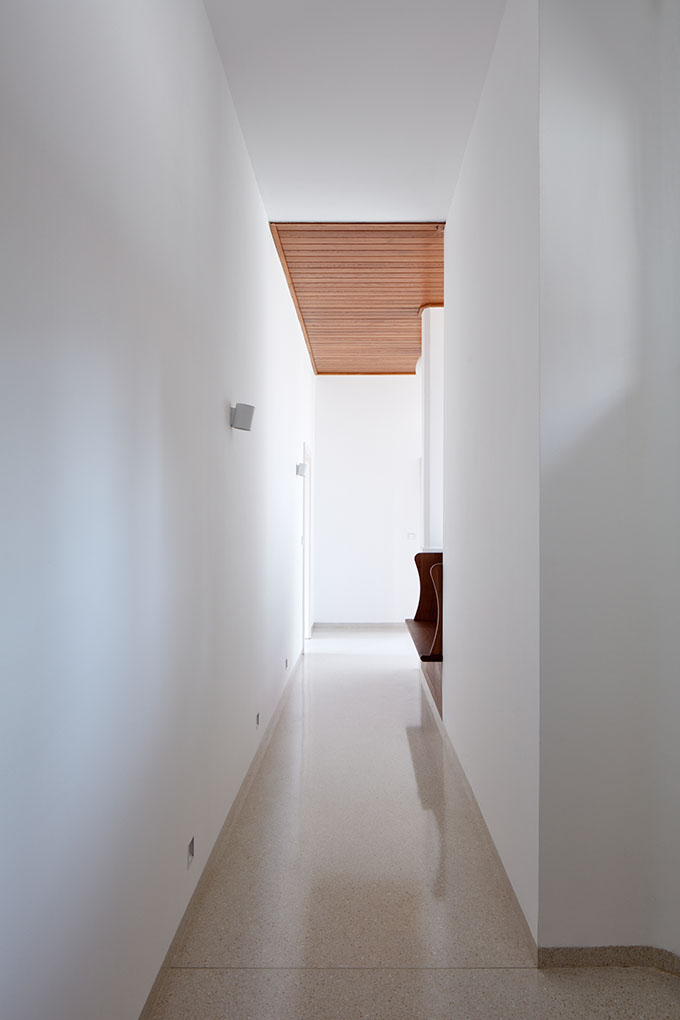 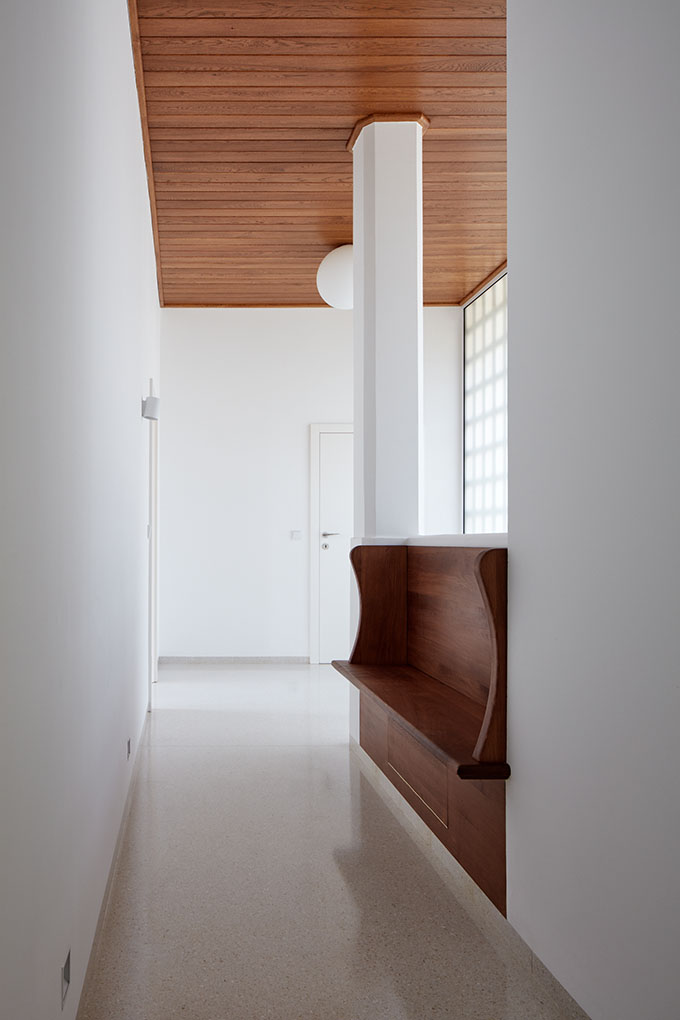 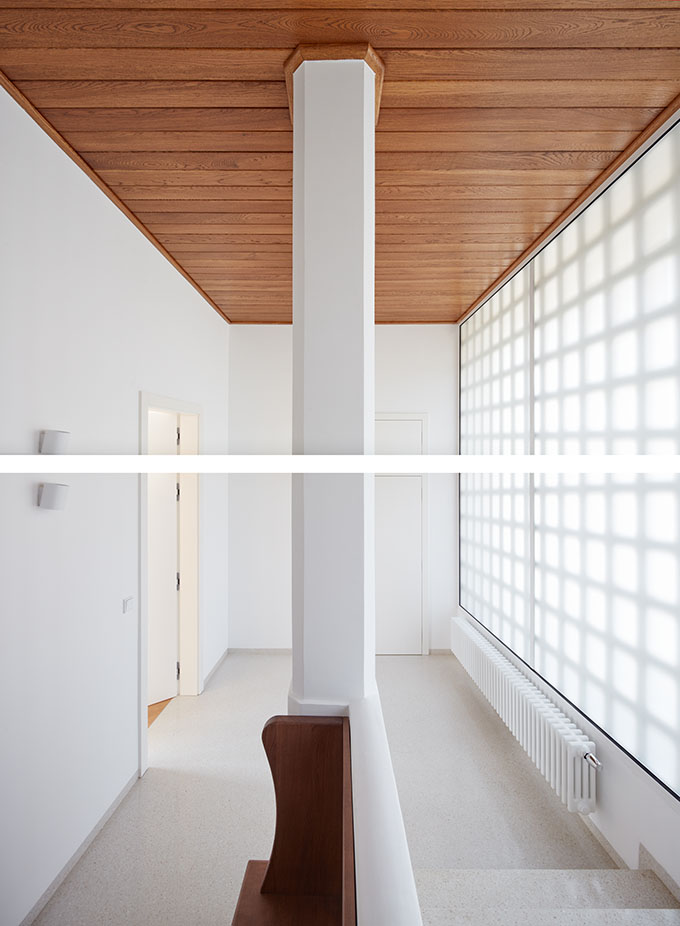 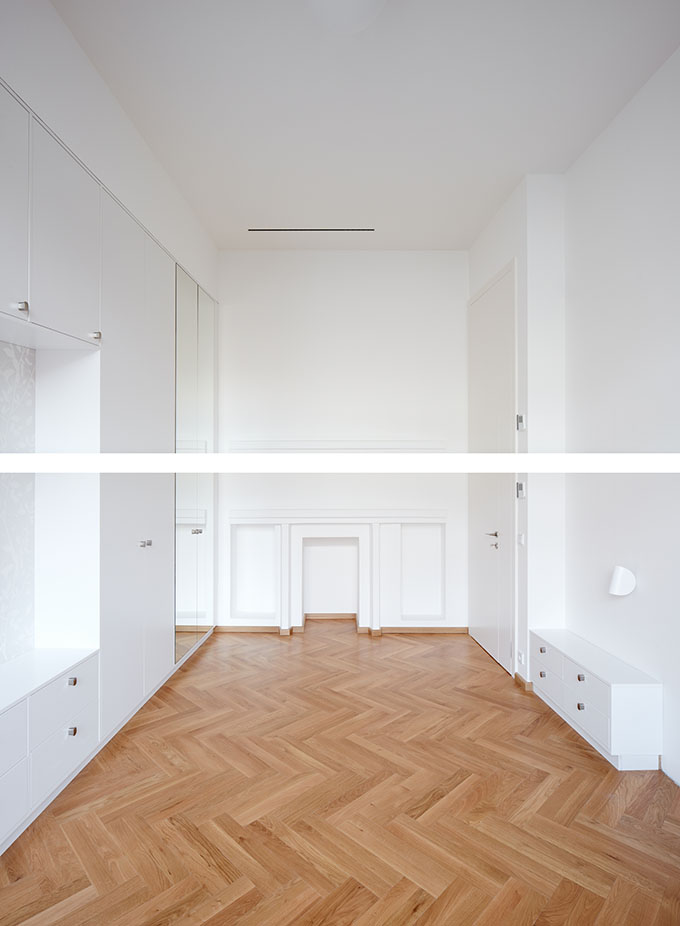 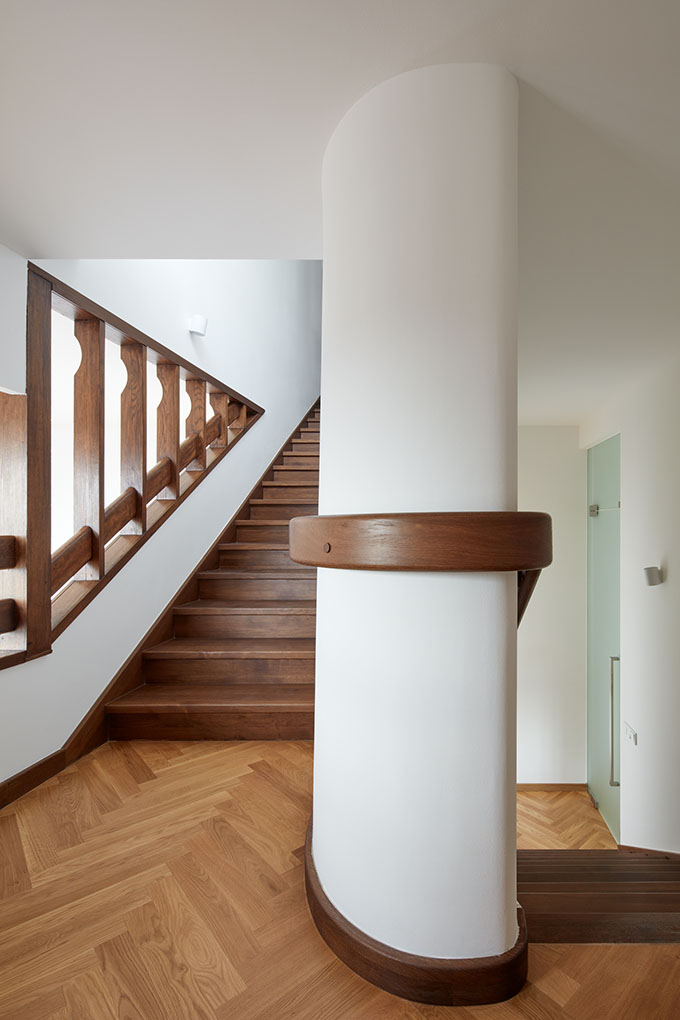 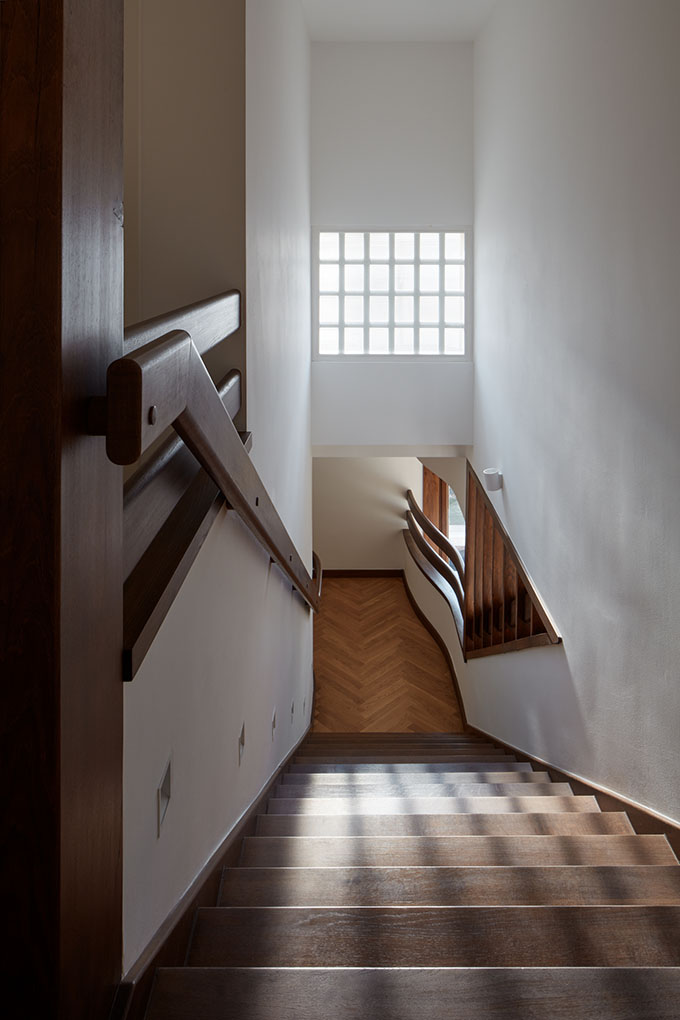 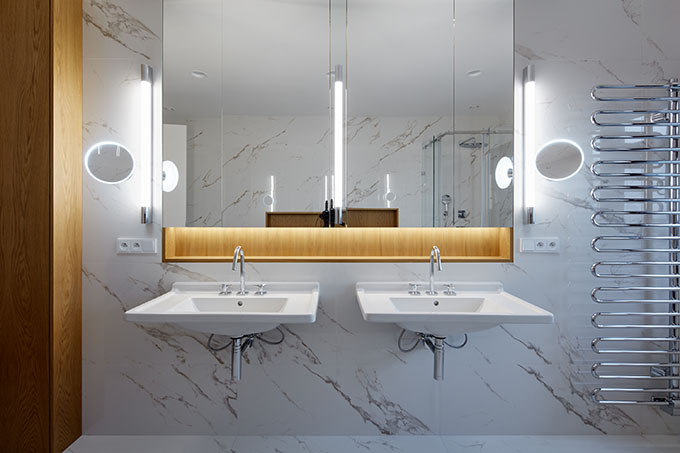 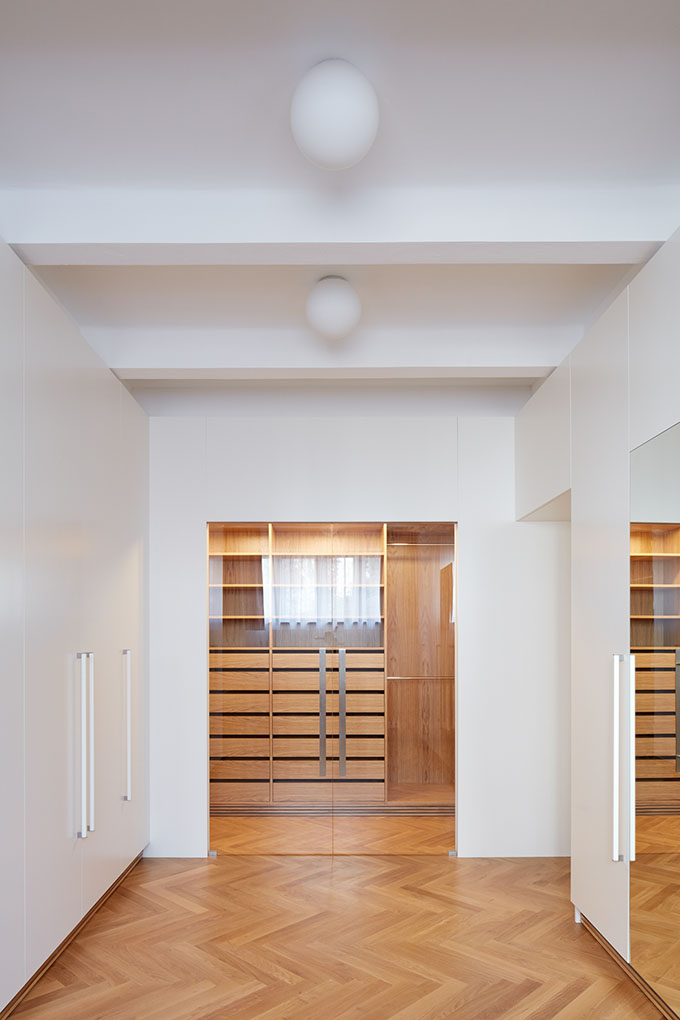 From the architects: The villa was built in 1936 according to the design of a noted Czech architect Vladimír Grégr, grandson of a well-known journalist and politician. Built in functionalist style, the villa has significant rustic elements including conical exterior walls, rough dragged work and wooden casing. In the framework of maximum respect to the original character of the house, the modifications include removal of the accumulation of insensitive silt of the 80s, highlighting the unique spaces and architectural details, and adaptation to modern living standards.

Vladimír Grégr’s work has been strongly influenced by his stay in the United States and the inspiration from the romantic haciendas of the Californian movie stars. Based on this experience he started designing aerodynamic functionalist houses. He also started developing a rather romantic shape morphology inspired not only by the mentioned Neo-Spanish style, but also by Jan Kotěra. The first opportunity to use his new approach was at Barrandov in Prague, where the Barrandov Film Studios and a sightseeing restaurant were built at the impulse of Havel brothers. The builder and developer Mr. Havel wished for the studios to be complemented by luxury residences built along the narrow Barrandov streets. He approached several architects, among them Vladimír Grégr, who gradually built seven villas in the location. Most likely it was Grégr’s style, that most corresponded both with the romantic surroundings and the taste of the Czech film stars, who wanted to live like their famous Hollywood counterparts. We had the opportunity to participate in the renovation of one of these villas nicknamed Indian Ship.

The Indian Ship used to belong to diplomat Růžička. It is a carefully composed lengthwise shell placed onto the south-east Barrandov slope, parallel to the Barrandovská Street. The interior layout is strongly oriented towards the garden, all the residential rooms – the super-elevated living room, dining room and library on the ground floor, and the three bedrooms and bathroom on the first floor, are facing it. On the other hand, the utility rooms and hallways are Northwest oriented, facing the street, which also shows in the stern character of the street façade.
During the project we tried to preserve all that was important and remove everything useless. The aim of the project was to preserve the identity and quality of the house, while reacting to the needs of the present era.

Based on its exterior character, the villa was listed as architectural monument and we tried to save its unique figure, window panes, façade character and architectural details. At the same time, it was necessary to deal with the building and technical challenges arising from the used constructions and materials of the time.

The house was designed as a reinforced concrete frame walled in with hollow blocks. We performed extensive technical research, measured window and wall heat passage and did thermal photography before we began our work on the design. Our enquiry revealed significant heat bridges caused by the frame load-bearing construction, insufficiently insulated roof and damp basement walls. On the other hand, the window thermal transmission coefficient turned out to be surprisingly good. We approached the renovation based on our findings and with the improvement of interior environment quality on our mind. The modifications consisted of replacing the original roof structure with a modern one, adding 5 cm of thermal insulation to the façade, and a combination of hydro-insulation and other technological arrangements ensuring the usability of the underground premises, something that was previously impossible. At the same time, we executed energy and economic studies. These determined that a gas boiler would be most efficient for heating and water heating. Heating is provided for by floor heating in combination with tubular radiators contributing to the unique interior character. An air-condition unit was placed into the basement. It should provide permanent ventilation in case of humidity penetrating from the exterior.

Cone-shaped exterior walls, rough combed stucco and oak windows were characteristic to the unique exterior design. Unfortunately, the stucco was badly damaged. Despite all our efforts it was unrepairable, and we had to replace it. Fortunately enough, we were able to find a technical and aesthetic solution that was almost identical to the original, including colour and structure. Before the actual application of the finish, we performed numerous test samplings directly on the façade structure.

As was mentioned before, the oak windows of various sizes and shapes are one of the house’s characteristic features. Architect Grégr designed the shapes with regard not only to the interior and its’ views of the landscape, but also to the meticulous composition of the exterior mass. New windows are an exact copy of the original ones, including their surface finish. The metal fittings were restored and used again. The craftsman working on the windows spent over a year at the site, since he had to transport the windows to his workshop one at the time to ensure that the new ones were a truly exact copy.

The house interior suffered from the unoriginal silt and “creativity” of its owners from the second half of the 20th century. We strove to remove this alluvium to emphasize the original very simple but very impressive concept. Changes to the original lay-out were minimal with regard to present functional needs.

A super-elevated living room equipped with a hearth and piano space is in the heart of the house. It mirrors to the façade by its high double wing windows. Connected to the living room are a dining area and a former library that now serves as a bedroom. All the living premises are serviced from the hallway adjacent to the northern façade. Therefore the inhabitants would not be disturbed by personnel. Three bedrooms are located on the first floor. A new gentleman bathroom, that was originally not part of the solution, was supplemented. Very important was the new basement solution. The basement was previously uninhabitable due to severe dampness. Now it was dehumidified, it is possible to use the underground premises as full-fledged part of the house and thus two dressing rooms, utility and technical rooms and personnel background were established here.

The characteristic design of the entire house is underlined by wooden elements, mostly made of dark mordant oak. We managed to preserve the elements referring to the American inspiration, such as the large sliding doors with a rare “ejector” fitting, unique banister, hearth or window frame details.

The quality of the reconstruction does not lie in any serious innovations but in the humbleness with which we approached the original design. We endeavored to save the beauty and historic value of the house and at the same time to fulfil the present aesthetic, functional and technical requirements necessary for the full-fledged life of the house and its inhabitants.