Brooks + Scarpa have recently completed their latest project, a 60 Unit mixed-use inclusionary apartment building in North Hollywood, Los Angeles. Take a look at the complete story after the jump.

From the architects: Offering shelter and comfort, 11NOHO eschews the typical neighborhood defensive apartment buildings with solid walls and fences in favor of a carved-out cube, a beacon in the neighborhood that celebrates social space by de-emphasizing private space. Strategically placed windows, purposeful exterior circulation and units that wrap the outer-most edges, orient the 60 apartments to social spaces that are spatially apart, yet visually connected to each other and the street below.

Courtyard apartments have a rich history throughout southern California ranging from Irving Gill’s 1918 Horatio Court to the classic post-World War ll Spanish Colonial Revival Ambrose Gardens. According to Ken Bernstein, director of preservation issues at the Los Angeles Conservancy, a lot of the courtyard apartments build during this time, especially in Hollywood and West Hollywood, was part of a search for indigenous architecture,” he says, as much as an attempt to create neighborliness. More than any other multi-dwelling housing, courtyard apartments, “make you feel like you belong to a place.” For people living around the courtyard, the space provides a sense of safety and privacy; the courtyard is a quasi-public space that mediates between the home and the street. For the city at large, the courtyard is an urbane housing type that fits well into neighborhoods.

The courtyard is only one aspect of a successful design. 11NOHO builds on this local housing typology, but unlike those earlier traditional buildings, it is more idiosyncratic – creating increased security, privacy and openness while connecting to the greater community outside the building walls. Being located one block from the Hollywood freeway in the emerging NOHO Arts District this mixed-use structure also includes 3000 square feet of retail and 12 units set aside for low-income tenants. By including affordable housing within this market-rate project it allowed the developer to take advantage of California State Assembly Bill AB763 for increased height and density, increasing the project density from an area average of 20.64/DU/A to more than 90 units/acre. This much needed affordable housing provides poor and disadvantaged populations housing in an affluent area of town where low wage workers are critical but unable to afford to live. It also contributes to much needed housing stock in short supply in Los Angeles. 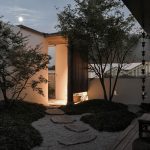 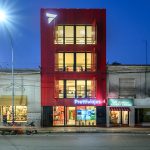