Susanna Cots designed this inspiring apartment located in Barcelona, Spain, in 2016. Take a look at the complete story after the jump. Finding equilibrium in the frenetic pace of the city; extracting the natural light and brilliance from one of the metropolis’ most singular districts; only revealing what you want to show; beating the daily stress hands down: this is the tranquillity that the interior architect Susanna Cots has managed to transmit with her new Urban White design.
Interior and exterior complicity
The owners of this home located in the high part of Barcelona wanted a haven of tranquillity and at the same time to be able to enjoy one of the best views of the city. The interior architect Susanna Cots has designed a space in 180 m2 that satisfies both desires, especially with the ingenious visual integration of interior and exterior that creates a unique atmosphere in the common zones.
The key element that makes this interior-exterior union so special is an outside fireplace outlined by a black frame that encompasses the outside patio and joins it visually to the living room, merging the two spaces through a glass door by Vitrocsa that, fully open, creates a generous common area.
In the living room the designer has placed a diagonal indoor fireplace that acts as the partition with the kitchen, subtly creating the volume of the latter and merging it again with the cabinet that conceals the television screen.
The kitchen, designed along the lines of a laboratory in conjunction with the firm Bulthaup, is a cubicle that both separates and merges the kitchen with the living room through the service zone.
A glass lung in the heart of the dwelling
One of the most unique areas of this development is found along the passage, where timber-lined panels with white enamel paintwork recover the essence of the panels with moldings from the 1950s in a contemporary interpretation.
They are enlivened by small cubicles that become vases with natural plants that contribute a fresh touch to the space. At the same time the designer has used these panels to conceal various rooms such as the courtesy bathroom – in mosaic tiling by Bisazza – the main suite and children’s rooms. The entrance door to the living room follows the same panel design as the passage except that the recessed moldings are now executed in iron.
At the heart of the dwelling there is a room that serves as a nerve centre for rest, disconnection and study for both adults and young people. It is composed of glass and timber elements and features a lighting fixture in wooden slats that frame the luminaires, contributing continuity to the entire volume.
Intimacy and seclusion in the sleeping area
Composed of four rooms, the design of the sleeping area brings together two basic materials: oak and white enamel paintwork. On the one hand, both the parquet and the platforms and furnishings are finished in wooden planks by the Italian firm Listone Giorano. In contrast, the clarity and lightness of these rooms is due to the white enamel paintwork. The combination achieves a timeless effect where tranquillity and serenity find, at last, their place in the Catalonian capital. 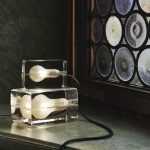 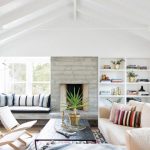