MMC DESIGN conceived an office and exhibition space for textile manufacturing company Springair in Hangzhou, China. The aim was to design a workspace that could enable its users to focus on working while reflecting on life. Based on the concept “Life is a gleaming journey”, they combined the real and virtual to create a poetic, eternal space that transcends logic and norms.Discover more after the jump.

Space embodies the way of life to some extent. As approaching the project, the designers thought about what kind of workspace could enable its users to focus on working while reflecting on life. Based on the concept “Life is a gleaming journey”, they combined the real and virtual to create a poetic, eternal space that transcends logic and norms.

The end scene at the entrance was designed based on children’s physical height and perspective, in order to evoke sensibility and naivety. The greenery enlivens the atmosphere, and the ball beside the wall echoes Sisyphus’s rock in Greek myth.

Sculptures in this area carry ancient philosophy and childish innocence, and become mysterious symbols that produce a serene spatial atmosphere.

Walls complemented by distinctive lighting and curves on the top endow the entire space with a restrained, calming, deep and isolated feeling, like a cave. The spatial structures feature geometric shapes and are organized in a way like kids’ building blocks, appearing solemn yet childish. The interior is dominated by gray hue, and highlighted by dynamic red.

Storage spaces are converted into “micro caves” within the large “cave”, so the stored objects naturally become components of the space.

Within the space, MMC DESIGN created an eternal and massive virtual world, which is hinted by details and curves.

Details such as dense lines, small staircase-like blocks, rich layers and turns of walls are accentuated by lights and shadows.

As moving within the space, users will be immersed in a dreamy spatial journey that transcends time and leads to the inner mind.

The workbench draws inspiration from Ariadne’s thread that helped Theseus find the way out of the labyrinth in Greek mythology. Its streamlined red surface penetrates the area under the arched ceiling, adding smoothness and freedom to the space.

The twisting lighting strip above resonates with the table surface, seeming to bring people out of the “cave”.

Classical Greek column lines and undulating wall curves are incorporated into the working space, creating an inspiring setting that evokes discussion and meditation and touches the heart. 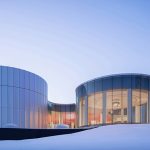