Italian cultural association named “archiSTART” is a creative collaboration composed of three young graduates in architecture. Their aim is organizing architecture and design competitions addressed to university students as well as young graduates.

The cultural association archiSTART, under the sponsorship of Melpignano municipality (LE), showcases the results from the international competition of idea design for “Taranta Power Station” addressed to students and young graduates who as project subject had a mixed-used building. The design is supposed to be suitable for welcoming service areas for Notte della Taranta event as well as educational and museum areas involved with the festival.

ArchiSTART is a no profit association originating from the idea of three young graduates and boosting the experimentation, growth and visibility of young designers who can express themselves through competitions of ideas. This goes together with the creation of a platform for the Public Administration in order to identify and deal with urban and architectural issues not covered by the territorial scheduling.

The first competition has gained a remarkable echo both locally and internationally, involving more than 500 young people from all over the world. 92 projects have reached the final stage of the competition (65 from Italy, 10 from Europe, 12 from America and 5 from Asia) with original proposals and different approaches.

The jury of the “Taranta Power Station” competition, composed of the Architects Alfredo Foresta, Toti Semerano and Simona Serafino, the Councillor for youth policies of Lecce Municipality Ing. Alessandro Delli Noci and the Professor Giuseppe Schiavone, President of the urban observatory Teknè, has appointed PIQUADRO team of four young students from Polytechnic of Bari (Maura Pinto, Sonia Paciolla, Francesca Papa, Piervito Pirulli) winner of the competition, at the second place equally placed the team ZARIAN composed of two Erasmus students (Nimitchai Amornprasertsri, Prap Chaiwattana) and PH2 (Claudio Bambagioni, Valentina Aloe), both from Polytechnic of Milan. The meeting of the jury took place on 28 october 2013 at Officine Cantelmo, in Lecce.

The winning projects has stood out for the ability of the teams to understand the territory through the projecting of a building that improves the area fruition and highlights the Notte della Taranta. The ideas proposed represent an added value for the referring area and they can be actually realized. Moreover the jury has assigned eight honorable mentions to the projects which have been able to well interpret the announcement and have raised the interest and appreciation of the jury. 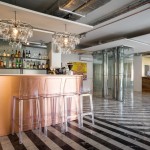 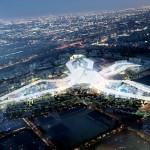