Liepaja concert garden "Put Vejini" was an important place of Latvian culture in 20th century, hosting the local scale festivals. Now the goal is to return this function, to renovate the existing building and to restore the attraction of the site as a place for open-air music and entertainment. Small contemporary cultural space should become a source of pride and a recreational opportunity for each citizen of Liepaja.

The concept of the concert stage is based on the acoustic possibilities of building. The goal was to achieve maximum acoustic potential using minimal amount of materials and get an aesthetically appealing image of a concert hall. The world’s best architect is Nature, so the architects have borrowed the natural shape of the oyster shell, which carries good acoustic capabilities and is consistent with the general typology of the building, as well as has a good visual effect.

With the aid of parametric modelling, architects have created the shape of shells, where edges have not only aesthetic, but also structural and acoustic function. According to the laws of sound distribution, the sound penetrates the edge of shell, absorbs and covers all audience without creating echo effect.

Building supporting frames is exoskeleton structure arranged at an angle of glued wood frames, which are connected by steel rods and covered with wooden roof. Building self-supporting frames hanged acoustic panels. Glued wooden structures were selected in the context of the park, and taking into account the environmental sensitivity of the material.

The proposal includes 2 options of the spatial solution. Despite the large visual difference between the two options, the difference is only in the form of supporting frame section. Plans, elevations, and longitudinal section of both of the variants are basically identical.

The proposal is one of the awardees on Put Vejini open architectural competition held this year. 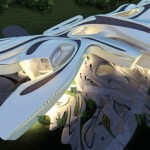 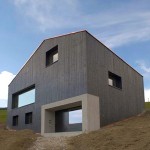