The now completed Factory Berlin Campus is work of architects at the Julian Breinersdorfer Architekten practice, the project is located in Berlin Mitte. The start-up campus hosted by Google is also home to internet’s leading companies such as Soundcloud, Twitter, and 6Wunderkinder to name a few. The main building itself is connected to part of history, standing on a part of the Berlin Wall that once ran along Bernauer Straße

The initial design was once known as the Oswald Berliner Brewery, while as part of the Berlin Wall the third floor windows facing what was West Germany served as outlooks for GDR watchmen.

For more of the project continue below: To highlight the beauty and integrity of the original structure, we aimed to recreate the pre-World War I facade as accurately as possible, as hardly any historical photos or original plans exist. The removal of the plaster cladding to reveal the original brick facade was a tricky undertaking due to strict German regulations regarding climate protection. The circulation and spatial logic were manipulated to satisfy the requirements of a 21^st century start-up landscape. The offices of the internet company Soundcloud, for example, occupy formerly separate building parts and floor levels that were laced together with open internal staircases, creating a continuous spatial system connecting three floors of office program.

The addition of the new fourth and fifth floors demanded a careful response to the distinct structural and spatial properties of the old building parts. Thus, the design process for the two top floors can be best described as a cat lying down on a rugged stone wall, shifting and turning until it finds a suitably comfortable position for an afternoon nap. – from Julian Breinersdorfer Architekten The resulting topography forms a village-like arrangement of white volumes, which are home to clusters of small start-ups, gathered around a central outdoor plaza on the fifth floor. The ground floor hosts co-working spaces and a restaurant, and is open to the campus courtyards,
gardens, terraces, and event spaces in the basement. The basement of Factory Berlin consists of distinct, multipurpose areas including 400m² halls and circular brick spaces, which were once occupied by massive round oil tanks. The complex subterranean program has been optimized to allow full indoor-outdoor event circulation. – from Julian Breinersdorfer Architekten

For more of the Julian Breinersdorfer Architecture log on to www.julianbreinersdorfer.com. 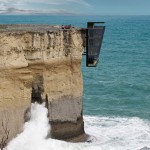 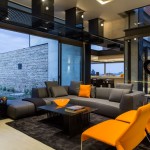