Estudio VIC were in charge of this stunning kindergarten remodel in the city of Santa Fe, Argentina. Take a look at the complete story after the jump.

From the architects; The education institution “Dr. Sara Faisal” has strong ties and background inn educational services in the city of Santa Fe, Argentina. This long lasting history requires the constant building renovations that this Institution regularly implements in each and everyone of its five academic’s units.

In this opportunity, in coincidence with the celebration of the fiftieth anniversary of the establishment of the kindergarten unit, the institution requested the reform of the building where it was located. This building provides services to babies (one year old and older) and children in their initial stages of systematic education.

This institution was a pioneer in the city of Santa Fe in the introduction of a pedagogical system that integrates early childhood education and diversity. The original building for kindergarten services was made by a conglomared of different sub-units. For example, one of those buildings was used in teacher preparation and the professional development of kindergarten teachers.

By the mid nineteen eighties with the availability of a land area for building another sector, the institution decided the use of the typology of a high level building. This building included different classrooms and of a multiple service area (fishbowl). As time went by and in addition to the need of new spatial organizations and requirements for educational services, the institution supported the rebuilt of the K and pre-K classrooms. This happened at the same time of the fiftieth year anniversary and to provide new spaces up dated and relevant for early childhood education. This reformed areas where thought to operate as an ‘entrance’to the educational areas, and its educational offerings that include from early childhood to higher education.

In terms of architectural projects the main goal was to refunctionalize different units and sub-units, and to open and integrate the flow between different classrooms and the outside. The Project was influence by pre-existing building conditions in a dynamics of convergences and tensions.
As leaders in the design of this project we became aware of the relevance and weight of the pre-existing conditions, not only in the building structures, but also in the ways in which this community used them, they function, and how they were used for different activities. As a result of these processes there was a reinvention or a reformulation of spaces, that at the end, acquired other conditions and qualities.

The main challenges in this project were to develop “spatial continuities”, visual and physical linkages, and the integration of different spaces that had not been interconnected. Another designers decisions were focused on changing and re-designing the area for the Access to the building. This changes consisted on adapting the entrance area of the building for the support of students with disabilities, implementing the premises of “universal access” requirements and also for the sequence and a organization of mobility flows within the whole area. In addition, it was decided the creation of an entry area with a garden to support the flow and the gathering of different members of this educational community within this building.

This entry garden, which also operates as a welcoming space, was remodeled using different textures and colors. Additionally, the changes in. this space allowed to connect different building layers and a more effective use by setting one floor level.

Everyday, in this area different practices to transition in to activities of the day are held.
Different operations were implemented to modify the first and second building levels, for example, walls were demolished or windows and doors were opened. This allow the flow between halls and the classroom areas. The administrated areas and principals offices are situated in the bottom floor. The music classroom and the fishbowl are located on the opposite site of the building with connections to the backyard. These allowed the expansion of the areas for outside activities.

The first floor was refunctionalised ed as a result of the development of a connection between two areas that were not connected before.

This happens as a result of the building of a hall and aisle that articulates the circulation among classrooms, restrooms, and the new elevator.

One integral strategy of this project was the creation of areas without walls and without obstacles with the addition of halls that support the flow of people and activities.

The model followed the use of colors and textures, similar to the strategy once developed in the Special Education School (Santa Fe city, 2016). This intended to express warmth and social commitment to the children who attend this school. 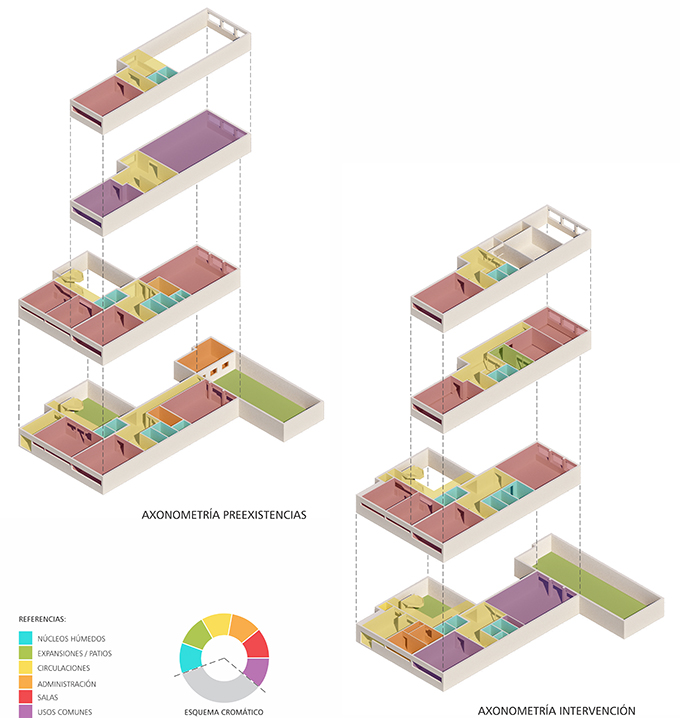 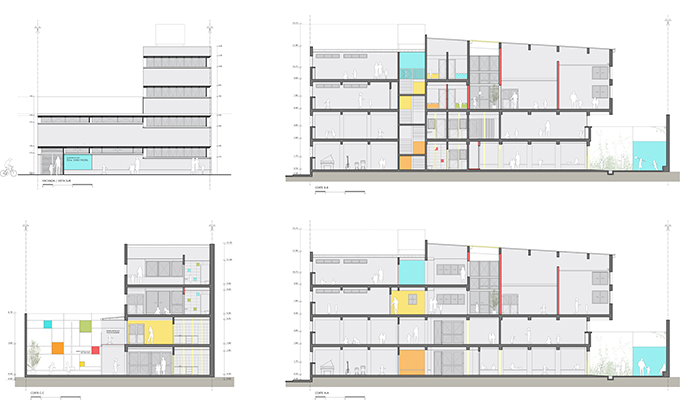 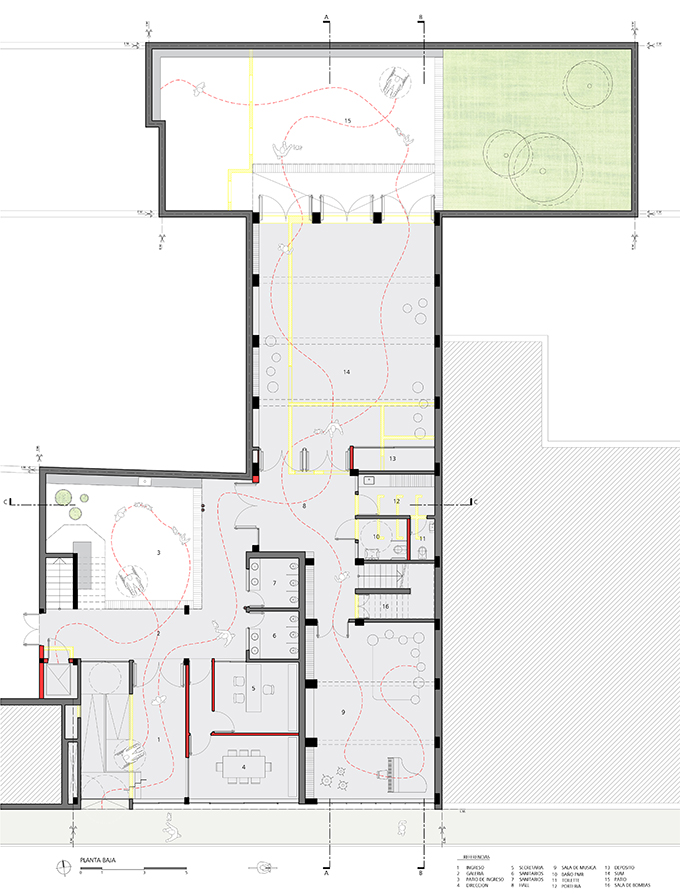 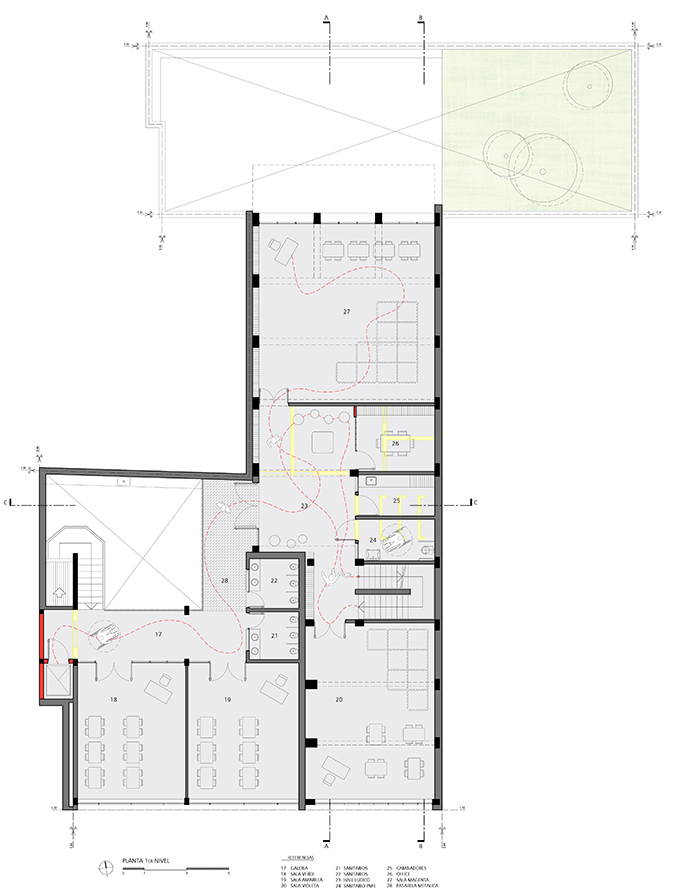 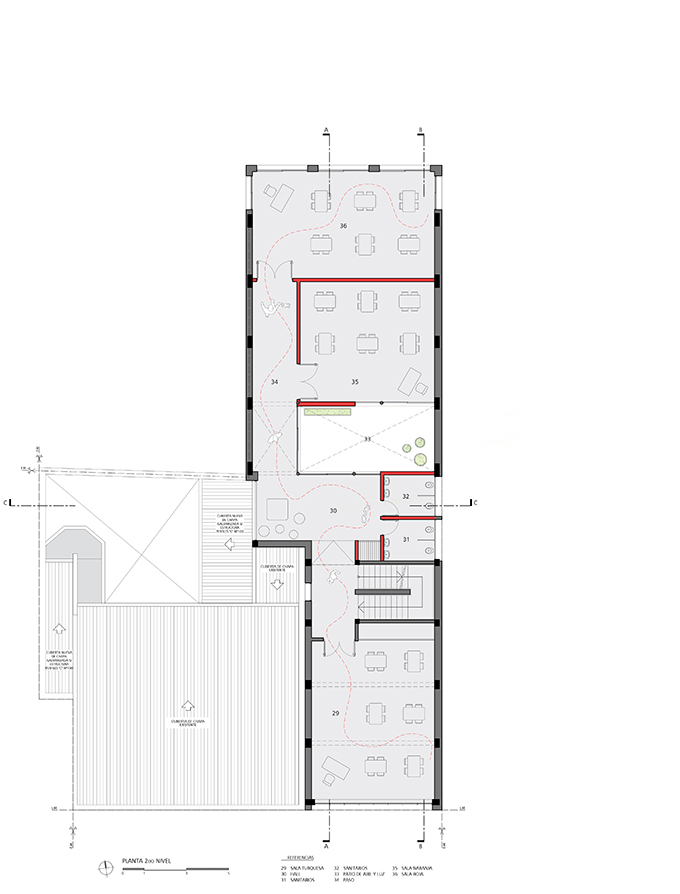 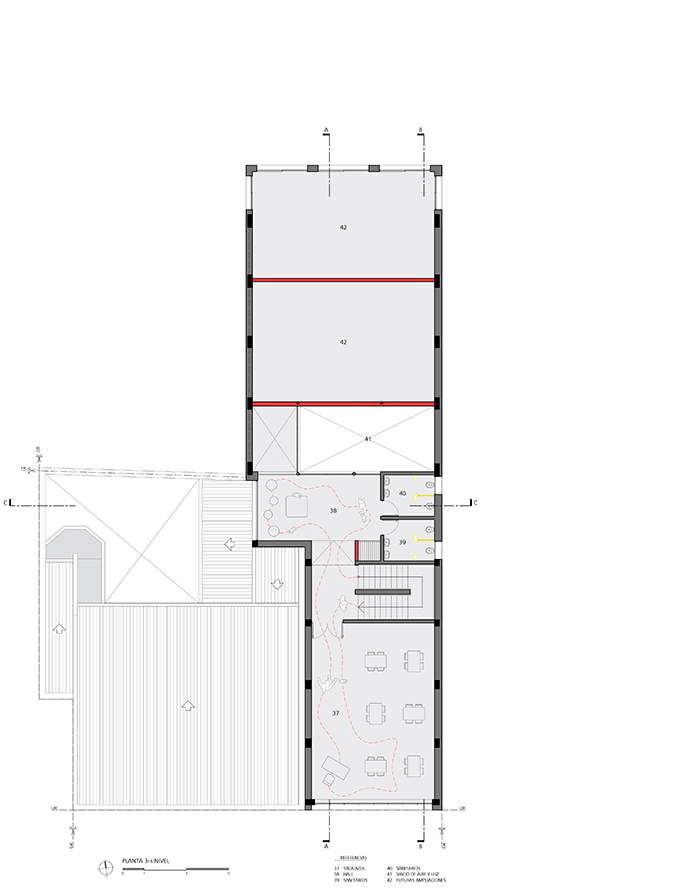 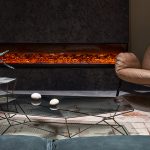 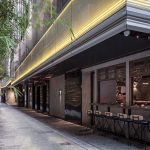