The new regional head office of the United Nations conceived by 3XN Architects is designed with clear references to the UN’s identity and values: It is a building that physically reaches out to all parts the world, while the sculptural staircase in its core reflects the UN’s work to create global dialogue. Bringing together the various agencies and functions of the United Nations regional offices in Copenhagen, the new UN City is located at Marmormolen (The Marble Pier) north of Copenhagen’s city center. 3XN’s design is a response to the UN’s wishes for an iconic building expressing the organization’s values and authority. More specifically, the design reflects the independent, efficient and professional nature of each UN unit, while at the same time clearly rooted in a mutual set of values – Delivering as One.

Located on an artificial island the building is naturally separated from its immediate surroundings, while still being highly visible from both the city and the water. From above, the eight-pointed star shape is a clear visual reference point, which, like the UN, reaches out to all corners of the world. Similar to the surrounding rusty pier edges, the UN city has a dark burnished steel base from which the white main building rises. This is a reference to the elegant white ships that characterize this part of the Copenhagen harbor.

The building has a façade cladding of white perforated aluminum shutters, developed by 3XN and contractor Pihl specifically for the UN City. The shutters ensure solar shading without blocking the view or the daylight. Since the facade is divided into three meter long modules, it is possible for the employees to control the sunshade from their computers. The result is an improved indoor environment, and a dynamic façade expressing a building full of life. From the core of the star-shaped building, a daylight filled atrium connects the lobby level containing all common functions, with the office levels, where the various UN agencies are distributed.

From the atrium a central staircase binds all levels together. 3XN has created the staircase as a dramatic spatial sculpture, which is to be seen as a symbol of the UN's work to create dialogue, interaction and positive encounters between people in all parts of the world. In the daily life, the sculptural form inspires the UN employees to want to use the stairs, and thus the staircase also forms the basis for dialogue, cooperation and informal meetings between the various UN organizations.

All office levels are characterized by an open and flexible layout encouraging knowledge sharing and interaction as well as individual immersion. Work stations are ensured plenty of high quality daylight and a good indoor climate. The working environment is further improved by an overall health policy including green recreational areas and a number of sustainable features including:

Air quality – The building has been designed to limit the use of chemicals and pollutants during both its construction and its use. The building is entirely ventilated with filtered outside air. This ensures that only clean, fresh air is present in the building and helps balance the interior humidity level.

Solar panels – More than 1,400 solar panels are lining the roof of the building to support the goal of generating renewable energy onsite. With an estimated total production of 297,000 kWh/year, the solar panels significantly reduce the need for electricity from the grid. Water efficiency – Innovative aerators have been placed in the taps in kitchens, toilets and showers throughout the building. The low-flow taps reduce water usage. In addition, pipes on the roof capture almost 3,000,000 litres of rainwater annually, which is almost enough to flush the toilets of the entire building without using potable water.

Solar shades – Sophisticated solar shades on the building’s facade can be opened and closed to either trap or reflect the sun’s heat.

Reflective roofs – The roof of the building has been coated with a white, recyclable membrane, made from plant-based materials. The environmentally-friendly coating reflects sunlight and reduces the solar warming of the building.

The UN City is expected to become one of Denmark’s most energy efficient buildings with an annual energy consumption of less than 50 KwH per m2 (Danish Energy Class 1). The UN City is registered with the LEED sustainability ratings system with the certification goal of LEED® Platinum. UN City has been awarded the prestigious GreenBuilding Award 2012 by the European Commission. 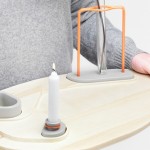 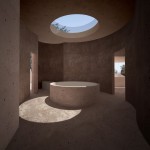