Schmidt Hammer Lassen Architects has completed the design for a unique new cultural home for the city Labour Union in Ningbo, China. The 100,000 square metre project, known as the Home of Staff, was won by schmidt hammer lassen architects in an international competition in 2013. With an eclectic mix of functions, split across two separate buildings, the project is linked by a landscape park stretching over half a kilometre. The Home of Staff provides support, health, education, culture and leisure facilities for almost 3 million Ningbo Labour Union members. The Ningbo Labour Union has named the project the Home of Staff as they see it as a second home for the members they represent. The project sits at the centre of Ningbo New East Town on the edge of a new ecological wetland area forming the new cultural hub of the city, including the New Ningbo Library, also designed by schmidt hammer lassen architects.

“We have designed the Home of Staff as a series of stepped building volumes that are linked by a landscape that rises from a central public park to become a series of accessible green roof terraces”, explains Morten Schmidt, founding partner at schmidt hammer lassen architects. “The volumes, which from the air appear like a pixelated image, rise up at each end and form two individual buildings that are connected by a sunken walkway and a series of park pavilions.”

The Home of Staff contains an impressive list of functions. It has arts and performance spaces, sports, leisure, education facilities and offices – all built on a base of commercial retail and exhibition space. The cultural functions of the building include a 3-screen cinema, a 1,200-seat performing arts venue, an exhibition hall, a Union Staff arts club and service centre, and training and learning facilities for up to 600 students.

The sports and leisure functions include an aquatic centre with Olympic-size pool and large-scale wave pool, a full-size basketball court with spectator seating, 2 indoor tennis courts, 10 badminton courts, a fully equipped gymnasium and table tennis centre. Furthermore, the two buildings are linked with a series of retail courtyards and dedicated office space for the Ningbo Labour Union administration.

“Ningbo Home of Staff and the City of Ningbo are an ambitious client”, explains Chris Hardie, associate partner at schmidt hammer lassen architects and partner in charge of the studio’s Shanghai Office. “The client wants a project that defines the vibrant and lively city that Ningbo is. Our design will embrace the landscape of the city’s wetland setting and create synergy across all the services the Labour Union provides to their members in a single holistic project.” The Home of Staff is expected to be completed towards the end of 2016, and is the third project designed by schmidt hammer lassen architects in the city of Ningbo. In December 2013 schmidt hammer lassen architects won the competition to design the 30,000 square metres New Ningbo Library, and in October 2013 the ground-breaking ceremony took place for the 123,000 square metres headquarters for Ningbo Daily Newspaper Group. 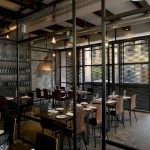 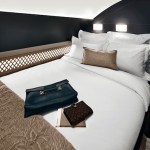