The architectural concept of the London Aquatic Centre is inspired by the fluid geometry of water in motion, creating spaces and a surrounding environment in sympathy with the river landscape of the Olympic Park. An undulating roof sweeps up from the ground as a wave – enclosing the pools of the Centre with its unifying gesture of fluidity, whilst also describing the volume of the swimming and diving pools. The London Aquatic Centre is designed to have the flexibility to accommodate the size and capacity of the London 2012 Olympic Games whilst also providing the optimum size and capacity for use in Legacy mode after the 2012 Games.

The Aquatic Centre is planned on an orthogonal axis perpendicular to the Stratford City Bridge. Along this axis are laid out the three pools. The training pool is located under the bridge whilst the competition and diving pools are within a large volumetric pool hall. The overall strategy is to frame the base of the pool hall as a podium by surrounding it and connecting it into the bridge. This podium element allows for the containment of a variety of differentiated and cellular programmatic elements into a single architectural volume which is seen to be completely assimilated with the bridge and the landscape. From the bridge level the podium emerges from underneath the bridge to cascades around the pool hall to the lower level of the canal side level.

The pool hall is expressed above the podium level by a large roof which is arching along the same axis as the pools. Its form is generated by the sightlines for the spectators during the Olympic mode. Double-curvature geometry has been used to create a structure of parabolic arches that create the unique characteristics of the roof. The roof undulates to differentiate an internal visual separation inside the pool hall between the competition pool volume and the diving pool volume. The roof projects beyond the base legacy pool hall envelope to extend the roof covering to the external areas of the cascades and the bridge entrance. The roof projection over the bridge entrance announces the London Aquatic Centre’s presence from the approach from either Stratford City or the Olympic Park. Structurally the roof is grounded at 3 primary positions. Otherwise the opening between the roof and the podium is in-filled with a glass facade. 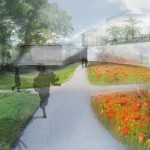 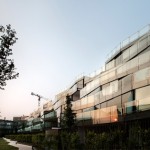