Studio Sequeira Dias Arquitectos recently completed their latest project in Ponta Delgada in the Azores – FUJI restaurant. The interior architecture aims to be symbiotic with the culinary menu and its far-eastern Japanese nature, as the restaurant’s idea is directly linked to the cuisine that the space intends to give. Take a look at the complete story after the jump.

From the architects: The interior design proposal was developed with a desire to provide the ideal conditions for a distinct and elevated experience through aesthetics and contemporaneity, all while meeting the program’s requirements.

The restaurant’s concept is directly connected to the cuisine that the space proposes to offer, and as a result, the interior architecture seeks to be symbiotic with the gastronomic menu and its far-eastern Japanese nature.

Given the limited space, the approach was to design a simple and sober restaurant, characterized by the use of  American oak wood furnishings and of anthracite grey walls and ceilings, which, although of contrasting nature, are meant to be speaking to one another.

The dining room’s wood ceiling presents itself as a hollowed out uneven orthogonal grid. Through the rectangular voids, the restaurant becomes animated by multiple light-shadow effects. The orthogonal grid becomes more apparent as it grows into the darkness of the ceiling. Some rectangles are filled with straw – a hollow weave of a tiny and intimate scale –, through which zenithal lighting comes out. The use of straw in the ceiling panels, as well as its use within the wine rack and on the display that precedes the sushi preparation counter, allow the space to be punctuated by a touch of liveliness, which juxtaposes against the otherwise somewhat orderly design.

While the abundance of wood seems to evoke the lines of trees and dense forests that have dotted the Azores islands since the 19th century, the anthracite grey hue of the walls easily propels us into the mist and fog that often blanket Azorean landscapes.

To walk into FUJI restaurant is to immerse ourselves in an imagined landscape, where the exotism of the Far-East intertwines with that of the Azores. Where the sobriety of the architecture merges with the exuberance of the gastronomy. 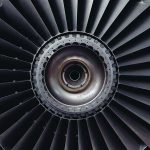 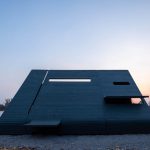