Architect Indiana Sarubi has recently completed works on this stunning private residence situated in La Paz (Entre Rios), Argentina. The project, which attempts to ask the natural terrain for permission to stand on it with the least amount of modification, was created based on the guidelines that the land and its surroundings supplied. It rests lightly on a number of points of contact, allowing the earth to move beneath the home as organically as possible. While nature, with its ongoing changes, likewise continuously transforms the house itself, the act of respectfully positioning oneself inside it causes a change in the landscape itself. Here the first mutually beneficial interaction between labor and its surroundings is established.

The design basis of this new project was evident at the initial visit and initial glance at the property. Nature in its purest form, with reverence. A gallery forest, a protected area, preserved the natural beauty of the region on the adjacent property. How can one overlook the power and energy that once inhabited that place? Both nature and the work created and constructed in response to it share the spotlight in this situation. No attempt is made to stand out, but rather to coexist while constantly reflecting on the importance of each component and casting a continual glance toward the remaining trees.

“Respect, Memory, are words that come up constantly when talking about the work. It is an architecture loaded with content, with meanings, which are transmitted from elements that refer to the very essence of the place as well as the people who inhabit it. Ceramics, screens, armchairs, full of history that make one look infinitely back to identity, to his legacy, to what made us who we are.”

Polarities like the fluidity-experimentation pair are good starting points for comprehending the project. The project’s foundation is the oscillating interaction between the interior and exterior as well as the sense of being completely surrounded by nature inside the refuge. The feeling of spatial warmth when looking out at the forested area from within is constantly sought after, as well as user experimentation. It is a home that, while being in the heart of a metropolis, gives the spectator the impression that they are in the middle of a forest.

The dwelling uses tectonics in many places, including the cantilever over the ditch, which in addition to showing off the building’s structure and construction method, enables a fresh perspective on and connection with nature. The dematerialization of the limitations, which enables a continuous link between the natural and the surroundings with the shelter and the architecture, is another feature that characterizes the tectonics of this work.

Regarding the house’s morphology, it is suggested that it be composed of two volumes that are joined by a corridor that is two meters wide. On the one hand, there is the social sector, which features a space that combines a kitchen, dining room, and living room, is open and completely glazed, and is notable for its connection to an outdoor space that can be reversed. The ceiling and the exposed concrete floor serve as its two defining surfaces. Large windows that connect them while dematerializing the envelopes and generating a porous space divide them from one another.

While evaluating it from the perspective of the technology that makes these planes stand out and stand out, the gallery that envelops this volume functions as an intermediary, hybrid space that permits the continual interchange between being outside and being within, or both. But it is important to note that this gallery also serves as a useful instrument for weather protection.

On the other side, there is a smaller volume with more private-feeling rooms. It has three bedrooms, one of which has a bathroom. Wide windows create well-lit, outdoorsy rooms. Due to two glass openings on either side of the passageway that dissipates this union, it is somewhat dematerialized on the exterior.

In terms of construction, cellular concrete bricks were employed in the private volume to improve thermal insulation. The entire home has thermal insulation made of projected cellulose, which is seen to be a choice that seeks an ecological environmental balance from both its raw material and from the effective insulation it produces. Despite having a huge volume of glass envelope, the work achieves the highest level of energy efficiency because to the apertures’ double hermetic glass and A30new aluminum lines. Because of this, the gallery and eaves once more play a crucial and active role. 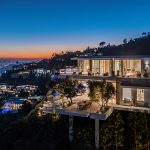 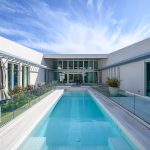