Cape Town-based architects SAOTA have recently completed works on Bellgave, a stunning private residence in Los Angeles. In the design of Bellgave, the architects drew on the modernist precedent established by the Stahl House and other groundbreaking Los Angeles Case Study Houses, reiterating and advancing some of their ground-breaking innovations that shaped the distinctive indoor-outdoor lifestyle that became synonymous with the city itself and a distinctive, climatically appropriate regional modernism. Discover the complete story after the jump.

The residence is located in the Hollywood Hills in a cul-de-sac above Laurel Canyon Boulevard. The property boasts unhindered panoramic views that stretch all the way from downtown Los Angeles to Santa Monica thanks to its lofty location on the edge of a steep cliff. Its north-south orientation lines up with the grid of the city basin below, and mid-century icons like Pierre Koenig’s Stahl House (Case Study House No. 22), which can be seen on a neighboring promontory to the west, set the tone for its architectural surroundings.

The architects elevated the house towards the view by building a platform on pillars and caissons, creating a sequence of intersecting and overlapping horizontal planes that extend forth from the cliff edge. With a feeling of volume and compression that responds to its specific character, the overhanging eaves and horizontal focus of the terraces reflect the city’s expansive vistas. It’s possible to think of the back of the home as a huge observation area.

Bellgave’s main lounge is situated in a cantilevered glass box at the front of the home that stretches outwards to enjoy the vista in homage to the Stahl House. The foreground is blended with the distant views of the Pacific Ocean by a rim-flow pool that runs down the edge of the terrace and appears to extend beneath it. This enhances the impression that the home is “floating.”

The construction and program of the home are organized according to the following straight-lined city grid, which serves as a “organizing principle”. Its geometry is both hovering above the commotion and simultaneously “in alignment” with the urban activities below.

This spatial order serves as the foundation for the house’s interconnected space arrangement. Spaces inside and outside are combined in a similar way. Al-fresco eating places, poolside lounging areas, and the dining and lounge are just a few of the interior and outdoor “destinations” that are anchored by landscape features like the sculptural olive trees. To offset the great scope of the vistas, interior and outdoor volumes are adjusted to create more private places. The bedrooms are located on the higher level, giving guests a feeling of floating above the city.

As a significant sculptural landmark at the end of the street, the entry at the end of a cul-de-sac, in contrast, has been built with towering, arcing walls that give a sense of confinement and “held space.” ‘Slices’ between the intersecting curves serve as the entrance’s apertures, letting light into the stairs while preserving seclusion. In order to serve as screens for the dramatic shadow patterns created by the light filtering through the trees in front of them, the walls were purposefully left bare.

As you go into and through the home and toward the view in a sequence from grounded, contained feeling to airy and elevated, these curving lines and the sense of embrace they produce at the entry give way to the rectilinear arrangement of the main living rooms.

The house’s restrained material treatments often pay homage to Los Angeles’ mid-century architectural style. Stucco, travertine, and wooden flooring provide a highly textured, warm, and sensuous palette that is neutral, sincere, and unadorned. The Mediterranean-inspired landscape, which, like the architecture, is perfectly adapted to the local temperature and related lifestyle, is complemented by the copious use of chiseled Jerusalem limestone, which is a more particular allusion to the adjacent J. Paul Getty Museum.

Bellgave pays respect to the architectural predecessors of California’s mid-century modernism while also looking ahead and expanding the potential of the early instances of the style as a contemporary adaptation of some of its traditions. 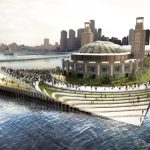 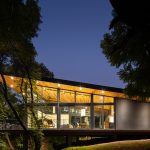