One of Spain’s most popular tourist destinations, the sleepy city of San Sebastian in the Bay of Biscay is home to scores of traditionally elaborate buildings which draw in thousands of travellers each year and provide a stunning backdrop for the internationally renowned San Sebastian Film Festival.

Young practice BABELstudio, founded this year by innovative thinkers Andrea García Crespo and Michael Schmidt, have presented flowing concepts for a new entranceway to the city’s underground system. Inspired by the classic cartoon ‘Pink Panther’ in which the long-legged cat slits a surface and skips inside, the studio has created a design where a horizontal line in cut into the pavement and lifted to form an curvaceous domed entranceway.

BABELstudio explains: “The object in sinuous curves emphasises its strong sculptural character demanding its protagonism in the urban scale. The entrances are conceived as landmarks of the city of San Sebastian, leading the users to recognise them as an inseparable part of the metro and the urban surroundings.”

In a dynamic twist, the external surface of the reinforced-concrete shell is coated in black ceramic tiles of varying textures cut into a hexagonal shape. The differing surfaces on these tiles animate the simple curve, with rough textures on the pavement gradually blending into softer enamelled slates at the apex of the dome. Internally, the white concrete will be highly polished to contrast dramatically with its external counterpart. The minimum section will be approximately 12cm. 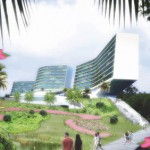 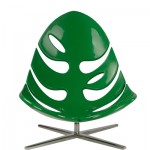