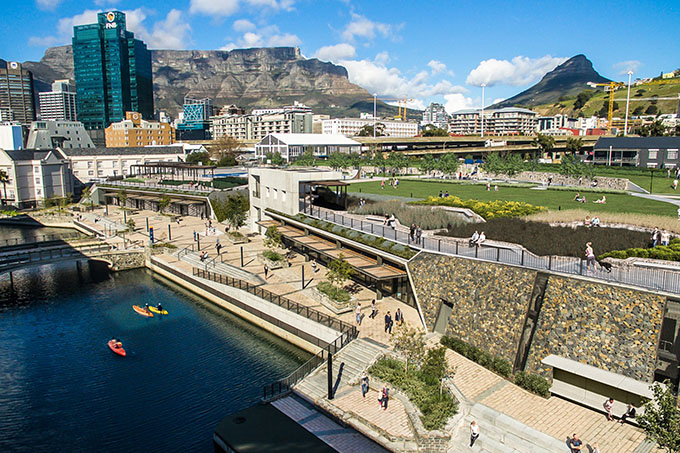 dhk Architects has completed Battery Park, a new urban park situated at popular tourist destination the V&A Waterfront in Cape Town, South Africa. Take a look at the complete story after the jump. 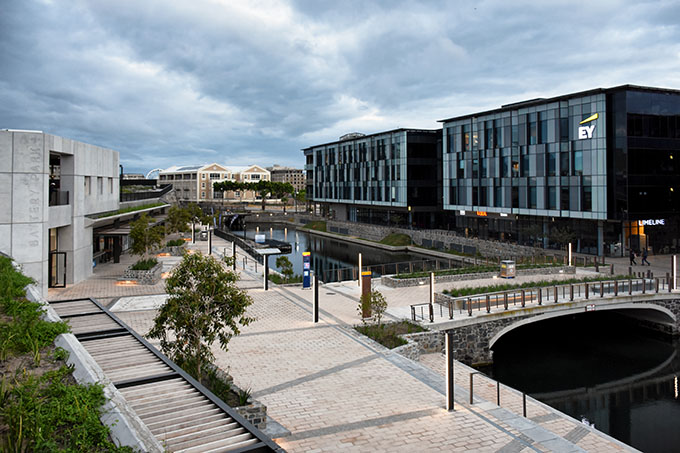 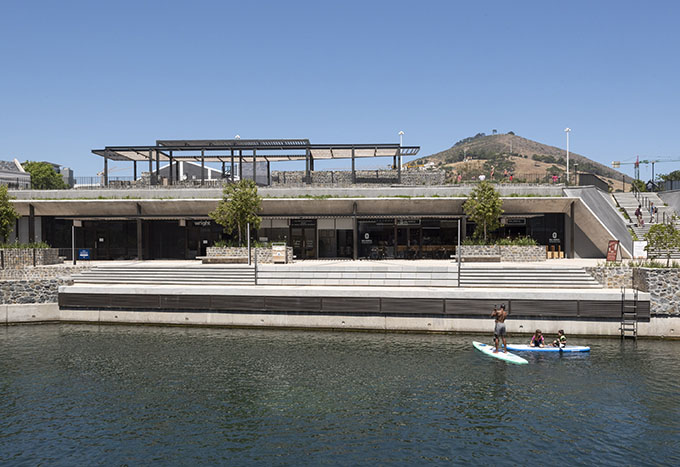 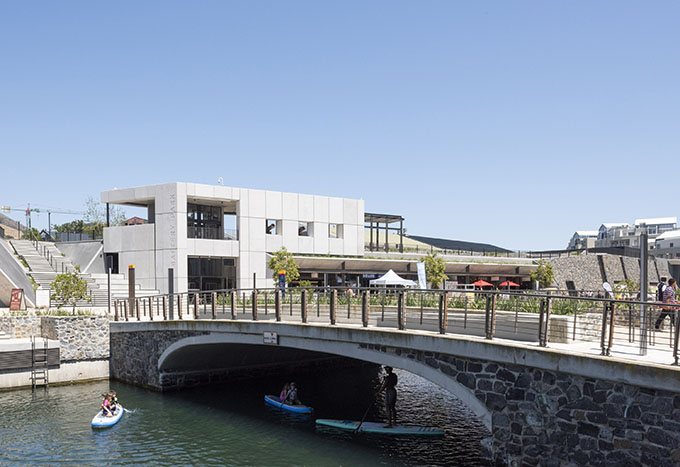 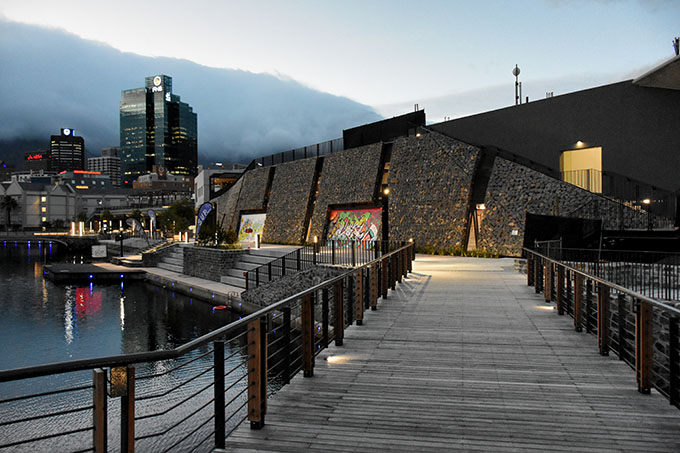 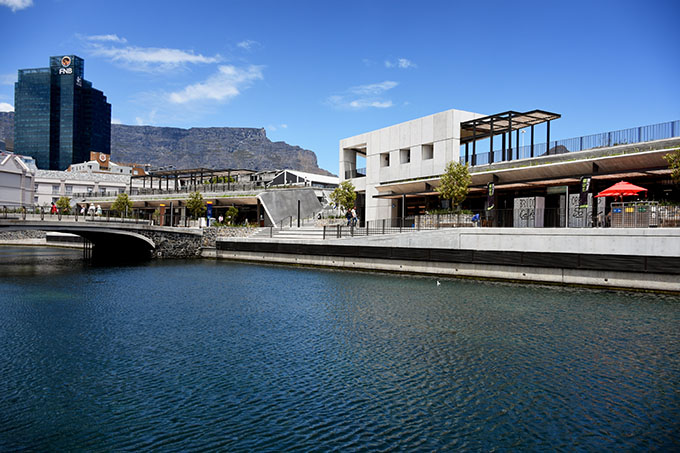 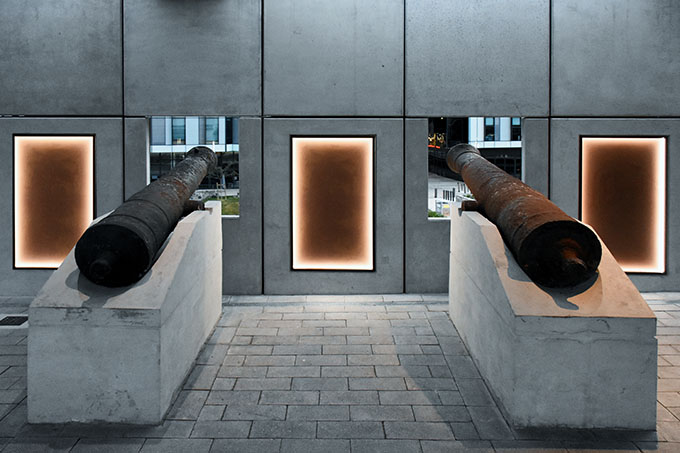 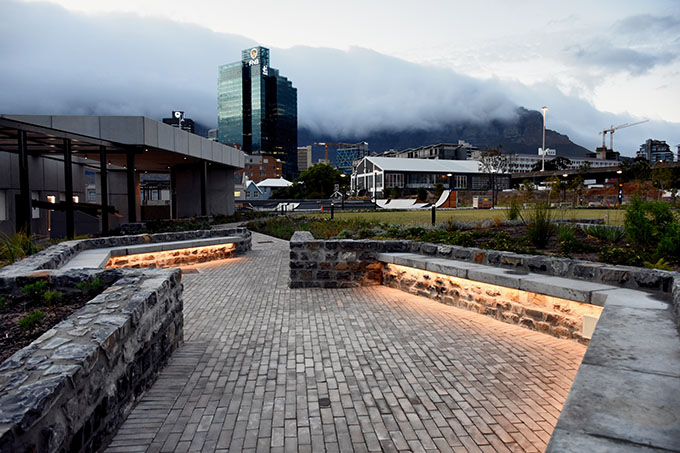 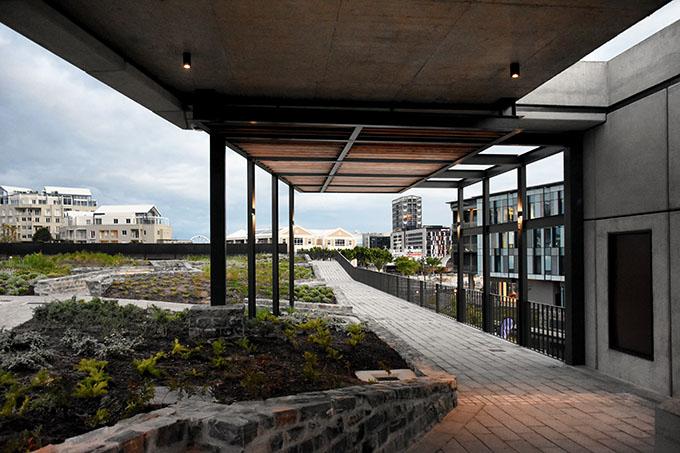 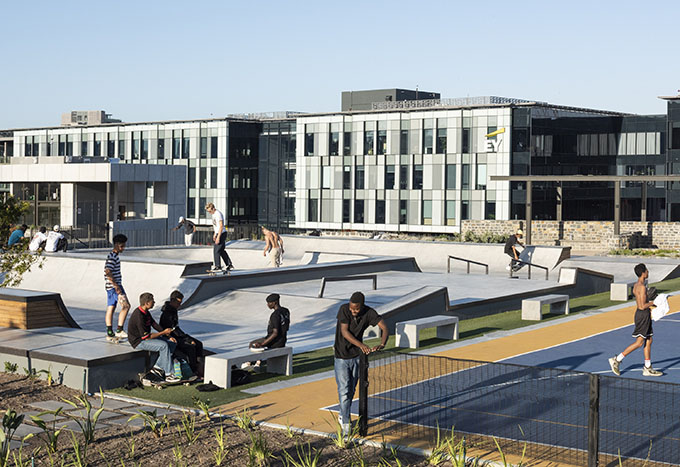 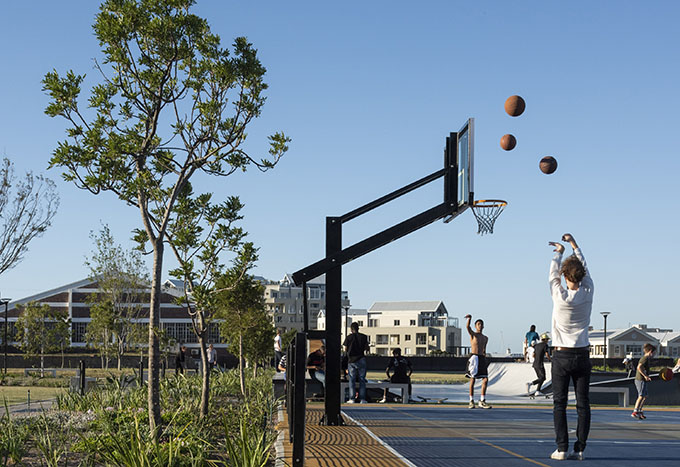 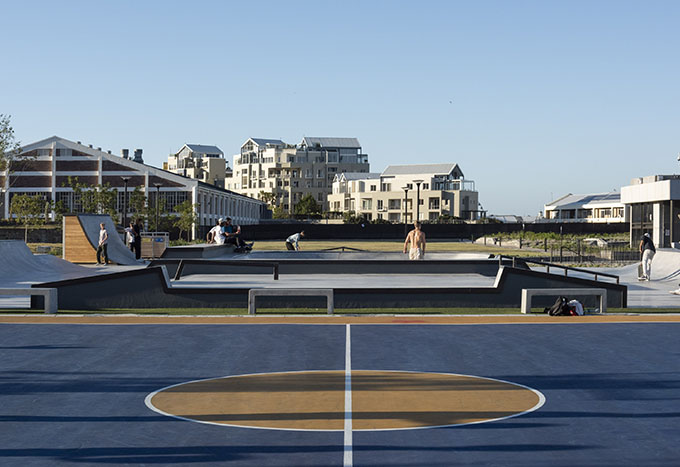 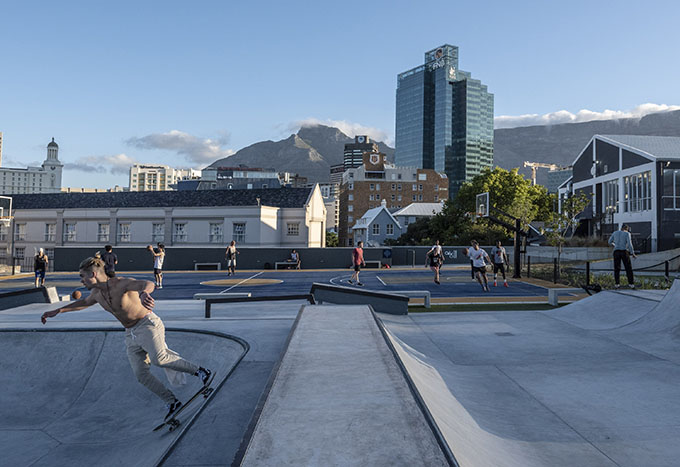 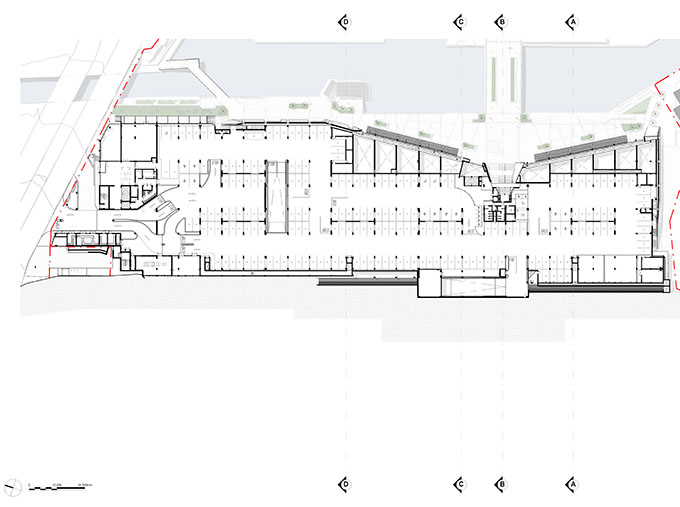 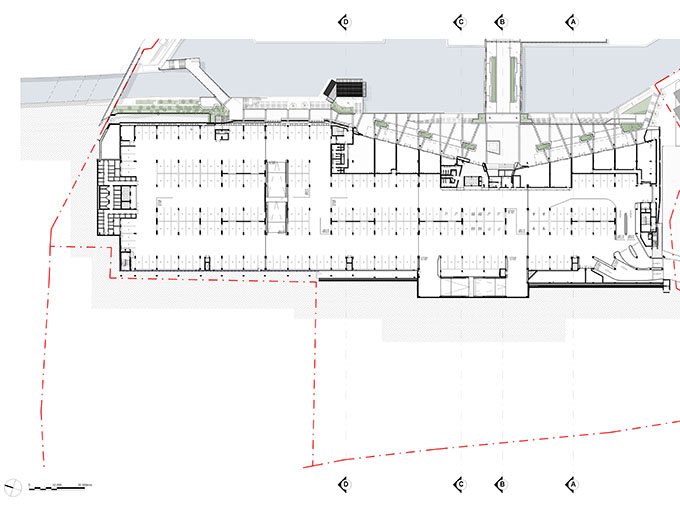 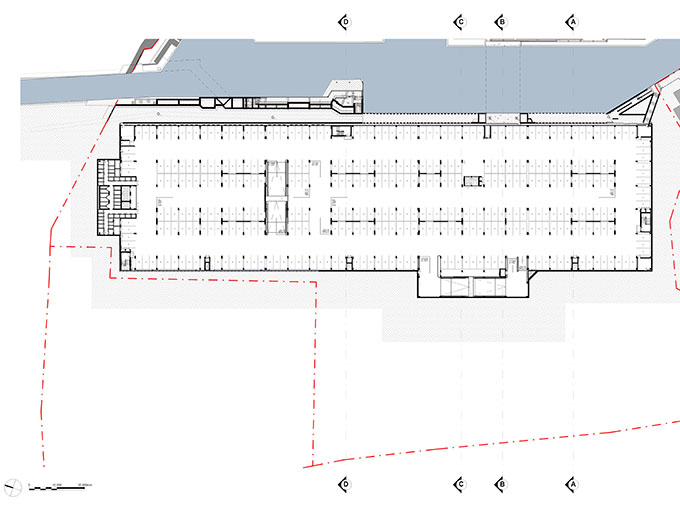 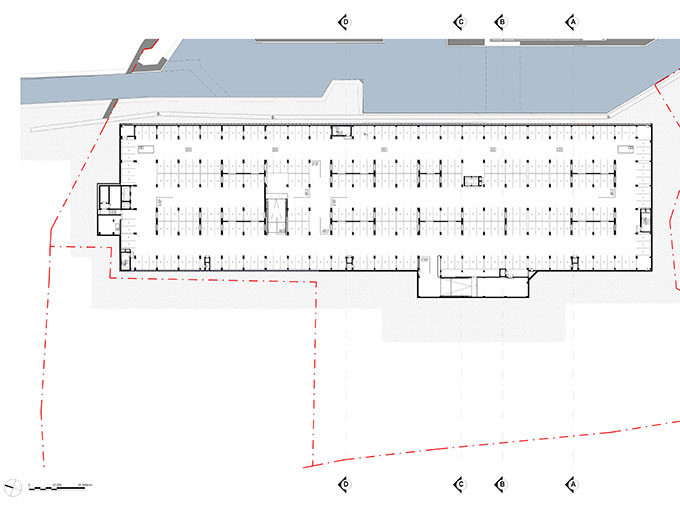 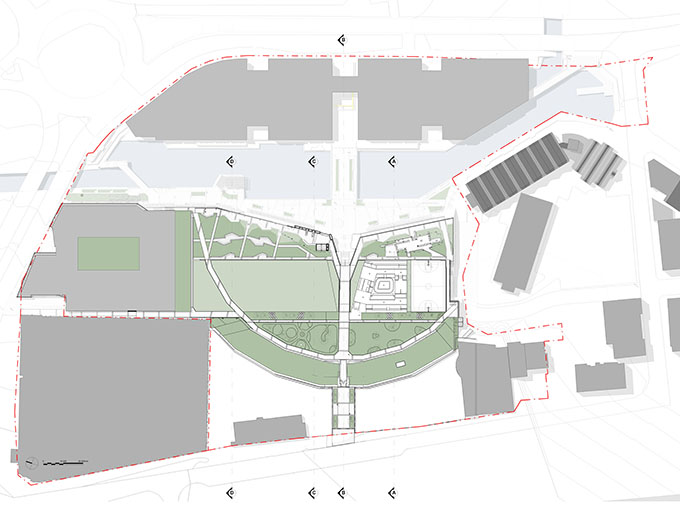 From the architects: Battery Park is a new 12 000 sqm (1.2 hectre) urban park situated at a key entranceway to one of Africa’s most visited tourist destinations, the V&A Waterfront in Cape Town, South Africa. Developed as the nucleus of a larger urban vision for the district, the site includes a park and piazza that effectively conceal a 1 206-bay parking facility as well as new pedestrian routes to invigorate the precinct with activity. The site is of archaeological importance as it contains the remnants of one of the city’s oldest structures, coastal fortification the Amsterdam Battery. This provided a unique opportunity for architecture and urban design firm dhk – to pay homage to the historic landmark whilst incorporating a parking facility and providing spaces for leisure and recreational activities.

The project forms part of an urban design framework created by dhk for the V&A’s previously underutilised Canal District that facilitates the reconnection of the historical city centre and De Waterkant to the V&A. The aim was to create a publicly accessible park which lies at the nexus of a multitude of new pedestrian routes stitching the new district into the surrounding urban fabric and thereby helping to invigorate the area.
The Amsterdam Battery was erected by the Dutch along Cape Town’s coastline in 1784 to defend the city from seaborne and land attacks. In the 1800s the building was used to house prisoners; and was later remodelled and strengthened by the British but eventually abandoned. In 1905 the battery was largely demolished to make way for railway connections to the port, leaving behind only a small portion of its rear curved walls. The historical remnants are now perched eight metres above the new canal running through the site at a lower level.

During construction of Battery Park archaeological excavations revealed former datums which were used to inform the design. The raised park has been kept at the battery’s original inner courtyard level whilst planted edges above retail units on the piazza represent the estimated natural ground level that fronted the battery. Various architectural and landscaped elements reflect the structure’s original footprint, such as semi-circular curved pathways, concrete additions to the rear ramparts, splayed canal-facing walls and concrete-clad structures – giving visitors an authentic sense of the battery’s former size. An axial visual connection to Cape Town’s Noon Gun on Signal Hill has also been retained, thus preserving the site’s historic sightline.

The requirement to respect the original inner courtyard datum and create a lower-level piazza resulted in an elevated park with views across the V&A and CBD but with the challenge of managing the transition between the two levels. Therefore, a large part of Battery Park’s design concept was manifested in breaking the barrier between the park and piazza and bringing them closer to one another. As a result, the park level has been designed to gradually lower towards the canal edge providing a closer connection to the piazza, and in turn, the piazza gradually steps down towards the canal. The vision was to create scale between the two levels and provide visual cues to visitors; offering a glimpse of the park while they meander along the canal edge. This was also achieved by means of various soft and hard landscaping elements such as a grand concrete staircase leading from the piazza to the park, sloping and folding walls, and plants to draw the eye to the park above.

The lower piazza level contains 11 boutique retail units that line the splayed canal-facing walls and form an active eastern edge to the new canal pedestrian route. The intention behind the piazza was to activate the canal via a range of water sports and provide a link between the V&A and the CBD – encouraging a pedestrianised environment. Referencing the battery’s original façade, loosely packed stone-filled gabion walls shroud the parking facility and stone-clad planters contain fynbos and waterwise plants. All stone used throughout the park and piazza was excavated from the site during the construction process. These antiquated elements juxtapose contemporary insertions that reference the battery rather than replicate its heritage.

The materials palette includes a selection of hardy materials that suit the robust nature of the park, namely, concrete, stone and steel. Concrete was chosen as a “material of our time” for new structures as it can be clearly distinguished from historic elements, ensuing little misinterpretation. A precast concrete panel structure dubbed the interpretation pavilion has been built to the estimated height of the battery’s original walls and links the park, piazza and parking facility via internal elevators. To resemble cannon embrasures, three small openings form part of the structure’s canal-facing wall. Historic cannons from Amsterdam Battery found scattered throughout the V&A by the Cannon Association of South Africa and preserved for the development of the park are now on display inside the interpretation pavilion. The artefacts sit on top of precast concrete plinths, made to resemble old timber cannon carriages, allowing them to protrude through the embrasures and overlook the canal.
Director at dhk and lead architect on the project Pierre Swanepoel says, “The intention was to facilitate a new hub of activity within the V&A district whilst being respectful to the heritage of the Amsterdam Battery, once a place of exclusion and incarceration, but now a public space designed to support and engage the greater Cape Town community”. 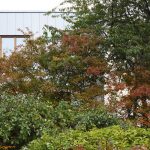 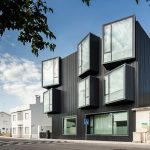