The Rigshospital is well-defined by Fælledparken and Amorparken at it’s boundaries, and due to these park areas, the hospital campus exudes a unique ‘green’ potential. The buildings serve as an intermediary between the dense urban fabric on Blegdamsvej and the open natural areas to the north of the site.
This interconnectedness strongly influenced the concept and form of this scheme, leading to what could eventually become a hospital nestled within a lush, green, natural environment within the bustling urban center of Copenhagen. Challenges. It is important that the Hospital embrace the natural and healing nature of the surrounding parks, but also that the new addition to The Rigshospital also addresses the built context in an appropriate manor. A good hospital expansion must function seamlessly and efficiently with the existing facilities, and should be accessible from all directions. Scale, traffic, and material are concerns that also affect the neighboring buildings, some of which include shops, offices, schools, and housing.

The two main development sites for the hospital expansion offer several special challenges that require especially unconventional approaches. The largest site to be developed on the new campus lies at the corner where park and city meet, and there are other points at which access and circulation become crucial. In this scheme, we hope to satisfy each requirement, while injecting the entire area with nature, helping The Rigshospital to become a comfortable, healthy, and sustainable environment. Visions. We believe that The Rigshospital will play a very significant role in the development of Nørre Health and Sciences Campus. The expansion of the hospital will provide valuable area and facilities for the education of Denmark’s future doctors, and the injection of nature throughout the area will greatly contribute to the environment where people are learning, healing, and recovering. In order to achieve these two goals simultaneously, the points at which the functions overlap are shaped with special care.

This project’s vision is to allow the research and education facilities to function alongside the new park spaces, creating an open and transparent look into our universities, while also providing a comfortable and productive learning environment. The ground level of The Rigshospital campus will become an extension of the surrounding parks, and specific social and educational nodes will be established at points around the park where the new buildings are able to touch down.

The Green Hospital. The building footprint is heavily restricted at the largest development site, due to an existing radiology wing operating underground that must be preserved. Most of the great mass of this section of the hospital must bridge over parts of the existing radiology department, without seeming so enormous that it dominates the more regular context of the neighborhood.

Because we are choosing to draw the park into the site, having to lift the buildings actually helps make that gesture even more powerful. The green areas that flow into the hospital campus help to create relaxing and healing natural areas for the patients and staff, blurring the line between institution and recreation. The new buildings provide open and inviting entrance points, but the primary masses of the new buildings also promote an openness as well. Rather than being closed courtyard blocks, the different wings open out towards the park and the city, allowing light and views for the patients that occupy the upper levels.

The idea of open and green spaces is applied to a number of other sites throughout the new campus expansion, and will help make the entire hospital a very positive and green environment for the patients, staff, students, doctors and visitors.

The Main Building. While there are points where this building touches the ground and holds education facilities, the main mass of this building is lifted one level above the ground.

There is also a vast technical layer tucked within the truss bridge structure that spans over the newly established park level, and pre-op, post-op, and surgery functions occupy the next two floors.

Bedrooms and treatment areas are considered to be private spaces. Because of this relative vulnerability, these areas are lifted several floors above the ground level, on top of the operation levels. That also ensures that people who have to spend extended periods in the hospital have access to plenty of sunlight and that their rooms will look mostly towards a dense, peaceful layer of trees and foliage.

The patient levels have thinner cross section than the surgery levels below. This means that while they can all look out to the nature from their rooms, the patients and visitors can also go out onto a terrace that runs around most of the building, to experience the park without having to go down to the ground level. Research Center. The research center, a series of laboratories and offices continues an extended axis from the Panum Knowledge Bridge, through the existing hospital buildings and into the surgery and education areas of the new wing of the hospital. A large auditorium on Blegdamsvej, at the same scale as the surrounding urban context, terminates the long axis at a plaza carved out of the park at street level.

This plaza exists as the primary entrance to the new educational portion of the hospital expansion, and also provides cafe space that contributes to the social role of the hospital in the neighborhood. Symbolically, the long axis of research and education serves as the spine connecting the new treatment areas to the old. This connection, over and through a continuous green area, expresses the importance of fusing the educational and treatment functions of a hospital with the calming and healing aspects of the natural environment. Ambulatory Building. The ambulatory building is located at the point where the research axis bends towards the new main extension. This building is a place where people come for appointments, so it requires independent access from the rest of the hospital.

At the same time, it may be important to transfer people from this area of the hospital to the more critical care facilities in the hospital, so its placement along the different connecting bars of hospital is very important. 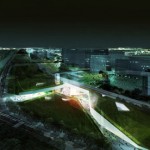 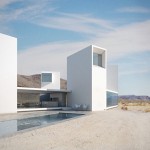