State of the art accommodation, international hubs of creativity and quirky independent eateries are transforming the skyline at MediaCityUK. Changing landscapes has occurred due to the uplift in the area’s reputation through the introduction of more businesses. Salford personifies regeneration and is one of the few areas in the north west that engages with mass investment opportunities, putting the area firmly on the map for all the right reasons.

MediaCityUK is a contemporary cultural entertainment and the core of waterside dining, innovative architecture and urban living which spikes interest, recognition and admiration for Salford’s biggest name. Salford celebrates this hive of activity and glorifies its successes by highlighting the credibility as a media hotspot.

Whilst dominating the north west, Salford has been recognised on an international scale. Home to some of the biggest names in the industry such as BBC, ITV and potentially Channel 4’s new creative headquarters, MediaCity is also complemented by more than 250 smaller media and digital businesses and start-ups.

Large-scale regeneration projects have rebranded Salford and propelled the city into the limelight. The 200-acre mixed-use destination on the banks of the Manchester Ship Canal is one of the first and largest urban regeneration projects in the UK and is increasingly attracting people to live, work and play in this go-to area.

Overtaking London is terms of talent, production and facilities, over 60,000 people now work in the digital industries in Greater Manchester and predictions state this figure is expected to increase by 27% before 2034.

Regeneration raises the appeal of a city for people living in the UK as well as overseas, inflicting a surge in demand for property in the area. With expansion of environment comes expansion of jobs, opportunities and property. Salford proves this sentiment as millennials and young families are residing in the area to seek advantage of the multitude of amenities that add to the vibrancy and diversification of the area. 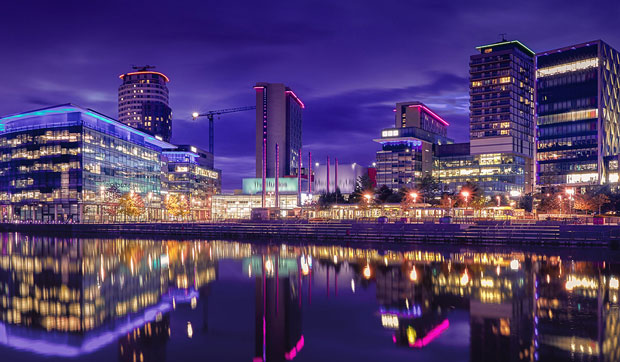 In buy to let property, Salford proudly presents some of the highest buy to let yields in the country at 8.25%, almost quadruple some parts of London. According to property experts, Home, this is due to MediaCityUK being an up and coming hotbed for people wanting to work in or near the area. Luckily, MediaCityUK is accessible by a variety of transport modes, being a well-connected destination helps the city to flourish as accessibility to the city centres strikes major importance for potential tenants.

Suburbs as opposed to major cities are increasingly making an appearance on investors’ radars and Salford is considered one of the top places to invest in the UK thanks to mass regeneration, desirable location and boosts in tenant demand.

RW Invest, a leading property company based in Liverpool recognise Salford’s rising prominence in the property market. Capturing Manchester’s most desirable postcodes, their property portfolio can be found on their website. Evidently, Manchester secures promise in economic growth and RW Invest select key properties designed to secure the most prosperous outcomes.