Through a rearrangement of an embryological, mathematical reference known as “Shrek’s Surface” , spatial varieties are derived as a way to alter the combined experiences of both the spiritual and natural environment in the Arizona desert. The prototypical, curved surface is morphed and manipulated, creating contextual and functional relationships that are then translated into a series of parameters for the building’s morphology.

The beautiful and special landscape of south-central Arizona, presents an experience for visitors unlike any other place. Dry, hot summers with a brief rainy season during mid-summer and late-winter, offers a unique planting palette inconsistent with most deserts around the world. Towering Saguaros, groves of man-sized chollas and prickly-pear cactus, dot the landscape amidst a rocky terrain. Located at the base of the Superstition Mountains—whose name derives from an old tale of a lost prospector whose gold treasure, as well as himself, have never been found—offers spectacular views of the massive mountain and valley floor below. The remoteness of the landscape offers a secluded environment perfect for contemplation and self-reflection.

The double-layered chapel space is surrounded by a continuous hallway at the perimeter which expands inward at each corner. A concavity in the middle area of each side, accommodates separate programmatic functions. Based on the distance from the entrance, this constant passage offers varying degrees of privacy. We believe this is a way to create a cognitive programmatic separation without the use of physical barriers. Different from the universal spatial density of the hallway, the chapel space has a defined hierarchy over the altar. Looking toward the mountain peak, the altar clerestory contains a transparent window differing from the translucent channel glass used in the other volumes. Visitors then communicate with natural changes in the landscape through this window. The glazing above the chapel dome supported by a gridiron steel frame, has a series of operable roof hatches for natural ventilation and passive cooling. Wind passing in-between the raised clerestory volumes, increases wind velocity eliciting the Venturi effect.

Instead of a randomly defined edge on the exterior, the morphed structure is given a strict spatial limitation through the use of a simple boundary. In specifying the functional elements—walls for the chapel, raised clerestories, roof over the hallway, and so on—the structural homogeneity of the exterior boundary regulates the entire spatial variation. We wanted the structure to have a very clear orthogonal sense of both horizontality and verticality in its morphing operations, and experimented with how they coordinated the spatial complexity in strict and constant rules. As a result, the overall structure is acknowledged as an “inserted” entity into a box form, contrasting with typical and regional design custom.

This is clearly a counter experiment from the precedential orthodox and local practice found in Arizona. This proposal brings some objections against collective imageries regarding regional aspects. We see the most common building type here as being composed of a fragmented assemblage with an identically segmented materiality. We set forth an unfamiliar position, one that distances itself from the widespread architectural design methods such as mixing standardized products for custom detail developments, and the study of planar and/or sectional proportions for juxtaposed materials. 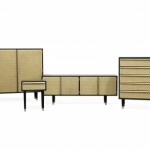