Berlin-based practice HENN Architekten has won competition for the Cenke Tower in Taiyuan. Here is a brief news pieces describing the winning projects: The new tower for the Cenke Group is located on the north-south axis in the centre of the Chinese metropolis of Taiyuan. As well as office space, the building also contains a hotel on its upper floors and a retail centre at the first basement level.

The longer sides of the 280 m high building take the form of convex shells with vertically accented facades constructed from opaque aluminium elements and glass of various degrees of transparency. The trapezoid-like shape reduces successively with the building height in the upper storeys and determines the amount of direct sunlight admitted to suit the planned use of the space within. While the offices receive optimum solar shading and maximum interior daylight, the hotel guests can enjoy the widest possible views over the city. The narrower sides of the tower with their concave curvatures and smooth transparent glass facades strike a counterpoint to the solid, powerful overall appearance of the building. They allow views into the building's interior and show off the elegant, diagonally braced load-bearing structure.

The entrance area is located on the western side of the building along the lively boulevard. A planted sunken courtyard south of the building merges seamlessly into the basement. 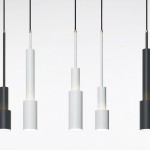 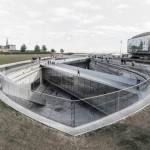