Alex March Studio designed the interiors of the new GSS Security Headquarters in Mataró, Spain. The offices have a marked industrial air and a futuristic point. Take a look at the complete story after the jump.

From the architects: Metal, vegetation and wood are the protagonist in the new offices from the company of security systems instalation GSS Security in Mataró (Barcelona, Spain), designed by the interior design studio Alex March Studio.

Just entering the reception area, our retina already obtains the hallmarks of the entire project: a sharp style with an industrial character, very welcoming and with a futuristic point, which harmonizes with the cutting-edge technology offered by the company GSS Security.

In this area the exposed beam concrete ceilings, along with the bulky and shiny air conditioning ducts, are displayed without ornamentation or dressing to show the bare beauty of the structural elements. The large windows are made of iron carpentry painted in black.

Eclectic, sparkling, futuristic and industrial at the same time

The waiting room obeys the eclectic style that the interior designer Alex March loves to incorporate into his projects, somewhat sparkling and futuristic, with elements such as the incorporation of a large metal bunker in double sheet of gloss stainless steel that goes from floor to ceiling, perforated with large circles. But also, industrial, with another of the walls covered by a melanin panel paneling in concrete effect, topped by a warm white led lighting strip. The artistic wink is provided by a Modern Musset print of the iconic Yoko Ono.

Different mid-height dividers, made of metal and covered with wooden slats, with LED lighting adorned with natural plants, offering warmth and freshness and giving way to a large open-space work area.

In this area, in addition to carrying out an important aesthetic work, the functionality has been fully exploited. On one hand, using resources such as raised flooring, on which a dark wood effect PVC flooring has been installed, on the other hand, working the acoustics, thanks to spacers between the workstations formed by metal profiles and micro-perforated metal sheet. Likewise, five square panels with acoustic function have been arranged on the back wall, they are made of felt in different shades of gray, backlit with LEDs.

Lighting is another of the key points of the project, thus, the workstations have corrugated pendant lights, tailor-made for the project, with details such as the milled company logo. In other areas, Led strips in warm white have been used to achieve more cozy atmospheres thanks to indirect lighting. On the other hand, huge rectangular shaped luminaires made of black metal profiles and led strip with diffuser give the precise light in the open space area.

Dark and metallic hues dominate the bathroom: black doors, ceramic tile cladding in shiny black squares that alternate with a gray cladding made with zinc plates on the ceiling.

The space for the dining room-kitchen follows the industrial style of the project, although the warmth of the oak wood of the large table and its chairs provides a cozy aspect to the whole.

The noblest area of the offices, the management office, is where the futuristic air is most casual. The furniture stands out for playing with metallic reflections, with a predominance of curved lines and a neutral color palette, which is committed to combining black and white. The shelf designed by Alex March Studio stands out, made of glossy stainless steel, with six large circular openings as shelves.
Black iron carpentry with vinyl glass is the common denominator for compartmentalizing offices, since it allows light to pass through but at the same time offers privacy. For the flooring in these areas, gray carpet installed on raised floors has been chosen, due to its greater safety for the worker, greater comfort and better insulation.

In the meeting room the floor is black iron, installed on raised floor. In this area, where the bare ceiling is also industrial in cut as in the entire project, wood is the allied material to achieve affability and comfort. In this way, one of the walls has been clad in oak wood paneling, finished off with a warm white LED strip that adds more warmth. The large meeting table is also made with an oak wood top and has built-in connections.

In short, Alex March Studio has worked intensively on this office project, achieving an interior design with an accentuated industrial style, very welcoming and with a futuristic touch, which harmonizes with the corporate identity of the GSS Security company. 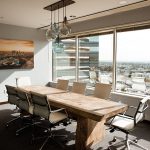 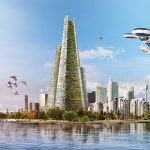