We were inspired by the spirit of the place and our time. In our concept we created a place that is rooted in the original structure of the square but still up-to date. We also aimed to strengthen the connections of the square to its surroundings. Our main ambitions were to balance the historical and modern elements and connect the existing and new elements of the square in harmony.

Strengthening of the public functions was one of our main aims in order to fill the square with life. After the designed reconstruction the square will become the public centre of its surroundings and the local inhabitants. The northern part of the square designed by Béla Rerrich in 1929 will be reconstructed according to the original plans. In the axis of the Reformed Church and the school we suggested paved walkways to connect the old and new, the contemporary and historical parts of the square organically.

The public square becomes more and more urban towards the Üllői Street. The parks green woods create the public space towards the Üllői Street. It works as a transition zone to the busy street, the old park and the connecting public spaces. The paved open square in the centre is sensitively drawn by the existing main traffic lines, it takes in and divides the walkers. Providing a paved, but still green park with water surfaces, seats, gardens and cafés, the square becomes a place to stay, which is able to become a public centre.

We opened the borders of the square to communicate better with its surroundings. We continued the grass between the tram tracks. The pavement of the traffic island was connected with the parks pavement in order to strengthen the connection to the Üllői Street.

At the northern part of the square we extended the square to the façades of the buildings. A meeting and program square was created in front of the school and the church. The fence of the churches was pulled back to the line of the façades in order to bring the buildings closer to the public park and activities.

At the eastern side of the Thököly Street we made the connections to the square more intensive.

The promenade fuses with the Kossuth Square beside the Üllői Street. The promenade runs at the southern part of the square and connects the park and the street.

The heart of the walkways is the public space at the southern part of the Kossuth Square. It has a multiple function: besides becoming the main public space it organises the main traffic lines.

The pavement of the square is referring to a graphic of Béla Kondor from 1963.

The images of people (Béla Kondor: Drawing 1963) in the pavement are referring to the square's role to form a community. The concrete figures are in the same level with the cut basalt pavement.

These concrete elements provide the borders of the waterfronts and the gardens, sometimes they  emerge from the ground as seating.

An open pavilion is placed at the eastern corner of the public space to lead in from the main traffic axis. The building borders the green with open, glazed surfaces and covered terraces. 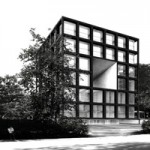 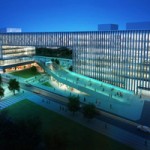