The purpose of this competition is to establish a design for the Paliourokampos Park, which will host a wide range of activities, accessible to the city’s citizens.

The design for the new park at Latsia included the incorporation of different indoor and outdoor facilities in a particular site that looked as the remnant of the urban development of the area. The proposal was based on the spatial dialectic  of  two basic zones that open up on the different ‘rooms’ – functional units  of the program.

A.      The ‘balcony’, that includes the main zone of circulation and the main entrances of the park.

B.    The ‘river zone’, a central zone at the lower level of the park that is formed by two slopes. The one allows the continuous interconnection with the balcony zone and the other follows the northwest boundary of  the site suggesting a buffer zone between the  park and the surrounding urban area.

The central aim of the proposal was the  diversity of views and experiences through the formation of a fluid landscape in different ground  levels.  The suggested plantation includes native trees plants and flowers that are organized in zones that either penetrate or follow the main paths of circulation. Vertical Zones of high plantation function as  curtains  that  control the view and suggest a variation of impressions according the different annual seasons.

Through the manipulation of  the balcony and the inclined ground, three main 'rooms' are formed. These are treated as containers of specific outdoor and indoor facilities, which per room form a cohesive functional unit and assign a distinctive character to each 'room', such as educational, recreational and sports area. 'Room A' is the container of the educational uses of the program, such as the center of environmental education and the outdoor amphitheater, 'Room B' stands for the recreational uses, including the cafe-restaurant, the children playground and the outdoor cinema while 'Room C' contains the basketball and tennis courts and is therefore conceived as a sports area. The indoor facilities are formed as part of the landscape and are mainly placed below ground. 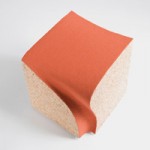 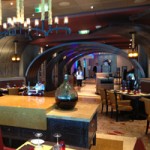