Architect Lalo Carrillo teamed up with Matteo Colombo and Andrea Serboli at Colombo and Serboli Architecture and Adán Yenerich and Rodrigo Schiavoni at SY Arquitectos to design this stunning 140 m2Asado pavilion and guesthouse. in Córdoba, Argentina. Take a look at the complete story after the jump.

According to RAE (Real Academia Española), the word quincho, widely used in Argentina and Uruguay, defines “a shed consisting of a thatched roof supported by wooden columns or other material; It is usually built in the garden of a house or in its back, and is used as a shelter against rain or sun in outdoor meals.” The word derives by “quincha”, an ancient Quechua word that defines a traditional construction system of South America that consists of a threaded cane or bamboo covered with mud.

In Argentina, having asado (cooking meat on embers, similar to barbecue), more then a culinary tradition is an art, or a religion.

Basically it’s a ritual. Argentinians now use the word quincho to define a construction made expressly to prepare and enjoy a good asado. This is generally a family business, since the variety of pieces of meat and their dimensions are big. It’s a shared meal, and the construction can be simply a barbecue, a covered shed, or a proper building.

When our clients bought the property next door to their ’60 existing house in a small town in the Córdoba countryside, to widen their garden, they decide to commission the construction of a new building in the newly acquired plot: a quincho, specifically for making asado and family gatherings.

The wish was to have a big dining room for family and friends, visually and physically totally open to the garden but with the chance to close it completely. In addition, a double bedroom for guests, with a bathroom, had to be designed.

Formally, this new pavilion had to establish a conversation with the white-painted brick walls forming the existing mid-century house that has a distinct design, being surmounted by a thick, charcoal-colored roof volume that surrounds the villa.

The choice had been to recall the solid brick volumes of the white original building in the new construction this time in natural brickwork, like in the asador itself, a thick but slender chimney-like volume clearly expressed on the side of the building, the taller element of the building.

A pristine white, cantilevered roof contrasts with the walls, wrapping around the bricks block, forming a gallery that blurs the transition

between indoors and outdoors space and giving shelter from the copious summer rains. This thin white roof, in relation to the thick, exposed brick walls of the structure below, establishes a relationship somewhat similar to the one of the thick, dark grey roof of the existing building, still without imitating it.

A Cassia Fistula tree happened to be on the corner of the gallery area, so the architects made the decision to punch two round holes, one on the floor slab, another in the roof itself, allowing the tree to remain, grow through the roof and blossom its bright yellow flowers cascade in summer, just above it. The plot had been abandoned for decades, so other grown plants and trees have been carefully kept during the site works and taken in account in order to make the most of them once the project was done and the garden enlarged.

Another architectural element in the gallery is a corner seat, cantilevered in concrete within the nook of the facade brick wall. This cozy corner is thought to contemplate quietly the garden, drinking mate, the national drink.

On the inside, a spacious patio divides the dining area from an en-suite area with a spacious guest bedroom and an intimate bathroom with diagonal views on the patio. Taking advantage of the one story building, the shower has a light well placed right on top of it, bringing extra natural light. The bedroom volume protrudes towards the garden to add intimacy to this more private part and to have an even closer relation to the luscious green outside.

On the other side, the existing pool had to be divided from the new building for safety reasons, given the family has one kid with special needs. A simple white metal fence was placed for this purpose. One of the project’s key pieces is the asador, the brick oven where the asado is made.

Often these items are placed outdoor, but the family final choice was to have it as part of the dining in order to have the cooking family member enjoying the same space as the rest, rather then work isolated. The cooking space has been divided in two to allow one side for a pizza and bread oven. The big kitchen has everything for the preparation of the food, wide countertops and plenty of cabinets and storage space. All the kitchen doors are in cedar solid wood, adding its very warm finish to the room. The same solid timber has been used for all the doors, storage and paneling. The building has been furnished with pieces from the family, as well as new designs.

Four original Diamond chairs by Harry Bertoia, in the house since the ’60, were restored, provided with new cushions that matched the ones of the corner gallery seat and placed on the poolside. An old, big, solid wooden table is the center of the dining room, surrounded by Windsor chairs also belonging to the family for decades, along with other new chairs. Family heritage are also the Persian rugs used both indoors and outdoors and the thonet-style, hay rocking chair. Abstract art pieces by Rodrigo Schiavoni (one of the architects collaborating in the project) give the finishing touch. 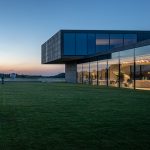 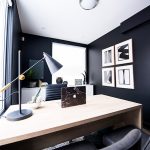