Project: Housing Competition
Designed by 2:pm Architectures
Project Team: 2:pm Architectures + L. Cendrier + S. Delhay + M.Honorat
Location: Genève, Switzerland
Website: www.2pmarchitectures.com
2:pm Architectures shares with us their project shaped for a location in Genève, creating their entry for this housing competition the architects opted for a bold and striking exterior solution. Discover the rest of the project along with the corresponding description after the jump: Alignment / Public Space. The parcel is bordered on the south-east by a housing building and the north-east by a house to be maintained. The building of parcel A is implanted parallel to the existing building on the road to St. Julien. The building of Parcel B is align with the future building on next plot, it shrinks on the way to Marble, clearing the perspective of the street and offering an expansion of public space. The two buildings are connected by the ground by an open, mineral public space animated pand facilitated by mineral activities and businesses of ground floor and entrances, using friction entrances of homes and business. Materiality. The materiality of the facades resonates with the two faces of implantation. The building of Parcel A, the first built, will be in dialogue for an indefinite period with the existing housing building. The project proposes to give it a concrete materiality, as the existing, to strengthen the desire for dialogue between the two: the fade. The building of Parcel B, built in the second phasing, will be in dialogue with the future buildings of the area and the building of Parcel A. It expresses a brick facade frame similar to the first building differing in its materiality, will of Roger Diener for the urban plan: the chained. The difference in color is based on a desire for separation of the two buildings, one way to mark the richness of the succession plans and to give quality to the central shared space.

Prospect. The building structure is oriented at 45 °, to give the more distance possible between facades. With a traditionnal alignement with the existing the « vis-a-vis » would be 23m, with the implementation proposed the farthest points of the front offer a distance of 33m. The buildings « épannelage » proposes a building of two levels low on Parcel A and the two towers are positioned in a way to allow the best natural lightning.

Timing of Treatment / Fading. The parcel is located in the heart of a business and industrial use. The buildings are marked by the typological presence of hangars, warehouses and office building.

The urban plan proposed by the architectural firm Diener & Diener puts forward a process of construction related to time and memory building. Each new building or complex of buildings is dependent in its construction of the relocation activity that remplace.Le project proposes to express the sedimentation of constructions. In keeping track of the location of what was present, it proposes to take into account this urban sensibility in the plot and its phasing. Time 1: Parcel A building, appearance of the footprint.

The first building of the operation taking place on the plot will trace the demolished building.This architectural attitude consider the past industrial activity and the site as a heritage. In his intentions text, Roger Diener expresses the poetry of the area, including the conservation of typical streets and walls. The project integrates and interprets the typologies that were present and whose traces remain in the new face of the district. Stratification. The project expresses three heights, three positions relative to the environment. It proposes a mix between housing and activities by superposition. The density of the operation is expressed as a single unit by a programmatic hybridization.

1.The inhabited footprint: the first three levels are dedicated to the activity. Two levels of 4m high and a level of 2.85m high. This third level is considered as an adaptive floor space.

2.The relation to the context: the three levels (Parcel A) or 5 levels (Parcel B) of housing that overcome activity levels are directly related to existing and proposed buildings. They offer accommodation to 2.55 m high, and 10m² outdoor space according to the size of the appartment. The 45° apartments rotation compared to the implantation increases the perspective inside the inner landscape of the neighborhood.

3.The link to territory landscape: the emergence of 9 and 11 floors are below the threshold of 50m. Open views reign over the existing buildings and enter into dialogue with the existing 18 story tower and the towers projected. The large landscape is invited into the appartment. Fonctionnality.
1.The core: The four cores offer in the low levels to link activities and housing. The high levels cores serve consistently 4 apartments and are naturally lit and ventilated.

2.The apartments: the frame offers open but intimate appartments. They turned to their own living rooms. The living room is visible from the rooms by the facade. This proximity gives the visual quality of an apartment house with patio. By opening the two large windows of the living room, the outdoor space becomes part of the apartment in its use and circulation. Each room has its own terrace or access to a terrace. The duplex apartments offer double height by framing on the large landscape. The winter gardens are positioned gradually amount to provide effective protection to the wind and the possibility of making a temperate plus piece. 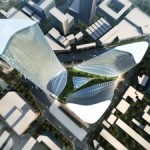 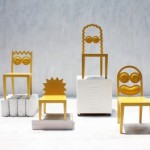